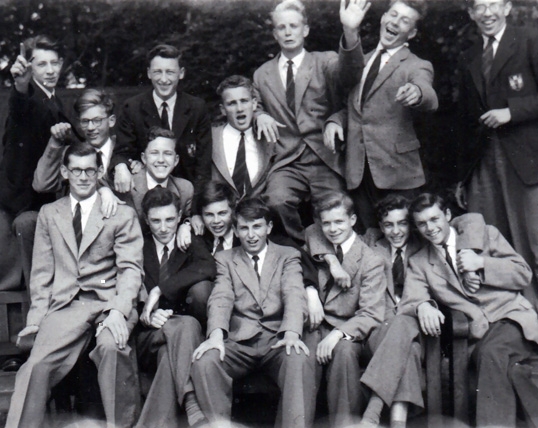 Tin Hut Times! Are you in this 1954 photograph?

Malcolm Jenkins (H. 1951-55) writes reading the August newsletter about Sir John Chilcot, O.B. President, prompted me to revisit an old photograph taken circa 1954, of some of the inhabitants of Hampden House, including John Chilcot. The photo was taken at the top of the bank, which was out of bounds to all but prefects’ feet, with the old tin sheds which housed Hampden at the time, in the background!

My memories are a bit thin after 56 years, but I remember the cold shower initiation for new boys & some “intimidation” from seniors, the mini-snooker table in the Senior Common Room, fagging & the bell, being beaten by David Nelson-Smith with the cane, a military swagger stick, which broke across my backside. Shooting in the armoury when I should have been on a cross country run (the method was to be at the back of the runners & passing the armoury to turn sharp right to disappear – worked every time!). Especially I recall with pleasure learning, in particular German with T.R. Davidson, History with Bill Stewart, chaotic Latin with Major (CCF) Page & of course many others.

I recall enjoying House rugby at the New Ground but not being too keen on the athletic Standards in the autumn term. When in the C.C.F I won a flying scholarship & the R.A.F. taught me to fly at Shoreham. I subsequently failed to make a flying career in the R.A.F. but carried on flying, latterly my own aircraft & ceased recently in 2003.