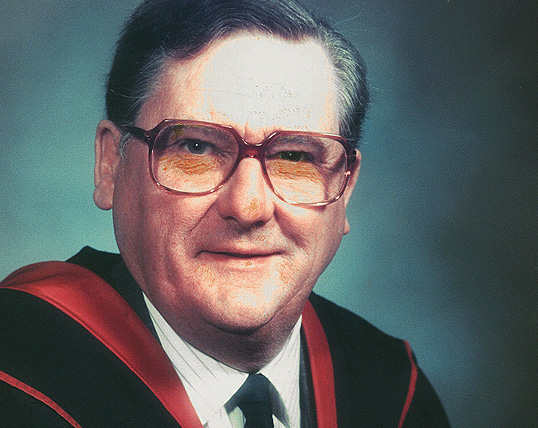 The archivist continues his series of profiles on our past Head Masters, focusing on every former Head Master since the Second World War. We now turn to William Blackshaw, who would prove to be one of the most transformative Head Masters of the period

Born in 1930, William Blackshaw was educated at Sherborne and Hertford College, Oxford, where he read French. Blackshaw served with the Royal Navy as a Russian interpreter, during which time he represented the Royal Navy at cricket against the other two services.

After his naval service, Blackshaw spent 16 years at Repton School, where he taught modern languages, ran cricket and was a housemaster. In 1971 Blackshaw was chosen to succeed Henry Christie as the Head Master of Brighton College, arriving with his wife, Elizabeth, and their three children, Ben, Jimmie and Ellie.

Perhaps the biggest decision that Blackshaw took as Head Master was that Brighton College should become co-educational. This huge change to the life and culture of Brighton College was all the more remarkable having been made by a traditional housemaster from a boys’ country boarding school. This decision would prove to be an essential foundation stone for Brighton College’s future development and its success over the next fifty years.

The introduction of girls began in 1973, initially in the Sixth Form. Brighton College was relatively early among public schools in doing this and what made Brighton College unique was that this change was not a result of declining numbers of boys, as was the case for many other schools.

Blackshaw outlined a different motivation: ‘What I was really trying to do was to boost Sixth Form numbers and I wanted to improve music and drama.’

The introduction of girls helped turn College into a much bigger school during the 1970s and 1980s, allowing it to carry out building projects for the first time in decades.

In his final report to the Council, Blackshaw referred to himself as ‘Bill the Builder’. The sobriquet is appropriate, as he presided over the busiest period of building since the Dawson era half a century earlier. This included the creation of the Sports Hall (funded by a generous donation from Sir Thomas McAlpine), the complex of classrooms on the west side of the Home Ground, the Lester Building, and the enlargement of the original Music School. A new dayboy house was founded, named after the philosopher: Gilbert Ryle (Ha. 1910-19).

The Junior School moved from a building opposite the College to Walpole Lodge, the site of a girls’ convent school, where the Prep School remains to this day.

Although most of Blackshaw’s architectural legacy has now had to make way for a new generation of innovative College buildings, The Blackshaw Gym, based within the new School of Science and Sport, commemorates Blackshaw’s drive to improve the College’s sports facilities.

Blackshaw and the Arts

During his time at Brighton College, the athletic housemaster (a gifted hockey player as well as a cricketer) from Repton emerged into a cultural polymath. Blackshaw directed a fine production of The Cherry Orchard, was chairman of the Brighton Youth Orchestra, a member of the Brighton Festival committee, and creator of the Burstow Gallery.

Blackshaw was also a talented watercolourist. Painting was his way of relaxing and he seldom went anywhere without his sketchbook and paints. He was generous both in giving his paintings as gifts and in selling them for various College projects. His painting skills were rewarded with honorary membership of the Royal Watercolour Society, an honour which he shared with Prince Charles.

Blackshaw’s passion for the arts was translated into a vision of a broad education at the College, with the pupil experience enriched by exposure to high-quality music, drama and art. In 1978 the Great Hall’s foyer was transformed into an exhibition space, the Burstow Gallery. Blackshaw’s vision culminated in a 1982 Brighton Festival exhibition entitled ‘Picasso and the Theatre’ at the College. The centrepiece of the exhibition, Picasso’s 10-metre-high Le Train Bleu curtain, was hung in front of the stage in the Great Hall. The exhibition boosted the national profile of the school, while also netting the College a tidy profit, by drawing in thousands of paying visitors. Blackshaw described the publicity surrounding the event as 'beyond price.'

In the end, most of Blackshaw’s innovations as Head Master had an enduring effect, albeit at a challenging time economically, which forced him to hone his business skills and make difficult decisions. He shepherded the College through these challenging times with great resolve and determination.

Despite Blackshaw’s fears about declining pupil numbers, when his final year at the school began, in September 1986, there were 488 pupils – not far off the 500 for which he had hoped for, and higher than at any previous point in the College’s history since the Dawson era, before the Great Depression. However, a decline in boarding pupil numbers remained a problem, with Blackshaw even fearing that boarding would be extinct by the end of the century.

After their retirement in 1987, Bill and Elizabeth went to live in Rottingdean but remained in close touch with College life. Bill died peacefully at home on 27th May 2016. His funeral service at St Bartholomew’s, where he and Elizabeth worshipped, was attended by a huge congregation of former pupils, staff and friends. On 21st April 2017 a memorial service to celebrate Bill’s life took place in the College Chapel, and a plaque was dedicated to him. The chapel had always been the spiritual centre of College life for him.

Blackshaw was by many measures an old-fashioned headmaster. He was also a natural leader, who inspired great affection among many members of the College community but at the same time an intimidating figure for some. He could be stern when faced with wrongdoers, but equally, his kindness and understanding of human frailties knew no bounds. He and Elizabeth were also highly sociable, and the Headmaster’s house became the focus of many social events.

However, what cannot be denied is that Blackshaw, through bold gambles and ambitious initiatives, has earned a place as one of Brighton College’s most memorable Head Masters.