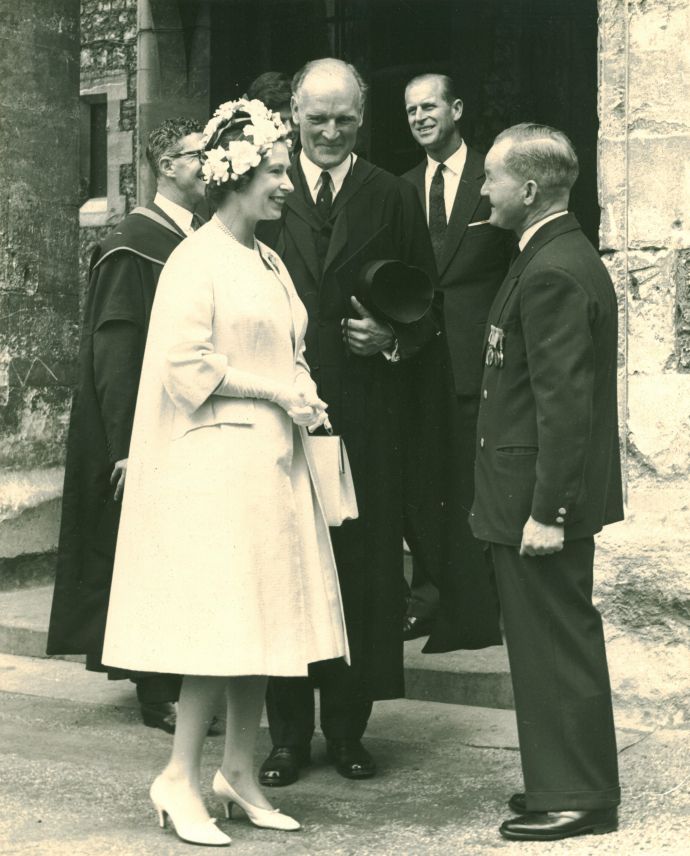 As the world looks back on the life of Prince Philip, Duke of Edinburgh, we remember his visit to Brighton College.

In 1962, the Duke accompanied the Queen to the College and our archivist, James Harrison, shares these memories of the day found in the October Brightonian, printed in 1962:

Almost subconsciously I had noticed how slight and pretty the Queen was, and how even Prince Philip was overshadowed in height by the Headmaster (William Stewart).

The Crown had been for a few moments in our midst; the sceptre had touched our lives. All had come under the spell of Royalty, embodied in the person of this beautiful woman and lively, urbane Prince.

The Queen and Prince Philip signed photographic portraits of themselves, which will hang either side of the Library door; they also signed the first page of a new Distinguished Visitors Book, presented by the Archdeacon of Lewes.

I could not think of any questions I would be ashamed to answer, but one has often read of Prince Philip’s ability to probe into any sham, and I wondered if my confidence in the College was due to my being too close to see the flaws. The Prince first asked me the number of boys in the College (which he wanted to know exactly) and, as I introduced him to the Housemasters, whether any of them were Old Brightonians. He was the first to notice Mr. Burstow’s tie. He guessed, of course, that the Industrial Fund had helped us to build the new laboratories. In the Swimming baths he asked me whether boys here attempted the Duke of Edinburgh’s Award, and I said that we seemed to occupy their time a good deal with games and the more conventional C.C.F. activities. He said he did not feel this should preclude our encouraging boys more to seek this award.

After the Queen had asked for a holiday for the School, he told me that in Bermuda he was asked, without warning, to speak to a large crowd of schoolchildren, and so he started by asking for three days’ holiday for them, whereupon the Director of Education fainted!

I am sure the Duke is a man to put his finger on all humbug, but he certainly did not want to make Brighton College feel the least uneasiness. I hope that I represented the College even half as well as he represents the country which his wife rules.