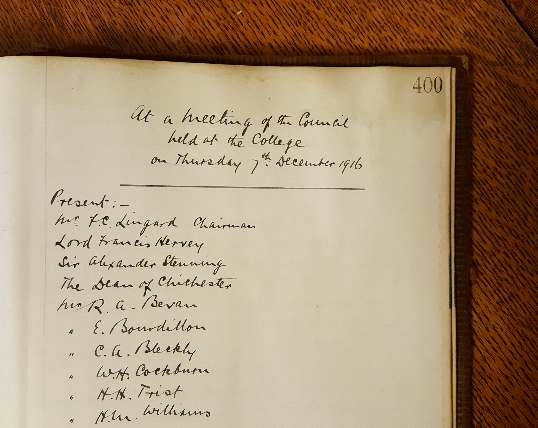 You may remember that last time we delved into the wonders of the Brighton College minute book, the Council (now the Board of Governors) decided they would persuade Phoenix to pay for Anti-Aircraft and Bombardment Insurance for the College.

This was on the 5th October 1916; this week we discover what happened during the following council meeting on the 7th December. Unfortunately, the council’s persuasive skills were not quite up to scratch. Phoenix ‘refused to bear any part of the cost’, but agreed to put £42 pounds as loan towards the total of £76, as was the previous agreement.

In much more worrying news, there was also talk of the possible requisitioning of Brighton College by the War Office, who despite saying they would only use the building ‘as a last resort’ if they were under ‘great pressure’, would have probably required the pupils and staff to relocate elsewhere. Not only did they intend to kick out the inhabitants of the school, but they were also intending to requisition all schools nearby, so we can assume the members of Brighton College would either have to do some serious travelling to find a building, or conduct lessons on the beach (which would not have been ideal, especially given it was December…). Fortunately, the school was able to refuse the request made by the War Office, meaning that academic life could continue within the College.

Bad news for the boarders though - boarding house fees were likely to be raised by £2 a term.