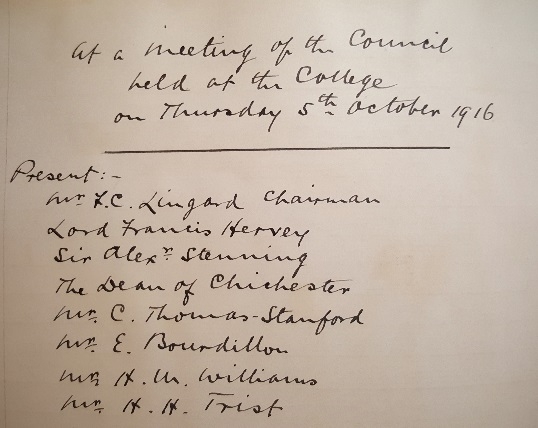 On the 5th October 1916, the Governors of Brighton College met to discuss the usual issues important people discuss.

This included: the school’s financial situation, insurance, the number of pupils, and the roof (the chairman came to the excellent conclusion that the roof would not need any further repairs for the remainder of the year).

The governors also discussed the Anti-Aircraft and Bombardment Insurance (luckily we don’t need this one at the moment what with the lack of bomber planes flying over Brighton College) required due to the continued threat of the War. They decided it would be best to make Phoenix, the company who owned the school, pay for this one, as it would be mutually beneficial to avoid having a pile of rubble instead of a school - and it would be especially beneficial to the governors to cut expenditure what with the huge debts the school possessed. However, things were looking up!

A general improvement financially was to be anticipated with the addition of 52 extra boys from the last year.