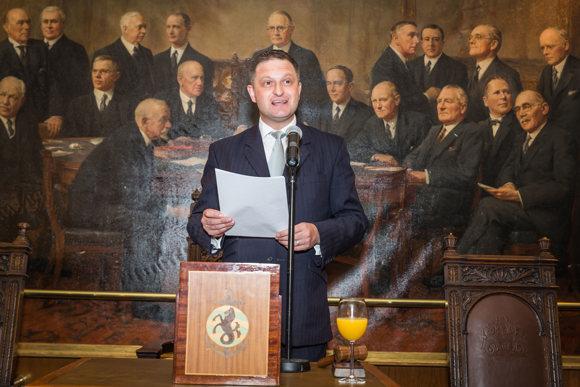 We caught up with David Gold (BCJS./Sc. 1983-91) about why he feels so passionately about giving back to Brighton College.

What are your favourite memories of your school days at Brighton?

If I think about Senior School, I think about School House, and I think of Gerry Guthrie, who was our housemaster. He was the most fantastic paternal figure to have in your life growing up. Some how he managed to make everyone feel good about themselves: he never pretended to be your father, but you always felt like he had your back, and he would always give you a push if you were slacking and not taking the opportunities that were there.

The camaraderie and friendships in that house were special. I made friends for life at school, and we formed such close bonds through our shared experiences.

And, of course, the drama productions. I used to resist them, but Simon Smith and Philip Robinson would be rather persuasive (i.e. Simon Smith would make me get involved!), and then we would get to the closing night and I’d wonder why I was ever reluctant. Whenever I see Simon, he reminds me of my performance in ‘Three Sisters’, and the fact I could not really remember my lines…

What did you go on to do?

I was determined to be a lawyer, and John Leech told me I must not do a gap year, as he knew if I took my foot off the pedal, I would struggle to get back on the road! I went to Royal Holloway for my undergraduate degree, and took a Law conversion but only passed half of the course… So, I went to work in parliament, and worked for William Hague. I became a lobbyist after that, and now I work for Royal Mail as Director of External Affairs and Policy. I still get my fix of politics!

How did your time at Brighton prepare you for your life after school and university?

Several things. A sense of independent living – you can spot the people who know how to organise themselves a mile off once you start university. More importantly than that though, self-reliance and being able to look for the signposts on where you want to go in life. It also gave me a sense of self-assurance and confidence. It, of course, was not in the curriculum at Brighton, but it was in the ethos of Brighton. Particularly when I was there, it was a very liberal school. In the Sixth Form, however, we really were treated like adults, and there was an understanding amongst all of us that our success was down to us.

Why did you decide to leave a legacy gift to Brighton College?

One, I give modestly to the school now, but I am very conscious that when you have been lucky in life there is a desire to give back. When you are thinking about what happens when you leave this earth, there are opportunities to give a lot more than you might be able to whilst you are still here.

Secondly, I think that a Brighton College education is so special, but it is not something that everyone can have. I know that the College is trying to extend its reach to children who might not be able to afford it, and I want to help with that. I had help with going to the school, and I want other children to have the opportunities I did. And who knows what those children will go on to do.

The third thing is that I want Brighton to carry on what it is doing what it’s doing now – one that remembers its roots and wants to give a great education to local kids. People look at Brighton and assume its built on a great financial foundation: but of course, it’s not.

What would you tell anyone thinking of leaving a legacy gift to the school?

First, think about where you would be if you did not have the education that Brighton gave you. And if that does not persuade you, think about the education that today’s children are getting (which is very different from the one that I had!). And if that does not persuade you either… maybe the tax advantages will! Often even a modest house can be hit quite hard by a tax bill, and so leaving money to charity can be very advantageous. I would rather trust Brighton College to spend my money than any government.

I hope that people will think about writing a will and think about financial planning: your hard-earnt money could go into a big government pot, or it could make a huge difference to a child – and who knows what that girl or boy could achieve.

What difference do you hope your gift will make?

Above all else, I wish that everyone could have an education that Brighton can give, but we do not live in that world: I just hope that as many children as possible can benefit from it in the years to come.