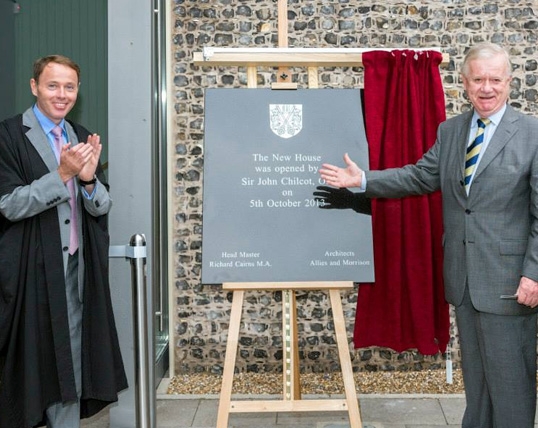 2013 Christmas message from our President

Christmas is a time of giving and of time spent with loved ones, and wherever you are this Christmas I wish you well. I am tremendously proud of my connection with the College, and especially with the Old Brightonians. This year I read with great pride about not only the achievements of the school, which are nothing less than astonishing, but also of the wonderful acts of kindness and generosity within the Brightonian community. In his end of term letter Richard Cairns wrote of the sense of community that the College enjoys; 'I want everyone who leaves here to feel that by their presence they can make the world a little bit better. I want them to recognise that they can make a difference and should.' I would like to urge my fellow OBs to embrace this philosophy.

Giving of yourself, either spiritually or financially, to a cause is hugely rewarding. This year I have been so impressed by the efforts of Joe Carter (S. 2002-07) and Chris Carter (S. 1999-04) who completed seven marathons in seven days and Ed Doyne Ditmas (D. 1999-04) who undertook five marathons in five days to raise funds for Prostate Cancer UK. Former OB President Jane Haviland (F. 1979-81) ran the BUPA Great South Run for Cancer Research, and Nigel Best (S. 1974-79) completed a London to Paris bike ride for Kidney Research. Former Head of School Cameron Dashwood (H. 2008-13) ran the Brighton Marathon for the the Whitehawk Inn. Ashlea Branch-Parker (A. 1994-08) is climbing Kilimanjaro for Moving Mountains and even as I write Tony Hawks (A. 1976-78) is travelling "Devon Coast to Coast with a Pig" in aid of the Tony Hawks Centre for children with cerebral palsy in Moldova.

Most poignantly though I would like to give a special mention to Miriam Bremer, wife of Alex Bremer (R. 1979-83) who undertakes such stalwart work supporting the OB office. Miriam and Alex lost their beautiful two year old daughter Lizzy to Neuroblastoma this year, and Miriam has thrown herself into fundraising for The Neuroblastoma Society. The OBs who are close to Alex and Miriam have been a huge support during these dark days, and I hope that this is because we are so much more than just an association or a network; we are a family of fellow OBs. Collectively we stand by one another and for one another.

OBs have also supported the College both financially and with their time and I would like to add my heartfelt thanks to you for this. To every donor and volunteer, thank you on behalf of the College and of the Old Brightonians. Education is such a great gift, and your support is essential to the success of the College. Lord Robert Skidelsky (C. 1953-58) and Richard Cairns have a wonderful vision for the future, one I wholeheartedly support. There are a number of projects ongoing at the College that you are able to get involved with, many of the facilities are in dire need of improvement and there are boys and girls whose time has yet not begun at the College, whom you can all help. And who knows what they might go on to achieve.

We have all been fortunate enough to have a Brighton College education, and it is with our support that we can ensure the future success of this wonderful establishment which has given us so much. Richard also quoted the late great Nelson Mandela in his letter, which reminded me of another true campaigner, Martin Luther King Jr

"I said to my children, 'I'm going to work and do everything that I can do to see that you get a good education. I don't ever want you to forget that there are millions of God's children who will not and cannot get a good education, and I don't want you feeling that you are better than they are. For you will never be what you ought to be until they are what they ought to be.' "

My good wishes to all Old Brightonians, and a very merry Christmas and a happy New Year to all of us.