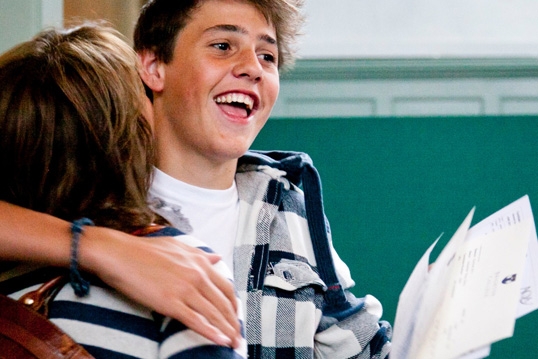 I am writing with very good news regarding our GCSE results which pupils are collecting this morning. The boys and girls should be delighted. They have smashed the college record. Most importantly, every pupil achieved results that they can be proud of – whether that be ten A* grades or a mixture of A and B grades. Every set of results is personal, special and equally valued.

For those of you who like to know the overall picture, the percentage of grades at A*/A this year rose from 83.0% to 90.3%. The historical pattern over six years has been as follows:

The percentage of grades at A* is also very pleasing, up from 42.7% to 52.0%. The historical pattern over six years has been as follows:

I am delighted with these results which put us on a par with many of the most highly selective schools in the country which, as you know, we are not. It speaks volumes for the ‘added value’ of a Brighton education. These will comfortably be the best GCSE results in Sussex.

I can also confirm that our A-Level results were indeed a record. After a few positive re-marks, the A*-B percentage has risen to 95.5% and the A*-A percentage to 77.2%. These should be in the performance tables published in the national press this Friday evening (Evening Standard) and Saturday (The Times, Daily Telegraph). As with the vast majority of independent schools we publish our results in this form and on our website.

In the meantime, enjoy the long weekend. I look forward to seeing you all next week.