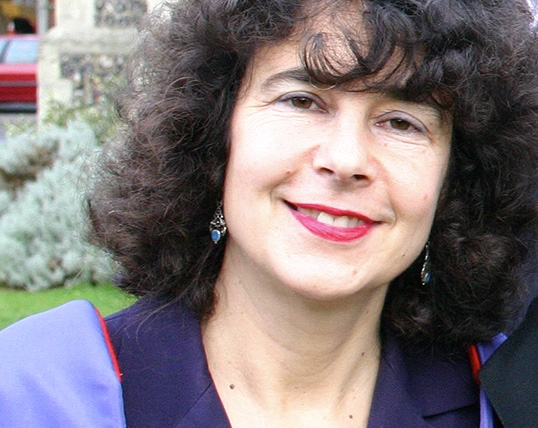 I am very sorry to be writing to let you know that Dr Joanna Seldon died on Tuesday 6 December after a long illness that she faced with much dignity and courage. She died peacefully, surrounded by her family, who have supported her throughout with great love.

Joanna arrived at the college, with Anthony and the children, in August 1997, and remained here until December 2005 when Anthony became Master of Wellington College. As Simon Smith relates, she certainly fulfilled the role of Headmaster’s wife admirably, hosting countless events in the house and being an ever-present and colourful figure around the school, often accompanied by Toby the Golden Retriever. But she was a distinguished academic in her own right (both Seldons were PhDs) and it was not long before she became an incredibly important member of the English Department. She immediately endeared herself to her pupils: she was a natural and highly stimulating teacher and one who so obviously put her pupils’ interests first.

One of her great legacies to the school was to foster an interest in creative writing. Again she led by example: as her website testifies, she was prolific and accomplished as a poet and a short story writer. The evenings of music and poetry readings she organized were popular. She was a persuasive speaker too: her addresses in chapel and elsewhere were always beautifully crafted and memorable. She also did much to serve the interests of Jewish members of the school, ensuring they were exploring their own faith whilst the rest of the school attended chapel services. Joanna truly lived the life of the school; she was admired and respected by fellow staff, pupils and parents alike. She was, of course, also married to one of the foremost headmasters and educationists of our times, and her support for Anthony, and her whole family, was completely unwavering, even after her illness took hold. Brighton and Wellington were indeed fortunate to have had someone like her at the heart of their communities.

From a personal point of view, I was thrilled that Joanna was able to attend Speech Day this year and it was an even greater honour to sit next to her at lunch afterwards. She was already suffering ill health but was incredibly upbeat, interested in everyone and everything around her. I should very much have liked to have been one of those many hundreds of pupils who had the privilege of being taught by her.

A memorial service will be held in London in the new year, details of which I will pass on in due course. In the meantime, we all extend our heartfelt sympathy to Anthony, Jess, Susie and Adam.