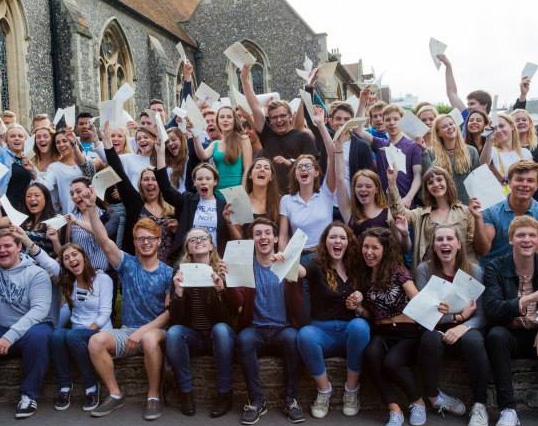 It has been a busy and emotional day at the College as our Upper Sixth received their results. I write this afternoon merely to put some further flesh on the news I e-mailed out to you this morning.

Essentially, Brighton sixth formers have bucked the downward national trend again, with some stunning A-level results, including a record number of grades at A* (an impressive 181 A* grades in total). The College also celebrated another rise in the proportion of grades at A* and A, those grades demanded by Oxford, Cambridge and other elite universities.

Incredibly, 100 boys and girls secured AAA or better in their results, with 44 achieving at least A*A*A and 26 confirming their places at Oxford and Cambridge, including five to Oxford to study Chemistry, more than from any other school in England.

There were so many personal triumphs celebrated today and it was wonderful to see the celebrations of those who have never found their studies easy but have come through today with great results and a coveted university place.

And, just as we laud those sportsmen and women or actors who perform particularly strongly, so we should highlight today the dozens of boys and girls who secured at least AAA:

This was one of those year groups that will not be easily forgotten. They were primarily a year group of entertainers: dancers, actors, jokers, singers, sportsmen and sportswomen. They liked to give the impression that they took their academic studies in their stride, cheerfully assuring us that everything was under control. We were not always convinced. But they did themselves and Brighton proud: a record number of A*s, record numbers to Oxford and Cambridge and, most importantly, huge numbers securing places at top universities. It was always a year group with a sunny disposition and it was lovely to see that reflected on so many faces in the quad this morning. I am delighted for them.

I should also add that the Lower Sixth AS results were also encouraging. They had no opportunity this year to re-sit any modules (unlike their peers over the last twelve years) yet they achieved our second best set of AS results ever, with just under 60% of grades at A.

I can now relax until next week when the GCSE results arrive.