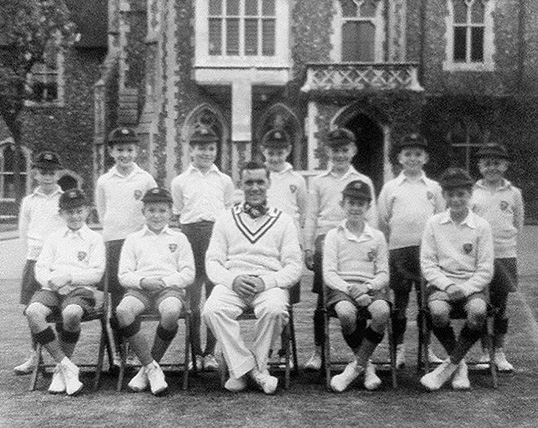 What are the chances!

We had a fabulous letter in this week from Kate Merrin (W/F. 1989-93) who found a photo of a BCJS team on a filmset in Australia. We would love to know the date of the photo, and also the story behind how it got there! Here's the letter for starters, if anyone recognises the photograph please contact the OB office!

"I moved to Australia 7yrs ago where I work as a film/tv producer. This week the strangest thing happened. I was out filming in a remote location in northern Victoria. Years ago they built the set for Man from Snowy River here. The owners of the land have kept it and once in a while it gets rented to film companies when we are looking for old town / 1850's sets or cowboy style sets.

It is a dilapidated old place that probably gets used once a year if that. Anyway we were filming all over the country and were using this set today for one set up. I arrived there this morning at 0600 and the only building that was still safe to go inside was the fake "town hall" - so I wandered in and amongst the rubbish and dust and some old tables I saw two framed photos lying on a table in the back. So I walked over and... they were both old pictures of cricket teams. One taken in 'the bush' somewhere in australia and the other... at Brighton College of a BCJS team back in the 50's probably!

I was gobsmacked!! What were the chances of me being 20,000 miles from Brighton in the middle of australia with a crew of 50 people from all over the world and I walk into an old unused film set am the only person to go over to these pictures and find one of them to be a picture of my old school! It completely blew me away!

So attached are a couple of pics of the film set (below: the photo was in the building where the lady and goat are outside) and the picture itself (above)! I would love to know when it was from and how an earth it made it to there! Bizarre! What a place to find it!"

"I think the photograph of the BCJS cricket team found in Australia dates either from 1953 or 1954.

I was in the junior school from September 1952 to the summer of 1956.I think it’s one of the junior teams because if I remember rightly, when I got into the first 1X in 1956 we wore whites. I am second from the right in the back row. Standing next to me on my left I think is somebody call Stanwick. On the other end of the back row is Johnny Lewis (he went on to be a terrific cricketer and was also Captain of rugby in the senior school). The master in charge is “Dickie Bird” Holder. Seated next to him on his right I believe is Reed, and on his left I think is Thorpe. On the far right in the front row is Charlie Proe. The others I’m afraid I don’t remember. Fascinating to go back all those years. What a find! I wonder which one of the team owned the photograph."