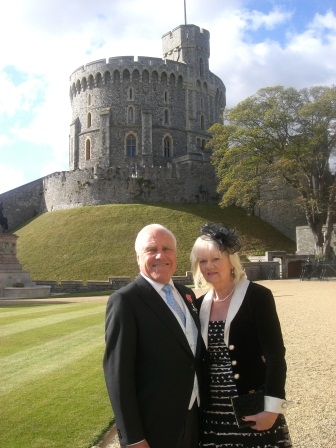 Abbeyfield began in London, 56 years ago, when Major Richard Carr-Gomme, was dismayed at the lack of decent accommodation for the lonely, and when he left the Army he used his discharge payment to purchase a property in Abbeyfield Road, Bermondsey, and in the years to come he assisted others to provide similar facilities in towns around the Country.

A few years later, he met up with the Vicar and the Town Clerk of Brighton, and the Brighton Society was the third to be formed. About 30 years ago, I was approached by Bill Blackshaw, the then Headmaster of the College, and Chairman of The Abbeyfield Brighton Society, to see if I would be willing to join the charity as a volunteer, to assist them with professional advice on the maintenance of six houses, they owned in Brighton and Hove, and when Bill retired as Headmaster, he also stood down as Chairman and asked me to take his place.

I was very fortunate to receive an MBE in the Queens Birthday Honours this year for services to the elderly, and in October spent a memorable time at Windsor Castle at the investiture by The Princess Royal. It was the first time that I had heard of the event happening there, but when I was invited, I was delighted with the location. It started when we were picked up in a limousine and driven to the Castle, up the Long Walk, to the entrance normally reserved for the Royal Family and visiting Heads of State. I was allowed three guests, who were my wife, sister-in-law and her husband. It was the latter two who were responsible for putting together the extremely detailed application, some 18 months ago, which I understand is the norm, and obtaining the many letters of support required from those who were involved in the Abbeyfield movement. My three guests were directed to the Waterloo Chamber, where the awards were to be given, whilst we went to another room, higher honours in one and the lower ones like mine in another.

After a period, three very senior Palace Officials entered and together explained to us what would happen and how we were to move when called. After being presented, we exited the room, before re-entering the Waterloo Chamber and sat at the rear and joined up with our guests at the end of proceedings. We were invited to look around the State Rooms, if we wished, which were as expected, full of famous works of art, before adjourning to the Castle Hotel for a very pleasant lunch.

The guiding principle behind the Abbeyfield Society is to provide the elderly with their own homes within the security and companionship of a house, and not an institution, which can become the focal point of goodwill and friendly contact within the community.

At the present time, the national Abbeyfield Society owns 22 residential care homes and 139 supported sheltered houses and there are over 600 independent, but affiliated societies like the Brighton one, which changed its name to the Abbeyfield Brighton and Hove Society, and currently runs four large houses providing very supported sheltered housing in the City. In these, each resident furnishes their room as they wish, but are provided with all of their food by a resident house manager and provided with a Carelink emergency call pendant, and they are relieved of the responsibility for maintenance, heating, lighting, paying bills etc, all for a single weekly payment. Whilst many Abbeyfield Societies do provide care, we, in Brighton and Hove, do not, but it can of course be bought in from Social Services.

There are also Abbeyfields in very many countries in the world from Japan in the East to Canada in the West.

It has become harder to find volunteers these days in some way due to the legal requirements that Trustees have to comply with and the calls upon people’s time, and with this in mind, the individual societies in East Sussex of Eastbourne, Heathfield and Brighton and Hove will join together as Abbeyfield South Downs.

Recently, I was delighted to be approached by Rebecca Findlay from the Old Brightonians office and Head of Community Service,  Jack Cornwall, to see if pupils from the College’s Community Service Group could assist us on a voluntary basis and we have all been delighted by the gardening and the afternoon sessions they have with our residents, just talking or playing games, and I recommend to everyone, who is in a similar position to me, to contact Rebecca or Jack to discuss how the group can help, as it is so good for the pupils to talk to a totally different generation and to learn how to put something back into the community.