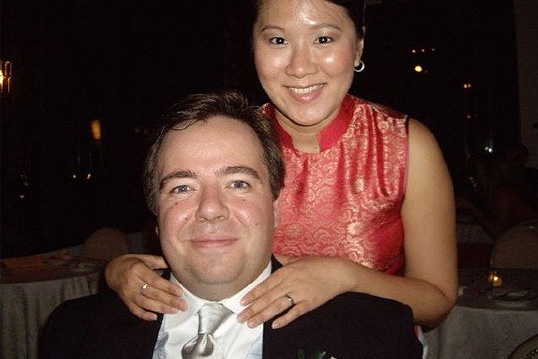 We recently caught up with Mat after a floury of activity on the Old Brightonians LinkedIn Group. We asked what he had been up to since leaving the College, and here it is...

"Much time has been spent enjoying life since I left the college in 1989, here's what I remember of the last 22 years.

As friends of mine will recall, I was a bit keen on computer games while at the College. Instead of going to university, I spent my time at a writing games at a company I had started with Simon Waterfall (R. 1984-89). After a few years of that I was lucky enough to blag a job in the City that led to an employer-paid round the world trip for the next 8 years. Some work and many expense claims were involved with my partners in crime too often including Angus Wathen (D. 1984-89) and Dave "Shep" Sheppard (D. 1984-89).

In 2001 I was lucky enough to be placed on garden leave after we sold the company I was working at, and was forced to spend 6 months wandering the planet being paid to go fishing. The best laid plans of mice and men (I think Mr Robinson made us read that once) went awry and on day 2 of my odyssey I met my future wife, Grace, at a rodeo in St Paul, Oregon. This ruined the fishing but led to marriage in 2003 and three children Callum (2008), Fraser (2009) and Freya (2011).

I moved to the US in 2003 and settled in Portland, OR about two years ago after stints in Menlo Park, CA & Kansas City, MO. Nowadays I'm CEO of a startup called Cloudability: if your company uses any cloud services you should check us out (sorry for the pitch).

I'm still in touch with various OBs including Mark Howard-Hardwood (C. 1985-1990) and Basia Howard-Harwood (née Jasinski) (F. 1985-1990). Through a weird coincidence both of their sisters ended up living round the corner from me when I was in California.

I don't make it back to the UK much nowadays (flying with 3 small children is illegal I think, or at least it ought to be) but any OBs who find themselves in the North West Pacific area should certainly make a detour to Portland and expect a tour of the best wineries, breweries, restaurants and donut shops plus some reminiscing."