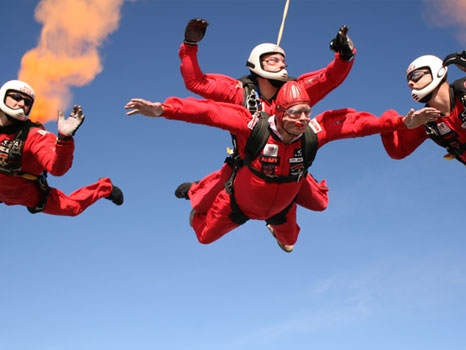 For reasons best known to himself David has chosen to show his support for wounded servicemen (and raise a considerable amount of cash) by leaping out of a perfectly serviceable aircraft.

Help for Heroes are better off to the tune of some £16,700 as a result of this act of lunacy, and our Association remains extremely relieved to hear that David landed safely back on Earth...

David writes:
"The parachute jump finally took place on the 9th October 2008 having been transferred from the original date because the RAF wanted the air space. I never knew that I was that large! The total raised by all of you as I write this, stands at around £16, 700 which is a fantastic achievement. But, we don’t want to give them that, (as the expression goes) we want to give them more."