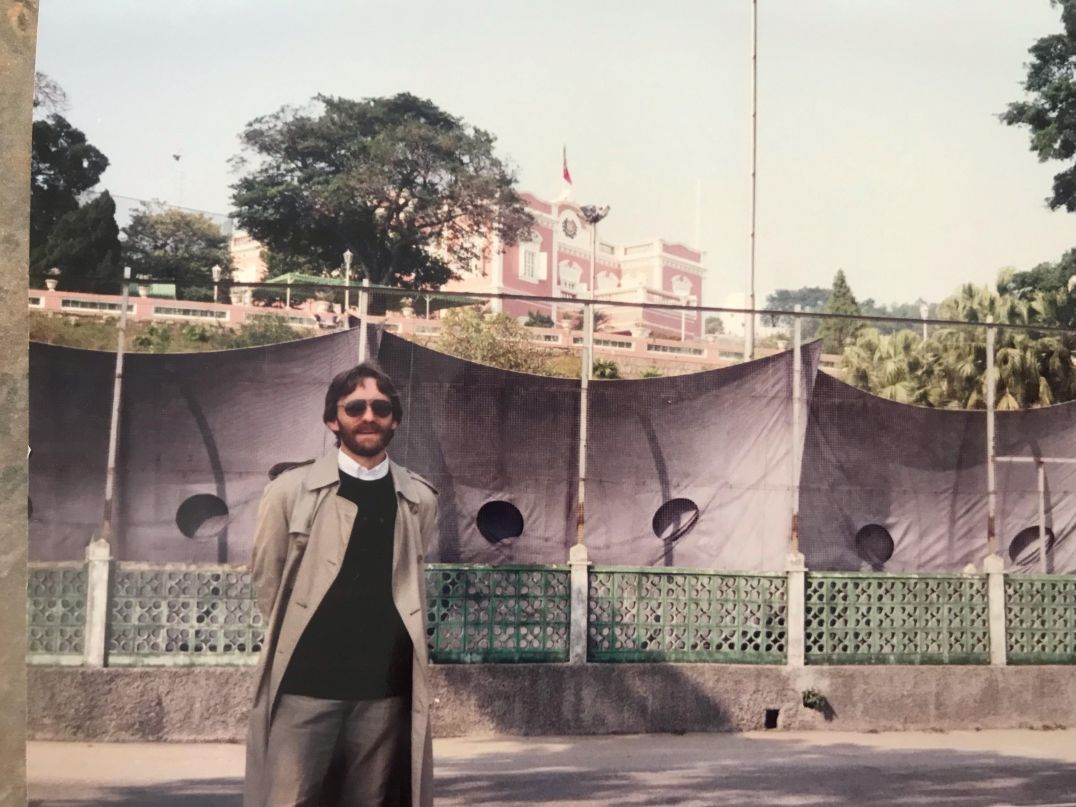 Brighton College through and through

My grandmother was, to me, Gar, but to others, she was the Peggy Williams, and my ‘aunt’ was Dorothy Fenwick. Not a blood aunt, but such a close friend of our family. Dot was brilliant, the life and soul of the party. My parents married at the College, as my grandfather was Chaplain and House Master of Wilson’s House. My mother went on to be mayor of Brighton and the head of highways and transport for years. My godmother was at Bletchley Park and was another very interesting woman. I come from a long line of inspirational women!

My father was insistent that we went to Brighton, and I was at the school right the way through from the junior school. I enjoyed my time at school. I keep in touch with one or two friends from my time there, and I am also still in touch with people who went to Lancing and Roedean and other local schools. That we lived so close to the school was great – I could get out of bed as the chapel bell rang! I was self-willed at school – although never got caught!

The facilities, even at the time I was there, were pretty good. I was keen on swimming and tennis but wasn’t particularly sporty otherwise. We were spoilt having tennis courts on our doorstep, and we’d often play when school was closed with the children of some of the teachers.

I always enjoyed the academics: I started French from about the age of 8 and focused on languages quite early. Although I was always top in maths, English was not my strong suit. For A-Level, along with languages, I studied Economics, but I was too “questioning” and didn’t do too well!

The College showed me that the world was bigger than ‘just’ Brighton. One of the other things I enjoyed at school was voluntary service, and it is clear that it is still a priority, which is great to see. It stays with you. Now I volunteer with the Red Cross, in disaster management, and Meals on Wheels, which has been difficult during the pandemic.

The importance of travel

My father was very encouraging of travel and always emphasised how much it broadened the mind. As children, we saw lots of the world!

I’d always wanted to go into hospitality: I studied Hotel Management at university, then went to Cornell for a year (where I did Japanese to add to my languages). I ended up in London, working for Grand Met. Hotels. At the time, Grand Met. Hotels had bought up reservations company ‘Utell International’, and I was sent to open their offices in Milan when I was about 24 before I was moved to Dusseldorf. I was head-hunted by Hyatt and was responsible for setting up their European offices. After a couple of years, I was asked by a friend to start a hotel in Australia… My father would be proud, as we’ve so far travelled to 135 countries. Iran is probably the best place I’ve ever been. We went on our own and the Iranians couldn’t have been kinder, and the history is fascinating. Vietnam is another favourite.

My whole family is now abroad. My sister moved to New Zealand after me, and my twin brother lives in Australia and so apart from the odd cousin, we’ve not got any family in the UK anymore. I haven’t got any biological children, but we adopted two children: from Vietnam and from India. My first boy ended up marrying his childhood sweetheart after a chance encounter in London, and they now have a young family.

My friend and I headed to Australia in 1983 We did a huge road trip across the country, battling the worst of the weather and all sorts of setbacks, and looked at buying a place in Western Australia. However, circumstances were against us, and we went to New Zealand instead. We discovered there was a huge plot of land for sale in the Southern Alps, midway between Nelson and Christchurch, which is where we have built our luxury lodge. We started work in 1987 and owned it for about 15 years. I set up the Luxury Lodge Association of New Zealand and latterly became a travel writer.

Our lodge has seen some amazing guests. For instance, we hosted CHGOM: guests included the President of Nambia, Sam Nujoma. He was a fascinating man and was running a country that had been at civil war for so many years. Speaking and learning from him was quite something.

But I’ve also had OBs to stay… We once had a group of QCs come to stay, and one of them was Bob Alexander (Ch. 1950-55). We took the group white-water rafting one afternoon, and as we were drifting along the river between rapids we discovered this close connection, but it transpired he had been in Wilson’s House – with my grandfather as his housemaster! (I never knew my grandfather, but Bob did and it was amazing to hear about him in the depths of a South Island mountain range!) I was so surprised to have an OB in my raft that I went completely off course, hit a boulder, and Bob fell out the back! Luckily, he was fine…!

If I have a message for any current pupil at the College, it is to give back … in whatever way you can, to your family, your community, your environment. Doing voluntary work has given me so much more meaning in my life - succeeding today is certainly not ‘all about money’!