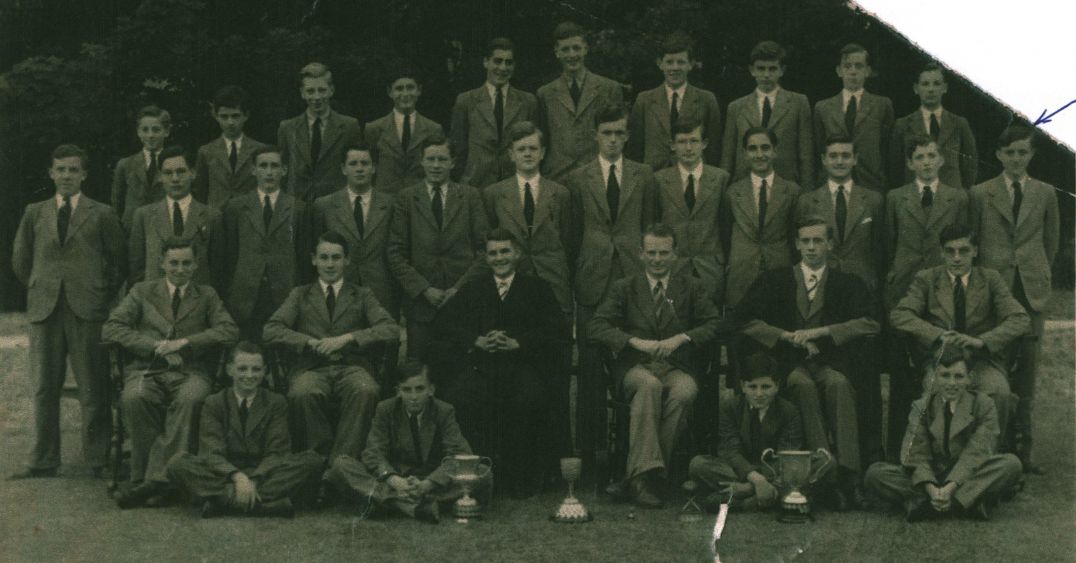 The Old Brightonians is a community of alumni that spans generations. Dennis Patrick Flynn (Ha. 1942-45) was a pupil at the College during the Second World War and is now 95. He retired to France in the late 1980s with his wife, Jean, and spoke to us about the challenges of being a pupil at Brighton in the 40s, and his career as an aircraft engineer.

When you were at Brighton College, what did you want to be when you grew up?

Something to do with planes. This was encouraged by my father, who took me at the age of 9 or 10 to Eastleigh Airport to see the Flying Circus of Alan Cobham. Here I had my first flight on an airspeed ferry. My love of planes was also encouraged by yearly visits to the Navy Day at Gosport and the RAF tattoos, as well as visits to HMS Hood.

I collected Wonders of the World’s Aircraft as a child, too (and still possess a few copies!). This interest was further peaked by seeing three German Fighter Bombers which flew over my head whilst at the school, which was quite something.

Tell us about yourself, now you have ‘grown-up’.

When one is in their 95th-year one assumes they have finished growing up, however, I have realised that you actually never stop learning! I retired at the age of 60 and within 5 years my wife and I decided to move to France, into a 2-up 2-down holiday house. One day, our neighbour told us the owner of a 500-year-old house in the village had died and his son wanted to offer it to us… And so the great adventure began! We embarked on the challenge of renovating this ancient house, with no water, sanitation, or electricity! Luckily we found a wonderful lady, Madame Barrou, who did a wonderful job bringing my ideas for the house to fruition over 6 months.

What about your life now would most surprise your College teachers?

I would be surprised if any of them would have given me a second thought. I had double pneumonia at the start of World War Two and lost a lot of schooling. I found it nearly impossible to catch up. During my time at Brighton, I also had a severe accident, falling from the platform of a moving bus and smashing my right elbow, losing two bones and 2% extension in my arm… But I soldiered on, and soaked up some of the good parts as a pupil!

I met some life-long friends at the school, both sadly now deceased, John Carden (Al. 1942-46) and Don Mellor (Ha. 1940-46), who shared some of my motorcycling travel across Europe: to France, Germany, Switzerland, and Austria. Many of these journeys were made on mountain tracks on unmade roads with some dangerous hairpin bends! They made for some hairy moments at times!

I was badly bullied at school, however, and the regime was harsh, so favourite memories whilst I was at the school are hard to come by. Yet something in its harshness has helped me overcome the trials and tribulations of life and I am thankful to it.

What advice would you give your school-age self?

Hold on with your fingertips! Something good will come along. In my case, I did gain some element of ‘fame’ and was called upon as an expert in many situations as I progressed through my career.

What did you do as a career, and what did your work involve?

I studied Aircraft Engineering at College in London, where I mingled with Czech and Polish students. Being in class with them taught me a high respect for displaced people.

While living in Southampton, I continued my studies at Air Service Training at Hamble Aerodrome, then in 1948 finally obtained an aircraft license. This meant I could sign off small aircraft for flight, which included monitoring the state of the engine. I applied for many jobs but was competing with ex-RAF personnel, but eventually found work as an inspector at Bristol Engines Experimental Department. It was a brilliant part of my life but after 5 years there I applied for a job with Normalair Ltd. in Yeovil and worked in the Development High Altitude Lab. I ended up staying with Normalair for 30 years, working in a number of different departments, on work including checking hydraulics and turbines; visiting RAF stations and army bases; checking on failed equipment. I took early retirement in 1988 at the age of 60 as the company was making an awful lot of people redundant and it was an increasing negative place to work.

What were the most challenging parts of your job, and what are you most proud of?

Almost everything was a new challenge by nature! But work on the VC 10 and my involvement in the development of the Refrigerant Gas Seal stands out in my mind.

What are the three items you would take to a desert island?

My trusty AJS motorcycle, an endless supply of petrol and a good book, like ‘The Wonders of the World of Aircraft’.

As someone who could be relied upon at work and remembered past problems, and how to solve them. As someone searching for new knowledge and always being there to help anyone in need.