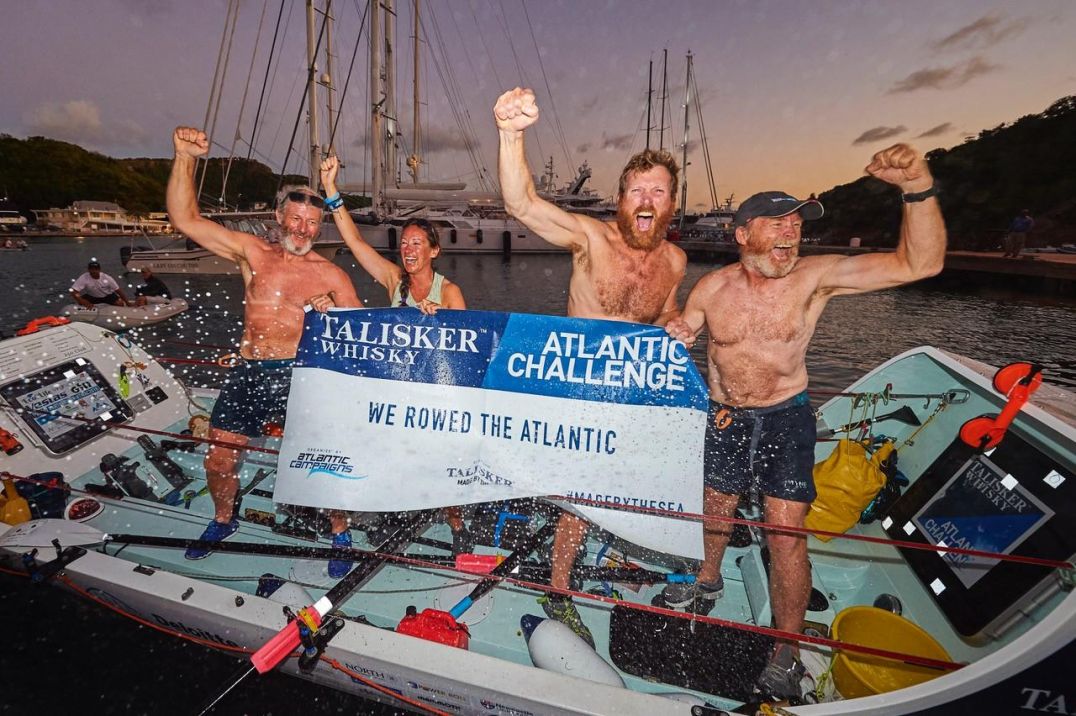 Following in the footsteps of past explorers like Captain James Cook, Sir John Franklin and John Rae, Phil Kite (Br. 1974-79) is using gin to help fund his row of the Arctic’s 3,700 km Northwest Passage.

After a successful career in business, in 2019 Phil led a team that rowed 4,800km across the Atlantic Ocean raising £43,350 for charity and achieving a Guinness World record for a mixed four of 42 days 10 hours in the process.

Now, Phil is part of a new team aiming to be the first to row the arctics infamous Northwest Passage!

The Northwest Passage is the 3,700 km arctic route that links the Atlantic and the Pacific oceans. The most infamous expedition was that of Sir John Franklin when he led two British naval ships to the arctic to carry out research on the nature and movement of the earth’s magnetic field and find the Northwest Passage. Sadly, both ships were lost, and a fictionalised account of the expedition called The Terror was recently shown on the BBC, staring Jared Harris.

In Ocean rowing, navigating the Northwest Passage is considered the "Last Great First", as it has never been completed. Until recently traversing the passage wasn’t possible in a single season, but climate change has resulted in the sea ice retreating for longer periods each year, keeping the route open from July to September, which is the time of year when the expedition plans to embark on this incredible challenge.

Climate change is now rightly at the forefront of our minds and whilst rowing the arctic route Phil and the team plan to draw attention to the drastically changing environment by carrying out vital research for Big Blue Ocean Cleanup and New York University.

Big Blue Ocean Cleanup is one of the world’s leading non-profit marine conservation organisations, with a mission to end ocean pollution. They help keep the oceans clean, protect vulnerable marine wildlife, provide free educational resources, research ocean pollution for policy change, and support the development of innovative technologies. New York University climate scientists are looking for more information on water quality, temperature and wildlife, and a row of the passage, due to its slow pace and minimal environmental impact is the perfect vehicle for such data collection.

The Expedition's crew of sixteen will row in two ice-class expedition ocean rowing boats designed for such a challenge. Aged 28 to 65, the diverse crew come from all walks of life including GPs, paramedics, and a couple of retired members who should know better - of which Phil is one.

The unsupported trip is likely to take three months and among the many dangers will be polar bears, rocks, ice and fierce storms, causing wind speeds of up to 70mph and waves of 60ft. Despite the expedition taking place in the Arctic summer, air temperatures will dip as low as -10C and the duration of human survival in the water will be less than 20 minutes.

Phil told us why he wanted to take part:

I like the physical challenge: you are never too old to test yourself. Ocean rowing means rowing 2 hours on, 2 hours off, 24 /7, and that tests you mentally and physically like nothing else. The Arctic will be the ultimate test!

I want to visit the Arctic and see what change is taking place. The world's climate is changing the Arctic at a rapid rate and I want to see for myself what is really happening. The row will have a minimal environmental impact, and traversing at the speed of 3 knots we will be able to see and hear the Artic Ocean and its amazing wildlife in its raw state. It is a once in a lifetime opportunity.

To help fund the expedition, working with a Scottish craft distillery, Phil and the team have created Northwest Passage Expedition Gin: the spirit of adventure! Distilled in Orkney, which is the last port of call for many explorers making the hazardous journey to the Arctic and Northern Canada, the gin is flavoured with botanicals from the shores of Orkney and Canada’s Hudson Bay. Water used comes from the same well that Captain James Cook and Sir John Franklin used to resupply their ships before their expeditions to the arctic. The gin recently won a Gold Gin Masters award from the Spirit Business and sales will help support the Big Blue Ocean Cleanup.

You can follow the expedition on Facebook: nwpexpedition andThis email address is being protected from spambots. You need JavaScript enabled to view it.is happy to be contacted about all things Expedition and gin.