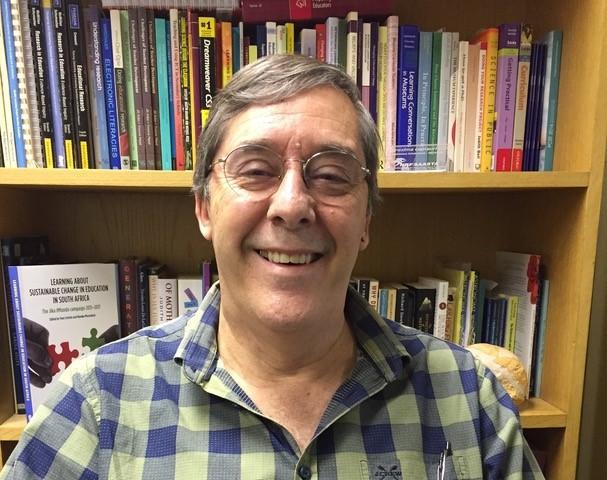 Dr. Tony Lelliot (Du. 1970-75) lives in South Africa, after moving to Africa in 1985. As one of the first boys in Durnford, Tony remembers the teachers who supported his interests and talents and his love of science. Having had a successful career in teaching, Tony now works for an NGO: Saide, an education charity working across sub-Saharan Africa.

Why did you go to Brighton College?

My parents considered that going to a private school would give us a better education. My father ran a local building contractor business WH Lelliott and Son – the “Son” being my grandfather – which was in Kemp Town and so it made sense for us to go to school nearby where he worked. He would have to be in for work at 8, and so we got to school by 8 too, although lessons didn’t start ‘til 9…

And you started off in the Junior School?

My elder brother was five years ahead of me so we never overlapped. We both started out in the Junior School when it was just across Eastern Road. I enjoyed most of my time at the Junior School and had a mixed bag of teachers. Some of them really encouraged my interests: particularly “Bundy” Burstow, who clearly believed that small boys should have an interest and was very enthusiastic and supportive of my love of bird watching. Even more so was S. Bayliss Smith, the headmaster, who took a few of us out birdwatching from time to time.

I moved up into the Senior School in 1970 and into a brand-new (as a day) house, Durnford, which was accommodated in a house in Clarendon Place, since demolished like the junior school I think. I enjoyed my time at school – my brother before me, much less so – as I had a great group of friends and liked most of my lessons. It was the choir where I found a lot of enjoyment. I was in both the Chapel Choir and the choral society, and through it, made friends with other boys across the houses and years. I hated rugby and cricket (especially rugby!) and was overjoyed when Mr. Blackshaw decided that we could choose other sports. I took up cross-country, squash, golf, and shooting, and had a much better time during games after that. We went shooting in Steyning and Kithurst rifle ranges in West Sussex, but they closed around 1973. We did .22 shooting in the basement of the Great Hall before they disbanded it altogether, in favour of sea-kayaking… I didn’t fancy that! I was a keen biologist, although ended up in set 3 for all the subjects when I first entered the Senior school. The joke was on them though, when I came top of the entire year for biology in the Lower Fifth and was bumped up to set one. A very impressive teacher was Mr. Withers, who took me for biology in the 6th form.

I did, unfortunately, have to put up with the tail-end of ‘fagging’, and so school – at the beginning wasn’t always easy, or enjoyable – but, overall, I had a good time. It started to become a different school under Bill Blackshaw, and I was there at the time they introduced girls, as well as starting to change the way the pupils treated one another. I became joint Head of House for Durnford, was a school prefect, and did well in my A-Levels, and went to Durham University.

At Durham, I started off studying Geology and Botany joint honours, but found I like Geology much more, and graduated with a BSc. Honours. After graduating, some friends and I decided to go to Nepal to continue the “Durham University Himalayan Expedition, but I was the only one to secure funding, from the World Pheasant Association. I arrived in Kathmandu on my 22nd birthday in 1979, was there for 8 months, and went again for the next three years, to do research on Nepalese pheasants. In the ’80s, you were able to submit a thesis to Durham University as a Master’s, and so finished my research there with gaining a Master’s. I decided to go into teaching and completed a certificate in education at Garnett College, in Roehampton, to do Further Education teaching. I then taught at Palmers College in Essex for three years at a Sixth Form College.

I was really interested in living and working overseas, and ended up with job offers in Zimbabwe and Botswana, ending up in the latter. That was in 1985, and I’ve lived in Africa ever since. I taught in a school and the Molepolole College of Education in Botswana for ten years, and my wife is a Motswana, so it’s a special place to me. But when South Africa started to open up again in the ’90s, I took a job at Wits University, and stayed there for 16 years, teaching there until 2016. I had a number of management roles, taught science teachers, and managed to find the time to do a PhD too, in Astronomy Education, graduating in 2007.

Since leaving teaching, I’ve been working with an NGO in South Africa called Saide, which aims to transform education and training through improved access to knowledge, skills, and learning across Africa. I’m also very involved in Saide’s African Storybook initiative: providing digital storybooks in local languages to children where books are scarce.

Do you still keep in touch with your school friends?

Yes, a few. Some of us meet up whenever I visit the UK – which has obviously not happened for a while! Considering I moved abroad such a long time ago now, I’m pretty pleased with how we have managed to stay in touch.

When I said to one friend that I was going to speak about my time at school he said, ‘don’t forget to mention the beatings’… I’m pleased to hear it’s changed markedly for the better since our time.

Would you like to share your Brighton College story and what happened next? Get in touch with the Old Brightonians office!