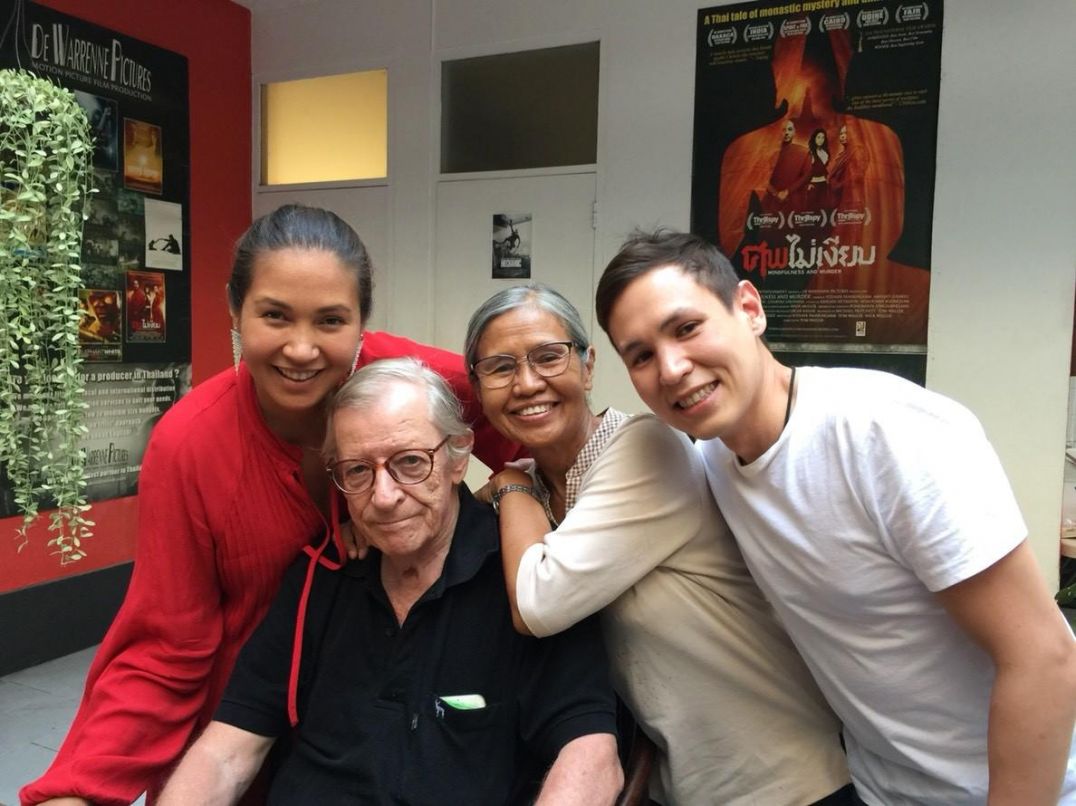 Martin Grose (Br. 1958-63) is a retired lecturer, who visited Thailand, aged 29, and never left. He shares his fascinating life story - from brass rubbing in Sussex villages to missing out on a place at Clare College, Cambridge to directing comedies in a Bangkok university.

My father didn’t get much of an education because his father whipped him out of school at the age of 16 to help run the family business. However,my father’s younger brother, my uncle Leslie (Sc.1933-38) was sent to Brighton College. Presumably, that is why my two older brothers Guy (Br.1949-54) and Stephen (Br.1954-60) also went there. When it was my turn, I was simply following a path already pre-determined for me and Leslie’s two boys, Gary (Sc. 1959-64) and Robin (Sc.1964-67), who completed a run of six Groses a year or two later.

I was a boarder in the Junior School, starting in 1953. In 1958 I moved over the road to the Senior School and into Bristol House. As the result of a serious illness when I was four years old, I had a growth problem and was very small for my age. Indeed, I was sometimes referred to (usually good-naturedly) as ‘Stunted Growth’! Several of my school-team photos are really quite funny, showing a line of big fellows standing in the back row and, on the end, this little chap peering over the head of the boy sitting in the front row! In that first year, however, my brother Steve was Head of School and he kept an eye on me. When I was about 15 my problem was diagnosed and with treatment, I began to catch up. Funnily enough, when I first arrived in Thailand, I found that I could stand at the back of a crowded bus and look straight down the aisle over the heads of the other standing passengers and out of the front wind-screen! I had never felt so tall. Thais are much taller these days.

My time at Brighton College

My favourite memories of school are mainly involved in sport.

I was in the squash team and the First XI for cricket and enjoyed both immensely. The fact that the squash master sometimes found a pub for a ‘quickie’ on the way back from an away match probably added to the pleasure. Apart from sports, I had a reasonably good singing voice and was in the choir and choral society. In fact, I recently came across a programme for a performance in a church in Brighton by the combined choral societies of Brighton and St Mary’s Girl’s College. I remember singing, “I Got Plenty O’ Nothin’” too loudly in the house music competition and also playing a hilarious version of “Little Brown Jug” in a quartet of clarinets following the maxim of one note per clarinet at a time! For both these questionable achievements, I can thank my friend Ralph Abraham (Br. 1959-63).

There is one other thing, somewhat unusual, that I remember fondly. Towards the very end of my time at Brighton, I had a short-lived passion for brass-rubbing. In brief, you got a few sticks of cobbler’s wax and a special kind of paper and, if you were me, you headed out on a Sunday afternoon to the medieval churches around Sussex. Several of them had a tomb or two of some notable with an effigy on top. Spread the paper over the top, rub it carefully with the wax and you end up with an impressive picture. The local vicars and villagers were usually very happy that you were taking an interest in their history. I enjoyed getting away from the school grounds for a bit and, looking back, I think it was a reflection of a growing awareness that it was time for me to leave.

Both my brothers had gone to Clare College, Cambridge and when I did my A-levels I was hoping to follow them. In the event, I got two very average grades in English and French and failed History. Understandably Clare were not very interested in me, but they said they would re-consider if I tried again the following year. So back I went to Brighton until, just before the spring term and already past my nineteenth birthday, I belatedly realised I was wasting everybody’s time and money and left.

First off, I signed on as an articled clerk with a firm of Chartered Accountants in the City. For the next three years, I went all over the UK on audits, loving travelling and seeing new places, but bored to tears with the job itself. So I quit and decided I wanted to go to university. For a year I studied at the Barnet College of Further Education, then re-sat my A-levels and achieved exactly the same results I had got at Brighton! It was at that point that I got the major break in my life. A friend engineered a contact for me at the School of Oriental and African Studies (SOAS). I went for an interview and sailed into a BA programme in South-East Asian Studies, basically because they were desperate for students! Up to that point, I barely knew where Thailand was.

It was a four-year course of both a language and a discipline. I was hoping to study Burmese and History but ended up with Thai and Social Anthropology. The languages were rotated and that year was the turn of Thai, take it or leave it. As for Anthropology, it was the only department with a vacancy. It turned out that I lucked out. There were only five of us studying Thai in my year, but even that number, I believe, was the largest intake for one year they had had. I enjoyed the challenges of Thai mainly because we had two inspirational teachers. It’s a tonal language and quite a lot of time in the early days was spent in a language lab listening to and repeating words with different tones. My efforts kept coming back ‘wrong, wrong, wrong’. When I finally got it right, I had no idea what I had done differently, but clearly, my ear had been fine-tuned.

SOAS was a real eye-opener and I loved it. It was inevitably cosmopolitan and home-grown students were very much a minority. I particularly liked the fact that there was little or no academic elitism. Of an evening, you could drop into The Duke of Marlborough pub round the corner – a kind of ‘SOAS annex’ – and you could have a beer with groups of post-grads, lecturers, and professors. No matter how fresh-faced or naïve you were, you would almost always be welcomed into conversations and discussions and if you ventured a contribution, you might be gently corrected, but no one would put you down. I found almost everything about SOAS a very healthy educational environment.

When I finished my BA, I was accepted to do a Ph.D. in Thai Literature and I flew to Bangkok in the autumn of 1974 to do research. I was 29. Very quickly I was aware of a new world of different possibilities. I was completely on my own and in a position to determine my own future and after a few months, I put the Ph.D. on hold (never to return, as it turned out) and got a job teaching English in Bangkok at Srinakharinwirot University (SWU). I stayed for thirty-six years, retiring in 2011. I had no formal qualifications for being a university language instructor, but the students’ level of English was pretty poor. I sought advice from other western university teachers and did a lot of reading and research on English and European literature, which I was also required to teach. I can honestly say I loved it from the word go. Most of the students were bright and greatly appreciated having a native speaker to teach them and, in that first year, I was the only one under contract.

Nevertheless, the thing that really made my time there special was being asked to help with an English language drama production. It developed into a career-long project in which I produced and directed (sometimes with others) an annual play – usually, 8 full-length performances spread over two weeks. We only did comedies and for the most part, I adapted standard classics (Wilde, Coward, Moliere, Feydeau, etc.), but I also wrote one play myself and co-wrote another with a colleague. I think it fair to say that I owe my love of literature and drama to Brighton and especially that paramount inspiration Geoff Lees. Finally, I must say it’s probably a little more than coincidence that my wife, Sayan, was the leading lady in my very first production.

For a year or two after retirement, I did some part-time teaching and began writing a book, a humourous account of my wedding in an up-country village in Thailand. It’s now finished but unpublished. In 2014, however, I suffered a ruptured abdominal aortic aneurysm and was lucky enough to be operated on by a team of young Thai doctors at Chulalongkorn University Hospital who pulled me through. I think I have joined a group of only 10% who have survived such a case.

My wife and I still live in Bangkok. Our daughter, Katy, who used to be an actress, singer, and TV presenter, now lives in Tipperary with her Thai-Irish movie-producer partner and our two granddaughters. A year or two back, her partner made the film “The Cave” about a group of Thai boys trapped in a flooded cave in northern Thailand. Our son Ken, and his wife, live in Wokingham and work at the Thai Square restaurant in Windsor. Up to a point, life is now slower and quieter, but over the last two years, we have done a lot of babysitting for the son of one of my wife’s nephews. He will be three next week and is a super not-so-little chap who keeps us on our toes. Recommended for retirees looking for something to occupy their time.

From the above brief review, it is easy to see that I have been blessed with more than my fair share of good fortune. At the same time, I have become acutely aware that one’s early life is essentially pre-ordained by one’s family and background. The crucial moment is when you realize that you can make decisions for yourself. You’ve got to have options, of course, and you have to be responsible for whatever happens.

I would never say my life in Thailand has been perfect, but it’s been pretty darned good and I take a modest pride that it has been consequent on my being able to run the show myself.