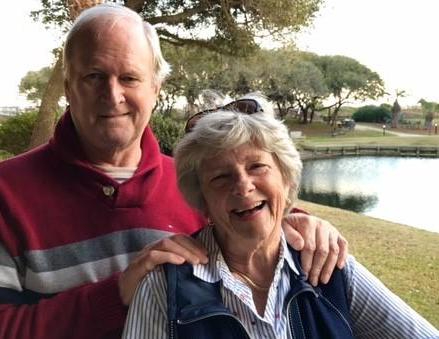 Following in his father, Sibrandt's (Go. 1926-31), footsteps, Michael came to the College from Jamaica in 1957. He moved to Canada after finishing his O-Levels at the College and has lived there ever since.

Michael, why don’t you start at the very beginning…

Yes, let’s go way back. My grandparents were Danish, and my grandfather was a sea captain, and sailed the Atlantic in the late 1800s before joining a banana company in Boston and then settling in Jamaica. My father was born there but sent back to Denmark for school but then – and I am not sure why – he was sent to Brighton College and was there from 1927 – 31. He moved back to Jamaica, where I born.

What do you remember about starting at Brighton College?

I started off at boarding school in Jamaica at 11, up in the mountains but it was decided I wasn’t getting much of an education… and so I was sent to England instead! I arrived in Southampton by boat in 1956 with my parents and met the Head Master Bill Stewart, but with my average mark of 21%, we were told Brighton College wouldn’t accept me. Needless to say, my parents, who’d taken a boat all the way to England to put me into school, were not too thrilled! Stewart told them the option was to send me to a ‘crammer’, so off I went to Bognor Regis, for 6 months and was then accepted to Brighton in 1957, aged 14.

Whilst I loved my time in England in the end, what is burnt in my brain is the day my parents drove away and left me at the crammer in Bognor. I think I cried for days. What was hard was that that they weren’t just going up to London but 3000 miles away and I knew it was going to be months and months before I saw them again. It didn’t hurt me though, being sent away to school and I gained independence at a very early age. You must sink or swim when your parents are thousands of miles away by boat…

Tell me about your school days.

I thoroughly enjoyed it: I loved the school, in fact! I’m still great friends with Ian White (Ch. 1956-62) from my time at school.

Boarding was fun. Once you got over the ‘fagging’…! I was very involved in school – very involved in athletics and was captain of the team. I also loved being in the water and was captain of water polo and swimming: The swimming pool was next to the great hall and where we did all our swimming. The sport was a huge part of my school life and of my memories, along with being in the RAF corps. During the Easter break, we went to camps with the RAF, and we would fly around in ‘Chipmunks’, which was great fun.

Were you allowed out much during term time?

Well, there were no school trips. My sphere of activity was Brighton, Brighton and Brighton!

You were allowed out every weekend and we could go downtown Brighton. In my first year, I wasn’t allowed out very much because if you had two detentions you weren’t allowed out… but you could have your detentions ‘caned off’… which was worth the sacrifice some weeks. We grew up a little tougher and differently overseas in the colonies.

Were you able to keep in touch with home?

I could call home once a month: which cost £4 per minute! I could send a ten-word telegram every fortnight which was another £2. I went home for the summer and had a guardian a family who looked after me over Christmas and Easter: they lived in High Barnett. I took the train up and would spend time with them.

It was all boats in those days; Five and a half days to England and my first aeroplane ride took 24 hours. We had to fly from London to Shannon, then to Iceland, Newfoundland, Bermuda and finally, Montego Bay. In those days the plane was a quarter full of people like me heading home for the holidays. If we were lucky there were boys AND girls on the plane! I remember the stewardess walking up and down with a flashlight to check we were all behaving!

You must have been quite unusual, being a pupil from Jamaica?

Yes! I was the only one I can remember who came from ‘the colonies’. The transition was pretty easy going from Jamaica to England, surprisingly. Although I never got used to the weather! Of course, I arrived in England with a very broad Jamaican accent and got teased all the time. I was 13 and free game. The senior boys loved it… I didn’t feel different though. I knew all about boarding of course, from my time in the Jamaican mountains!

Whilst in England I knew I wouldn’t be going back to Jamaica: I couldn’t see a future for myself there, even at a young age. I was planning on staying in the UK for A-Levels and university until went home after finishing my O-Levels.

What happened once you had done your O-Levels?

After a ‘rocky’ start, I ended up doing pretty well! I ended up with 8 O-Levels.

Then, during the Christmas of 1960 I went back to Jamaica and met up with all my friends who’d been sent away to school in England and one of my friends, Hugh, who I’d been friends with since the age of 2, was off to McGill University in Canada and I thought I quite fancied that – so I wrote to them and was accepted to study Commerce.

So, on the 18th of September 1961, I arrived in Montreal. However, after living through a strict boarding school regime in England, I rather ‘over enjoyed’ myself in Canada and had to repeat a year of McGill!

I really enjoyed the piece Harry North (He. 2014-19) wrote - he has got Montreal nailed! There was a time when a lot of the population there didn’t speak English, which made it interesting but it’s a truly lovely city.

What did you do once you graduated from McGill?

I started working at IBM and worked there for 12 years but have had a pretty varied career, including running a few companies. I finished my career working in consulting, in Human Resources, helping executives who had been let go. I’m happily retired now, and I was in my early 70s when I stopped working.

Over the years I was transferred back and forth between Montreal and Toronto, but we moved to where I am now in the 80s. My father-in-law owned a lot of land on Lake Simcoe, and I built my house here myself and I love it. We have a condo in Toronto, but it’s too busy in Toronto for me now – it’s not fun anymore.

Have you been back to Brighton since you left?

Yes, I went back to Brighton once – probably in the mid-1980s. None of the new buildings were up and it was still the school I remembered. The newest building was the science block! I know it’s changed a lot since then and I can’t believe you’ve turned my house into a girl’s dormitory!

I’ve really enjoyed staying in touch with the school through the Old Brightonians and enjoy reading the Pelican and the newsletters. I must say though, I do skim over anything about the arts and theatre!