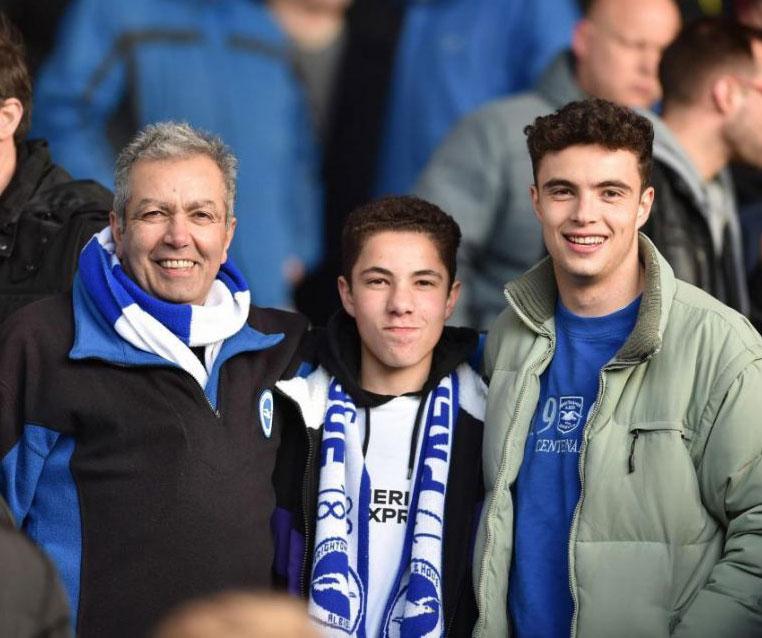 To celebrate Father's Day we spoke to a father and son who have both passed through Brighton College. Paul (Le. 1972-77) is a Chartered Accountant and Seb (Le. 2009-16) graduated from the University of Birmingham last year.

Tell us about yourselves.

Paul: I’m a Partner in Moore Kingston Smith LLP, a firm of chartered accountants & business advisors in London & the South East. I trained with them after a year off post-university. We live in Henfield and Belinda & I have two sons, Sebastian & Toby. Toby is in the UVth, Leconfield of course!

Seb: I’m a Graduate Consultant for InCrowd Sports. I’ve been with them since December and have enjoyed my first six months with the company. I had planned on going travelling after graduating from the University of Birmingham however Covid derailed those plans and I’m now settled living in Battersea with 4 university friends.

Paul, why did you choose to send Seb to Brighton College?

Seb was entering his last two years at our local village Primary School, which takes children through to year 6, age 11. We looked at Steyning Grammar School, but around this time the College was launching the new Lower School – catering for Year 7 children. My best man and fellow OB, Russell Shaw had children at the College at the time and showed us the hot-off-the-press Lower School prospectus. The timing was perfect and the Open Morning where we toured the school was absolutely brilliant. Sebastian was shown round by one of the leading College sports pupils – sport being one of Sebastian’s passions. The teachers were fantastically enthusiastic and my wife was completely won over by Richard Cairns’ passionate speech to parents. To be at the very beginning of the Lower School in 2009 was something very special. Leah Hamblett, Anthony Merritt (later to become Sebastian’s housemaster) really made the Lower School come into its own.

Were you in the same House and how do you think your time at Brighton was different?

Paul: Yes we were both in Leconfield – wouldn’t have had it any other way! Our times at the College were so different. For starters, we were always addressed by our surnames – none of this first-name business! There were only around 350 of us, nothing like the 800+ (?) now. Girls were only in the Sixth Form and we had to walk to the New (Jubilee) Ground – we weren’t bussed there like today! The only winter sport being rugby or rugby ☹. However the same camaraderie is there – that unique school bond, all of us very proud of being at the College during our time there and afterward. And the school uniform hasn’t changed! We were at school from 8.20 to 5.30 pm Monday to Friday and to 4 pm on Saturday. Saturday school is no more, apart from inter-school sports fixtures. Speech Day and the final year Leavers’ celebrations are something really special – something that we never had in the late 1970s.

Seb: I think the College has changed dramatically in the period of time between my leaving and my brother joining, let alone the changes since the 1970s. I agree that the camaraderie within the House system has definitely been maintained. The subjects available have definitely changed and of course the addition of Girls’ Houses. Thank goodness the sport available has changed too, playing football and representing the school was always a privilege.

Did you study similar subjects or enjoy similar extra-curricular activities?

We both did Business Studies at ‘A’ level, that’s where the similarity ends…… Sebastian achieved excellent grades and later a First at Birmingham – myself somewhat at the lower end of the academic scale. Sebastian enjoyed his football at the College, I just enjoyed bunking off top to see the Albion at the Goldstone. I helped out backstage on a number of drama productions with John Griffin which I always enjoyed.

What was your favourite thing about school?

Paul: Definitely the lifelong friendships that we made and the extraordinary characters that were the teachers (eg Messrs Minor, Ridler, Allen, Hamilton, Hankins). School food wasn’t really that bad and lunchtime was always a good occasion.

Seb: The best part of school life was definitely time spent with my housemates. Nothing but great memories with the boys who are still a massive part of my life, we all live around Battersea/Clapham now.

How do you think your experiences at the College were similar or different?

Paul & Seb: To be honest the quality and depth of the teaching and testing are so vastly different today.  Our 1970s teachers would let us freewheel, there was minimal ongoing testing and no real desire to encourage learning outside of lessons. And our academic results reflected that….  The pastoral side of College life is so now so much better, there is far more emphasis on the care and welfare of the pupils and staff. Inter-House rivalry is very much the same and similarly continues after leaving.

Seb, are you interested in pursuing the same career path as your Dad?

I am keen to pursue a career in the business world, for sure. However, I won’t be following my Dad’s path into accountancy – that's just not for me! I’ll hopefully replicate Dad’s success in a different area of business.

How will you celebrate Father’s Day?

Paul & Seb: Hopefully, we will all be together and have a family barbeque in the garden. Toby has his GCSE results this summer… and the College continues to be a very significant part of our lives.