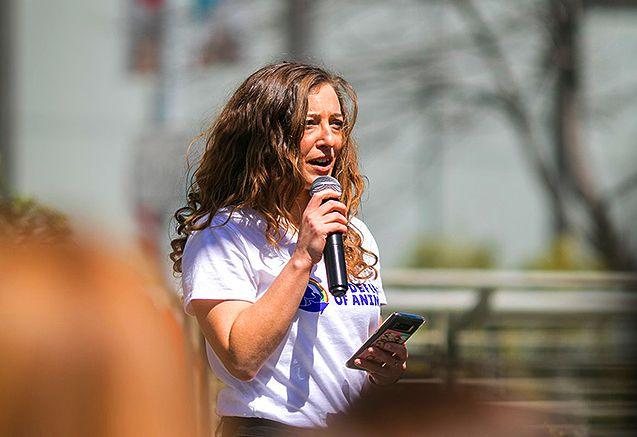 Fleur (Wi. 1999-2004) is Communications Director for In Defense of Animals and lives in San Francisco. She's a passionate animal rights campaigner and has travelled all over the world fighting for animals lives. She spoke to us about how she knew from an early age that she needed to work to protect animals and that she'd actually be quite happy on a desert island.

At my entrance exam into Brighton College when I was 10 years old, I specifically remember being asked what I wanted to be when I grow up. I said I wanted to be an equine veterinarian and run my own clinic to rehabilitate horses. My dream was sparked by learning that many horses are simply shot due to injury, which sadly continues even to this day. I came to realize that animal industries aren’t accidentally cruel — animal abuse is an intrinsic, baked-in part. “Might is right” is a very primitive way to approach life and it’s harmful to animals and ultimately we harm ourselves by perpetuating cycles of violence. Times are changing but more voices are needed. Now I’m campaigning to end animal abuse industries entirely rather than propping up animal cruelty. When we stay silent, we are choosing the side of the oppressor — so my goal is to get as many people speaking out for animals as possible.

Now I've "grown-up", I work as a Communications Director for In Defense of Animals, an international animal rights organization based in the San Francisco Bay Area. It means I work with celebrities, direct our public relations and marketing, manage our graphics and social media departments, and be a spokesperson for animals on national media. Since there are billions of animals suffering on our planet, the work feels literally endless, but it is often fun and rewarding to work creatively to help people connect with their feelings and empower them to make a difference. I feel very blessed to work on my passion every day.

I was quite naughty at school, so some of my most memorable memories involve sneaking around, hiding from teachers and trying to avoid sports lessons... which is ironic because I now exercise every single day! My interest in yoga was nurtured by fantastic yoga classes and meditation sessions at Brighton College. They started while I was at the College and stemmed from a suggestion by my mother… I believe part of the reason they were established was to help me stop bunking sports. It worked! One other incredible project I was a part of was the Dracula Spectacular Show. It was an enormous undertaking by some very professional and dedicated school staff. Anyone who remembers it feels that we did the staff proud thanks to their excellent leadership... they certainly deserved glass of bubbly at the end of it all! It was wonderful to be a part of it.

I'd ask school age, Fleur, to give teachers a break! I found life as a teenager hard and I wish I’d had more compassion and empathy towards my teachers so I could understand that all of us are dealing with our own traumas and priorities. When you become an adult, you don’t suddenly become perfect — we continue learning throughout our lives and use our experience to help others on their journeys. I wish I could have cut my teachers some more slack and I hope they are more understanding and compassionate for some of my behaviour!

The most challenging part of my job is dealing with the horrendous things that humans do to animals. First, some of the things I’ve witnessed are haunting and psychologically challenging. Second, it’s very tricky to convey the suffering of animals without turning people off. Once you’ve successfully overcome those challenges, you still must face the worst thing of all: humankind’s apathy. But it’s important that we oppose oppression wherever we see it. As Dr Martin Luther King Jr. puts it, “injustice anywhere is a threat to justice everywhere... Whatever affects one directly, affects all indirectly.”

Despite the challenges, positive change is happening. It’s been inspiring and fulfilling to see how much we have changed even over the past couple of decades. But we must still fundamentally change our relationship with animals and the planet — on which we rely for our own survival. It requires each of us to make a personal change and I challenge everyone reading this to make positive choices every day towards the world you want to see. Little by little we can change the status quo and support a truly just and equal world.

What would you say is your biggest achievement to date?

I'm exceptionally lucky in the fact that I have been interviewed by many big media organisations such as the BBC, Sky News, ABC, and the Los Angeles Times which most recently did a piece about my organization’s work to save California’s rare Tule elk from being shot to benefit beef and dairy farmers... in a national park! I have also had the pleasure of working with many eminent people of our time — I’m currently working on launching a new project with Dr Jane Goodall to update our language since in the 21st-century animals are still being objectified as an ‘it’ rather than a ‘who.’ One of the most memorable moments of my career to date was directing a video to end animal testing of cosmetics sold in the EU starring Ricky Gervais — and my colleague’s rabbit! That campaign was particularly satisfying since the landmark law we were lobbying for was subsequently passed and has inspired great change for animals suffering in laboratories and had a ripple effect around the world.

I have also been humbled to play a part in the campaign for the world’s first fur sales ban in a major city, San Francisco, where I now live. Making speeches at rallies, lobbying politicians, and giving testimony at city hall alongside a diverse community of animal activists feels so empowering, especially when it pays off. It’s much more usual for animals and the environment to lose and these major wins are sadly the exceptions, but we keep on fighting for what’s right. To quote Dr Martin Luther King Jr [again], “the moral arc of the universe is long, but it bends towards justice.”

So long as there are coconut and banana trees, I think I'd be pretty happy on a desert Island. Nature is so generous and provides for all our needs. It would be nice to have a copy of The Odyssey… though it would have to be in English since I’m not sure how much Latin I remember nowadays!

Human memory is very compromised; millions of people have come and gone before us, so I think it's very ambitious to want to be remembered! Ideas have more longevity than human lives or memory, so rather than being remembered I would prefer to devote my life to helping an important idea take root: that animals are not property, and have the right to their own lives and freedom from suffering.