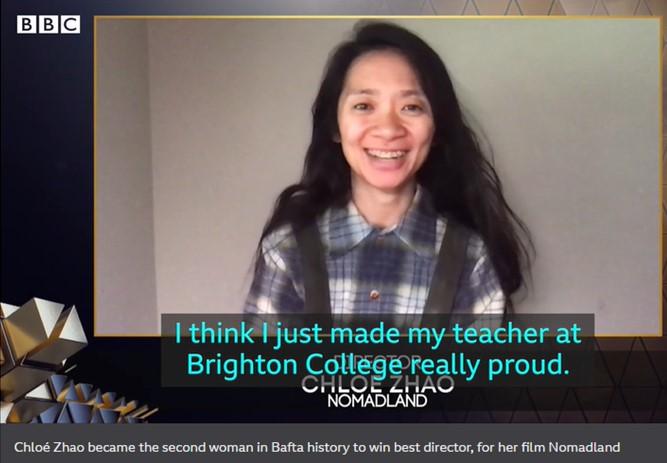 Chloé made history by becoming the first woman of colour to win Best Director at both the BAFTAs and the Oscars, and in winning becomes only the second woman to do so. Nomadland also picked up gongs for Best Film at the Oscars, BAFTAs, and the Film Independent Spirit Awards, as well as the film's star, Frances McDormand, winning Best Actress at the BAFTAs and the 93rd Academy Awards.

We were thrilled to see Chloé give her old school a mention during her BAFTA speech when she said that she thinks she will have made her Brighton College teachers "very proud".

Nomadland tells the story of Fern, a woman in her sixties who, after losing everything in the Great Recession, embarks on a journey through the American West, living as a van-dwelling modern-day nomad. It's been described as 'deeply felt, moving, meditative, compassionate and beautiful' (Claudia Puig, FilmWeek) and Chloé has been praised for treating her subjects with 'respect and curiosity' (Lidija Haas, The New Republic).

We're all very proud of you, Chloé!