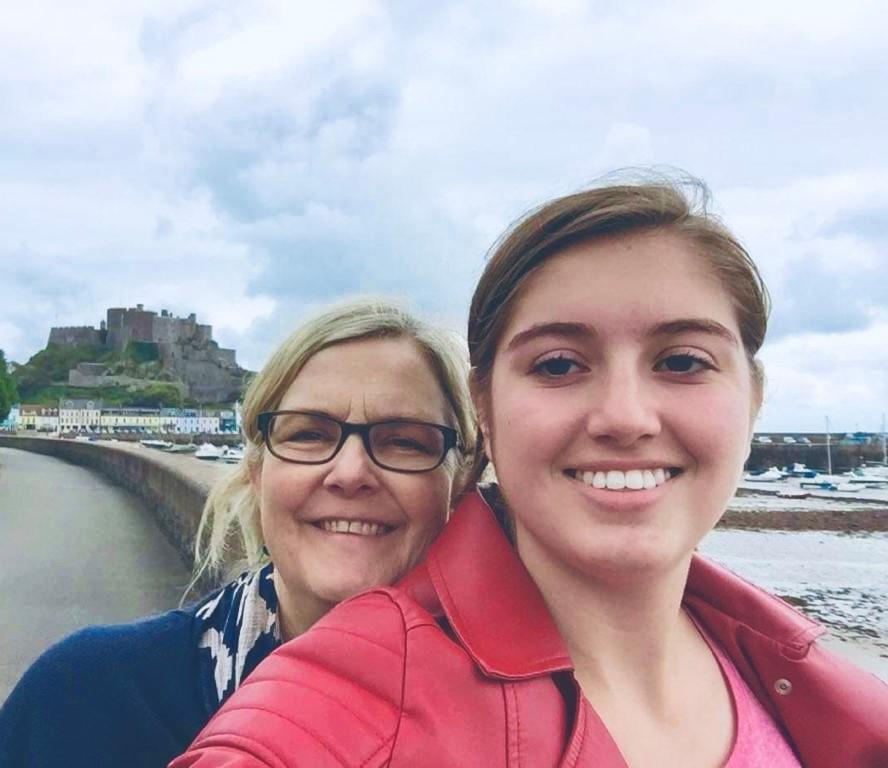 To celebrate Mother's Day, we spoke to a mother and daughter who are both Old Brightonians. Shirley (Fe. 1976-78) and Emma (Wi. 2009-17) compared notes on their lives at Brighton College and told us how they celebrated Mother's Day during the lockdown.

Tell us about yourselves.

Shirley: I’m a qualified Architect and I’m currently WFH (isn’t everyone?!) though going into London, visiting buildings and sites when I need to. I work as a Neighbourly Matters Surveyor which is to say, I negotiate agreements on behalf of developers in so far as they affect neighbours and the owners of neighbouring buildings. Life in the pandemic has meant no commuting which has to be a good thing.

Emma: I am currently a research master’s student at the University of Liverpool, studying ageing in the musculoskeletal system. The pandemic has definitely been a challenge as it has been for everyone, but I find myself to be very fortunate in that my studies have barely been affected, and my family has remained safe and healthy.

Shirley, why did you choose to send Emma to Brighton College?

Emma: I don’t know, mum, why would you possibly send me to Brighton College?!

Shirley: We were living in south-west London at the time and looking for a new school for Emma; one of the reasons was that Emma was really into sports and the traffic in London meant everything took so long to get from A to B; we had also outgrown our house. I attended an Old Brightonians dinner and heard Mr Cairns deliver his speech on the first Brighton College pupils – their history and what became of them. He was a really very inspiring speaker… and the penny dropped. I wanted Emma to come to Brighton College with Richard Cairns as Headmaster.

Where you in the same house and how do you think your time at Brighton was different?

Shirley: I was in Fenwick. I think our times were very different – I boarded, we didn't have any social media and I was only in the 3rd intake of girls... we were only in the 6th form, so we were a bit of a novelty.

Emma: I was part of William’s house under the guidance (then) of Miss Sturgeon and Mr Grocott. I think the main difference was that there were more girl houses when I was a student and over different age groups.

Did you study similar subjects or enjoy similar extra-curricular activities?

Shirley: As I knew I wanted to be an Architect, I took A-levels in Maths, Physics and Art – I think we are both keen on the sciences though and I would love to have studied biology as well. We are both quite sporty and were both in the netball team!

Emma: For my A-levels, I studied Biology, Chemistry and Spanish. We both shared a love of netball, we were both defenders if I remember correctly! I mainly enjoyed sport and singing as part of my extra-curriculum, and I dabbled in poker for a little bit but not enough to let me retire early! ;) I do wish I had dipped my toes in other waters, though, like art, languages and baking!

What was your favourite thing about school?

Shirley: There was no uniform at the time for girls….! And we were pretty much allowed to do what we wanted. I felt very free.

Emma: In retrospect, Brighton College offered so much more to me than I realised when I was a pupil. I mainly miss the sport to be completely honest, as well as the social calendar and how well the pupils and teachers get along. University life is very different, and some people can find it difficult to adjust.

Do you think that girls’ experiences at school have changed over the years?

Shirley: Educating girls and their careers are taken much more seriously than it was in my day. We had very little guidance – I was very lucky in that I knew I wanted to study Architecture and made decisions based on that as I went through life. Other friends and I cannot include Brighton College girls in this, were not so lucky and slipped into boring jobs before getting married. Without a doubt, communications are vastly improved – we only had letter-writing to parents and there was one pay-phone per house. Younger people reading this may not even understand that last sentence….!

Emma: Oh for sure! There are more girls in school studying a wider variety of subjects and I feel very lucky that I was given the opportunities to do what I wanted at Brighton College and they have set me up for life in terms of my career prospects.

Emma, are you interested in pursuing the same career path as your mum?

I don’t see why not. Growing up I was always a scientist, but never really gave architecture a second thought because I thought it would be the predictable option since both of my parents graduated as architects. However, as I have gotten older, I have learned to really appreciate architecture and truly how present it is in our modern society.

How did you celebrate Mother’s Day?

Emma: I spent it in Liverpool unfortunately, but I did send mum a few gifts (some photos of us and a plant pot with mum’s name on it as mum loves gardening), and we did a FaceTime as well.

Shirley: Facetime was the only opportunity to catch up, as we are in different cities, but it was lovely, nonetheless. I went for a run on the beach and had a coffee – that counts as a celebration, these days!