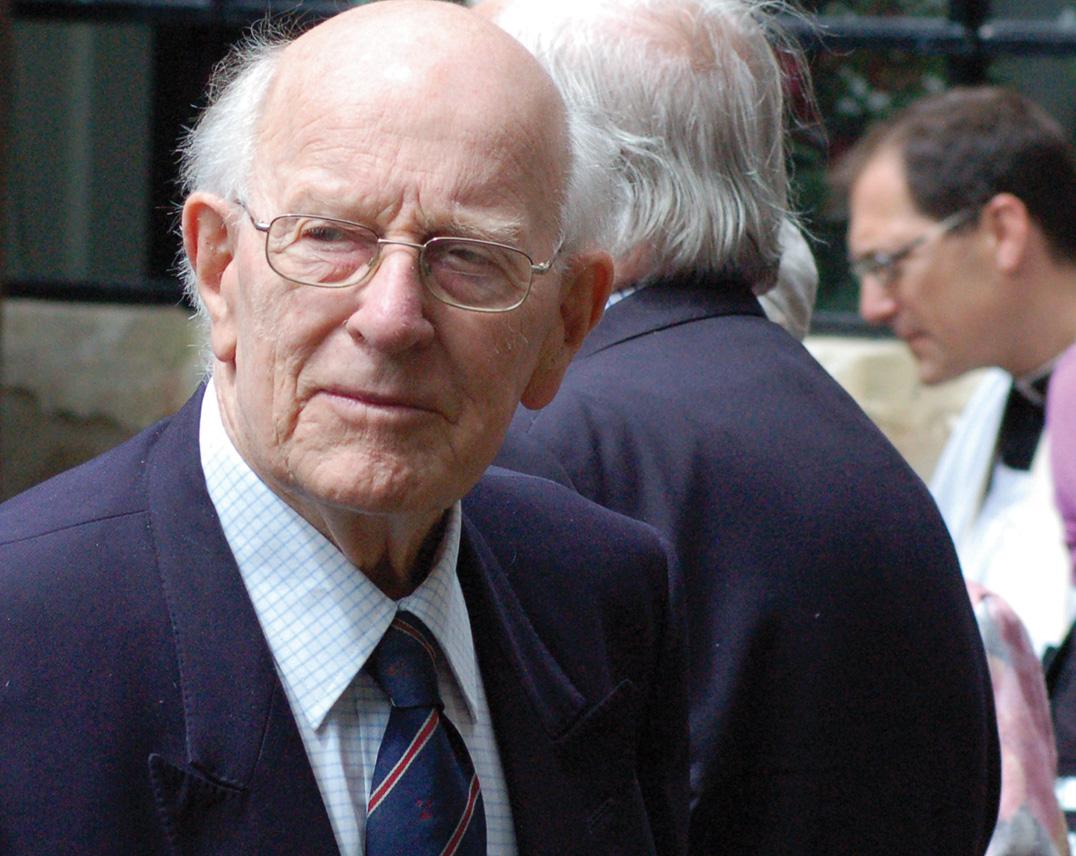 As many Old Brightonians will be aware, Peter died on 2nd October 2007. His memorial service at Bishop Hannington Church on 10th October was attended by several hundred friends from Peter’s wide range of interests, a tribute to the affection and respect in which he was held. Peter himself had a long association with Bishop Hannington Church as a member of the welcoming team “meeting and greeting” members of the congregation as they arrived for services in his own inimitable way.

A fine memorial service concluded with the Navy hymn "Eternal Father, strong to save" and then the singing of "Sussex by the Sea", a song always associated with Peter, who would burst into song at the slightest opportunity.

Inevitably Peter’s connection with the College and the OBA is remembered particularly through rugby, but his interests were far wider. He was a member of the OBA Committee for many years, served as Hon. Secretary, was elected a Vice-President and finally had a very successful three years as President. He was also a prominent member of the OB Lodge, being Master of the Lodge twice and an affectionate tribute was given to him by Chris Apps at the Lodge meeting on 11th January and members of the Lodge will know of his devoted service.

Peter was at the College for a relatively short time and he then served in the Royal Navy during the Second World War. His rugby career started with Brighton Rugby Club when he was persuaded to join by Basil Pett whom he had met in the Pacific Fleet in 1944. He became the Hon. Schools Secretary for the Club and later became a Vice-President.

Peter took over the organisation of the teams for the OB Rugby games against the College, traditionally played at the end of the Christmas term, and in 1959 he re-formed the OB Rugby Club (the original Club at Chessington having closed down at the beginning of the War). He became Hon. Secretary and Fixture Secretary and the Club soon had a full fixture list and ran two XVs. On one occasion the Club put out four full XVs against the College.

For the first few years matches were played over a wide area stretching from North London to as far west as Southampton and over the years there were also tours to the West Country and France. Peter particularly enjoyed the games against Old Boy sides or diverse teams such as United Services, Portsmouth, the Honorary Artillery Company, the BBC etc., and the feelings of friendship engendered thereby. Later the Club joined the Sussex Leagues and achieved some notable successes including the Sussex Cup competitions. Peter himself played for many years, usually as a hooker, and his voice could always be heard encouraging the forwards. His efforts to burrow into the opposition scrum to obtain the ball, at a time when hookers were permitted to swing on their props, led to some interesting front row situations.

Peter later took up refereeing and his interpretation of the laws was sometimes unconventional as was his occasional holding up of play to give an impromptu lecture on front row play to both sets of forwards! His refereeing might also be called brave as instanced when the OBs were leading 18-17 against Sussex Police and playing uphill on one of the sloping pitches at the New Ground and Peter blew very promptly for full time when the Police were pressing for a try about two feet from the OB line.

It is impossible to over estimate Peter’s contribution to the Club as a player, Secretary, President, Sussex Rep., and just about everything else. He ran touch for several years, but this did not deter him from shouting encouragement to the OBs at the same time and Peter’s voice from the touchline was always heard often as a solo during quiet moments in the game.

It was his energy and encouragement that kept the Club going for nearly fifty years, and he was always to be seen at training, even on cold winter evenings, welcoming players and joining them for a drink afterwards. He frequently sent out letters, in his characteristically large handwriting, continually putting forward ideas and it was as a result of his suggestions that the Under 21 side, which has been so successful in the Cronk Cunis National Under 21 Competition, was formed.

Peter also played a prominent part in the Sussex Rugby Football Union. He was a member of the committee for 46 years. He was Hon. Secretary of the Fixture Bureau, Fixture Secretary, Selector, Martlets RFC Press & Publicity Officer, Hon. Secretary Youth, Press Officer and Hon. Secretary SRFU Coaching. He had a strong sense of humour and liked to enliven the many meetings he attended by asking provocative questions, whether strictly relevant to the matter in hand, or not.

Peter was known throughout Sussex Rugby and was greeted as a friend by everybody. Extracting him from a club house after a game was never easy as he was always encouraged, without too much persuasion, to have a few more words and a glass of white wine with the many people who wished to speak with him.

He was very deservedly elected a Life Member of the SRFU at the June 2007 AGM, which delighted him and he had planned a party to celebrate but sadly, his final illness prevented this being held.

Although Peter was always a friendly and cheerful presence at matches, he nevertheless promoted high standards of behaviour and insisted that OB teams turned up on time and wore clean kit, that the touch judge had a flag and, above all, that the opposition teams were welcomed and looked after and that the referee was properly greeted, thanked and made to feel appreciated after a game. He could become impatient if he felt that things were not done in a way he thought proper, but because he was Peter, the recipient of a blast quickly forgave him. Being hospitable was a characteristic of Peter. He was a great believer in parties as a means of strengthening the bonds between players. He also had a unique ability to be friendly to people of all ages, from young members of the College to parents or up to the President of the Rugby Union and he showed a real interest in everybody he met. He was a recruiter par excellence, and very persuasive and would not be put off by any initial rebuff from those he was trying to recruit.

Peter was a genuinely kind person. He was concerned for others and enquired of their welfare and that of their family and friends and was the first to check that all was well and arrange a visit if a friend was ill or a player was injured.

Peter had many other interests including opera and rowing. For many years the Rugby Club had its headquarters at the Brighton Cruising Club, under the promenade – a great attraction for teams from London - and this was one of the many things that Peter arranged and which has given the Club its special character.

Above all, Peter was a family man and his family was what was most important to him. His dear wife, Mary, looked after him wonderfully, with calmness and good humour throughout their long marriage, and she herself deserves a medal for her patience in dealing with the hundreds of telephone calls for Peter and the many other problems besetting those involved in organising rugby. Peter could not have been Peter and lived the happy life he did without her. He was very proud of his three daughters, Hazel, Sarah and Katy and of his grandchildren - he was devoted to them all.

Peter was active to the end, attending a Royal Garden Party in the summer in recognition of his services to rugby and having the great joy of Katy’s wedding.

Peter was a person of great loyalty to his family, to his friends, to the College, the OBA, the County and Clubs and teams with which he was associated and he inspired great loyalty in return. We will miss him.