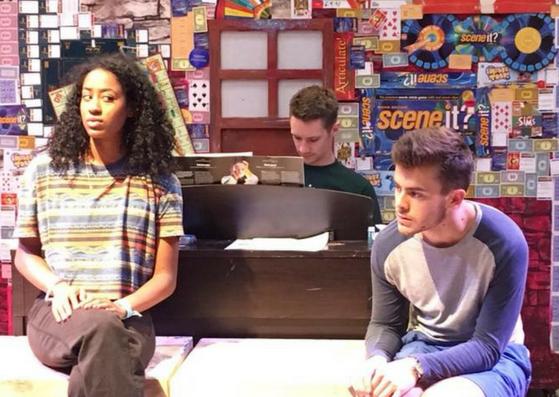 Fortnite? SIMS? Monopoly? Chess? Imagine a world in which the adults vanish - and under 18s live in 'clans' according to which games they play...

Not content with the best A level results in England, our 2018 Leavers (led by Dixie McDevitt) wrote, performed and produced their own play entitled The Snowflake system- a stylised musical comedy which ran for three nights in August at the ever so charming Montague Studio.

The Snowflake System was a play dreamed up, written and composed by myself and Natasha Vincent, and later added to immeasurably by the wonderful cast in rehearsals.

The ethos of the play was first and foremost to enjoy every second and to say yes to every crazy idea in an attempt to rekindle our playfulness after the all too adult realities of A Levels and university applications. The finished product, a mad and surreal musical about the fear of leaving childhood, surpassed our expectations considering we only had two weeks to put the whole thing together.

The experience as a whole was invaluable, especially to those of us hoping to pursue careers in the theatre, as nothing could have prepared us for the amount of hard work it takes to create a new show as well as to market it and put it on, and now we are in the privileged position of being the Yesmen (and women) in our future projects. For this reason, we think turning the Leavers' Production into a yearly tradition not only gives the Upper Sixth one last project together, but also serves as a stepping stone towards the overwhelming world of professional theatre.

Our team managed to double the initial £300 gifted to us by the Ros Nichol award, leaving £592 for the year below us. In other words, it was a huge success. In fact, Natasha and I enjoyed writing the play so much, which received glowing feedback from our audiences (admittedly mostly family and friends, but still!), that we have decided to work together to write more theatre now that we have entered the adult world.