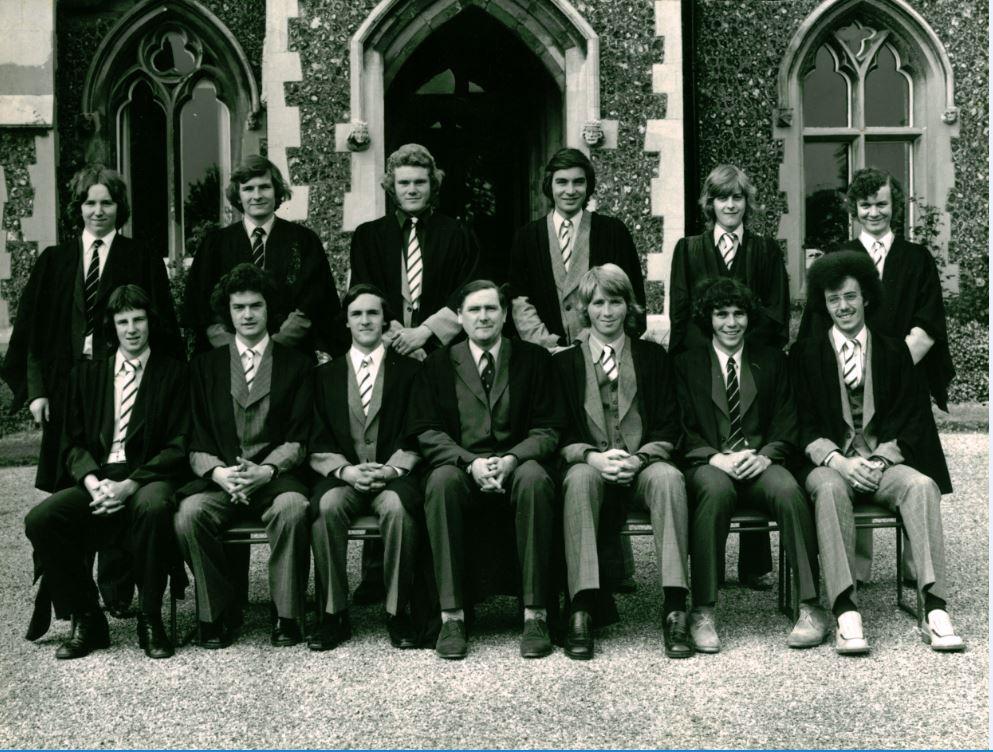 In September, we invited Patrick Hicks (BCJS/Le. 1967-74) and Jeremy Charles (BCJS/Sc. 1964-74) back to Brighton College to be interviewed by current pupils, Dan Kimber (Ry. Upper Sixth) and Ella Ticktin-Smith (Ch. Upper Sixth). Their reminiscences will soon be made available in a short podcast on the Old Brightonian website. Here, Patrick reflects on his experience of returning to Brighton College after 50 years.

Go to any business conference these days, and the odds are that one speaker will quote that well-known management-consultant joke – “Prediction is very difficult, especially if it's about the future”.

These words came to my mind one sunny lunchtime in September, as I drove down Eastern Road – exactly 50 years after I first arrived at Brighton College Junior School. Could I have predicted - all those years ago, as I stepped through the door of the Junior School - that I would be invited back half a century later, to contribute to a ”Podcast”? Well, obviously not…but the thought still crossed my mind.

My trip down Eastern Road – or Brighton’s version of “Memory Lane” - was actually the first time that I had returned to “the College” since I had left Brighton in December 1974. Although not as nervous as I had been on that first day at BCJS, there was still the tingle of anticipation that you feel when going back to somewhere which has taken up so much of your formative years.

The invitation to do the Podcast had come from Abby Wharne, the Keeper of the Archives at Brighton College. That, in turn, had come about because Jeremy Charles, who had arrived at the Junior School three years before me, had been clearing out his attic and had sent Abby some of his old school photos for the Archive files. In return, Abby had suggested that he might like to be one of the Guinea-Pigs for the new Podcast project that she and the school were planning – a chance for OB’s to reflect on their years at the College. Could Jeremy recommend anyone else? Correctly recognising my ability to recall things that had taken place in the 1960s and 70s significantly more accurately than things I had done the previous week, Jeremy asked me to be his co-Podcaster.

We were met by Abby in the reception area of the Dawson Building – beautifully refurbished from our day (It had been a really out-of-date building even in the 1970’s). A great deal of my teenage life had been spent there – French, German, History, Maths, English and Latin. Abby took us on a tour of the College, following in the footsteps of many a curious parent considering sending their offspring there. When Jeremy and I had been at the main school (1969 to 1974), there had been about 350 students – all boys until our final year, when the first girls arrived. With more than double that number of students now, I was really impressed how both the growth in size and the presence of girls has been accommodated - how the “old” architecture has been maintained and developed; and, of course, how the new buildings have been introduced.

Nothing seemed to have changed to the front of the main building, nor to Bristol and Chichester Houses, nor to the Chapel or the Hall. These were exactly as I remembered them. My House had been Leconfield – and, although we didn’t enter the building on this occasion, I noted with some nostalgia that the window-frames on the 3rd floor had not been painted since December 1974. We moved on to the back quad - centre of CCF activities on a Monday afternoon; an empty space all those years ago, now filled with an impressive science structure.

Then into the main building, where we were taken to the dining area – same room, but much brighter now. Jeremy was pleased to spot his name on the Oxbridge Scholars Honours Board; and there, a few years earlier, is my brother Michael, an unknown name from a time long-ago, meaningless to those students who walk past it every day.

Time had stood still during our 30 minute tour, but the afternoon was speeding by. Abby led us up the road to the Archives Office – one-time home of Mr Lester, legendary Brighton College Maths Teacher. He had never taught me, but he did teach my brother. Apparently it had taken some time to eradicate his pipe’s smoke stains from the walls and ceiling, but the feeling of “quiet research” lives on.

Abby introduced us to her colleague Veronika (who confirmed my suspicions, that I hadn’t received a single OB communication since I had left), but now added me to the database. Tea was served, thus breaking Abby’s golden rule of “no-food-in-the-Archives room”. And then the two project managers – Ella from the Upper 6th and Dan in the Lower 6th – arrived. After introductions, we discussed the issues and topics that we felt might “work” for the Podcast – what would be interesting, and what would sound like two old f…well, let’s just say, two OB’s droning on.

The microphone was set up, the recorder switched on – and the Podcast began.

Ella and Dan had planned the project well, making detailed preparations. They were curious to compare day-to-day life at the school now, with the early 70s. They had researched their material carefully and posed the questions clearly and with interest. When you are 18 and you are introduced to 60-somethings, it is obviously difficult to “engage” with them - everything of course appears “old”. However, they did a great job to cover up any doubts that they may have had, they carried out the interview with ease, patience and charm. We talked about all sorts of things, about work and games, about food and drink, about town and gown, about long hair and music, about technology and fashion. About what had changed – and what had not. Coincidentally, there had been a referendum when we were there, in 1973, when British voters had to decide whether the UK should stay in the (then) European Economic Community.

The 40 minutes of the recording raced by.

In that small room steeped in College history, Jeremy and I were transported back to a world we probably hadn’t thought about for years – the time, the place, the conversation made us feel almost contemporaries of our interviewers. But, just as quickly, it was suddenly all over and our time was up – and Abby stepped forward to switch off the recording. Back to the present and reality and daily life: our interviewers had homework to do. Nothing really changes, does it?

Jeremy and I said our good-byes to Abby and Veronika. And then we did the obvious thing - a quick pint at the “Ginger Dog” in College Place. Once notorious as a place where boys would try to avoid masters (and vice versa), it is now a fancy gastro-pub. The past was, indeed, over.

I hope the “Podcast” project succeeds, it is a great idea and will probably evolve into different formats, as it develops. And I certainly hope that other OB’s will accept an invitation to be part of it. Maybe this should be the first of a series, with contributions from OB’s from different eras - and possibly venturing down different themes: sports, drama, politics; even podcasts specific to different houses or headmasters.

As I drove back to London, I thought about the afternoon. Inevitably, I felt something of a “sham”, as I really haven’t done too many world-changing things in the 40-odd years since leaving the College. Would my recollections of my years in Brighton be any more interesting than those of our more illustrious OBs - those who have “climbed new mountains, named a sea”. Or even played cricket for England.

But maybe that is the whole point of this particular Podcast project - a chance to share the experiences of just “normal” Brightonians, the same as thousands who have passed through the main gate before us; and who - I can confidently predict! - will continue to do so for many years in the future.