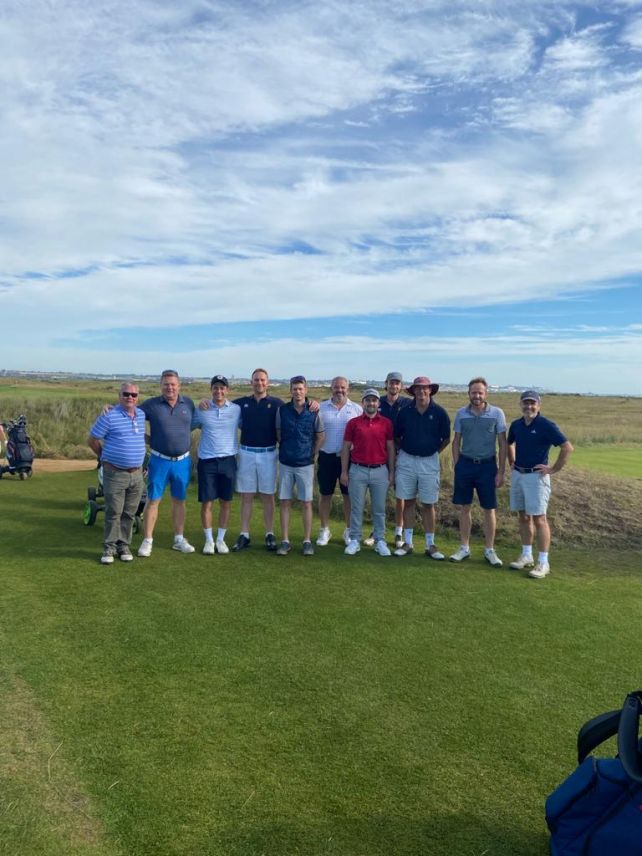 The Old Brightonians Golf Society is going from strength to strength and has had a great year - including some giant-killing in the Halford Hewitt Cup...

The Old Brightonians Golf Society were lucky to enjoy a full calendar of golfing events in 2021, albeit re-arranged to the second half of the year. There was a real enthusiasm to play and every event was a joyous affair.

We traditionally commence the year with our annual meeting at West Sussex Golf Club in March for the match between the President, Chris Pett (Ha. 1962-67) and Secretary, Julian Hunt (Du. 1984-87). Due to Covid, we played in August. The event was very well supported and the weather was kind. The entry was noteworthy for including three father and son combinations – Petts, Hunts and Suttons. With the President’s team storming to victory, I am bound to say that the result was of less importance than the fact that we all enjoyed a wonderful day at the magical setting of West Sussex Golf Club.

Six intrepid OB golfers narrowly failed to qualify for the Grafton Morrish Finals in squalling rain and gale force conditions that made golf a bit of a lottery. In the Sussex Cup, we came runners up to Hurst, a valiant rearguard after a slow morning.

Our autumn meeting was played at Guildford Golf Club, organised by Alan Chesterfield (Du. 1973-78). Once again there was an excellent turn out with a real spread of OB golfers ranging from the young to the senior. As ever, all ages mixed as one and it was a truly convivial affair. As to the golf, Dylan Christie (Du. 2005-10) arrived with an unengraved and uncleaned Whitmore Bowl. It was only right and proper therefore that Dylan defended his Bowl and took the trophy away with him for cleaning and engraving ready for 2022!

The Old Brightonian Golf Team embarked on their annual pilgrimage to Kent this September for the Halford Hewitt Cup. This is an annual event competed for by teams of ten old boys and girls from 64 public schools.

Due to Covid, it was moved back to September, and the change in dates meant we were without several big guns including Riaz Rattansi (Ch. 1985-90), Mark Budd (Du. 2004-09) and Roly Ainsworth (Du. 1992-97), but we managed to put together a decent squad, which reflects the increasing quality within the Old Brightonian Golf Society.

However, the draw was not kind to us, as we were pitted against the mighty Charterhouse (16 times winners of the event and ranked number 1).

The weather was glorious for the practice day on Wednesday at Princes and everyone was in good form. Chris Gates (Ry. 1985-90) announced the team in the evening and rallied the troops with some positive comments that we all had a chance of winning. Even so, it was with hope, rather than expectation, that we set out on Thursday morning to take on Charterhouse.

Things didn’t start brilliantly with our first drive, in the words of the starter, “nearly landing in Belgium!” However, we managed to keep most matches tight through the first 9. This was continued deep into the match so that it stood at 2-2 with our fourth pair of Dylan Christie (Du. 2005-10) and Freddie Pett (Ha. 1999-2004) 2 down with 4 to play. A magnificent fightback saw them start the 18th 1 up and raised levels of excitement within the watching crowds.
Could the greatest Hewitt shock of all time be about to happen? Unfortunately, we lost the 18th so it was into extra holes. The first was halved, but then some excellent play by Brighton left Dylan with a 10-foot putt to win the match. He calmly knocked it in, to scenes of euphoria and shock from Brighton. What a win!

We were the talk of the clubhouse. We probably celebrated a little too well that afternoon and evening which lessened our chances the next day against Tonbridge (ranked 2nd). And thus, Friday was not quite the same level of sharpness and we succumbed 3.5-1.5.

Overall a great Hewitt, in which the team really showed it has the ability to compete at this level and perhaps go beyond the 2nd round in 2022.

If any Old Brightonians would like to be involved in the Hewitt or other events we run throughout the year, please let us know. There is a real mix of ages and it is really great fun.