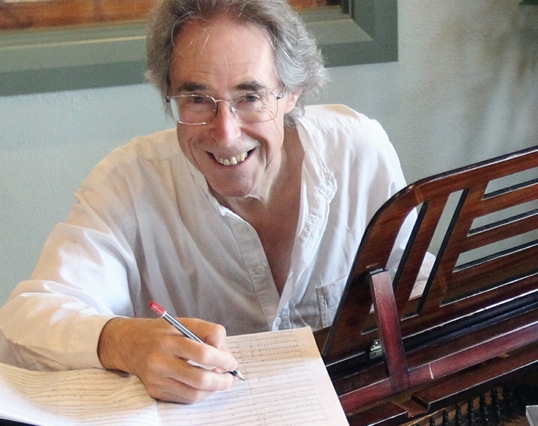 PAUL LEWIS was born into a family of professional musicians in Brighton, England, in 1943. As a child he was fascinated by history and ancient buildings, reluctantly learning the piano from the age of nine. At twelve he saw the Shakespeare films of Laurence Olivier with Walton's music and immediately realized he had to be a composer. He purposely avoided all formal training, choosing instead to leave school at fifteen and enter music publishing to find out how the music business worked from inside.

After leaving the College Paul had little contact with the school until recently when he was rediscovered by one of the College's music staff at a Jubilee Street Party! Since then Paul has been in to the College to conduct a rehearsal of his piece 'Rosa Mundi', subsequently performed by the College Chamber Orchestra at the Autumn Concert and more recently at the Theatre Royal Evening, and has very much enjoyed his renewed acquaintance with the College and the Old Brightonians. "I will never forget the concentration of those beautiful young musicians as they played "Rosa Mundi" with such feeling. Thank you so much for bringing me back into the College."

Another of his pieces is being performed by the College this week as part of the May Festival at St George's Church, Wednesday 8th May 7pm - 9.30pm.