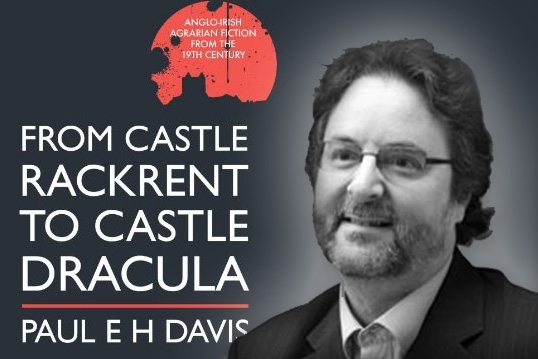 Dr Paul E H Davis (D. 1974-79), who lives in Hove, Sussex, was educated at Brighton College, the University of Chichester, and the University of Buckingham where he studied for his Masters' degrees, and later for his D.Phil.

He has researched nineteenth-century Anglo-Irish literature for nearly two decades beginning with the novels of J S Le Fanu and then moving on both to identify and to examine the sub-genre of Irish agrarian novels. Although he has had several articles published, From Castle Rackrent to Castle Dracula is his first book. He is currently a Visiting Research Fellow at the University of Buckingham working on the Dickens Journals Online project - which is based at the University - and is also a Fellow of the Royal Society of Arts.

About the Book
This challenging book offers an entirely new critique of how novelists in nineteenth-century Ireland had to act both as writers and historians in their attempts to find a solution to what became the Irish Land Question. It challenges the widely-held, nationalist view that Irish novelists of this period had little or nothing to offer, and introduces a new, identifiable category for them: the agrarian novelists. The book is divided into three parts, each with its own short Introduction and Conclusion. Part One considers novelists writing between the Union and the Famine: Maria Edgeworth, Gerald Griffin, John and Michael Banim, and William Carleton. Part Two looks at how the Agrarian novel `emigrates' with reference to the novels of Charles Kickham and to the Irish novels of Anthony Trollope. Part Three considers how some agrarian novelists - specifically Thomas Moore and Bram Stoker - felt the solution lay not in the real world but in the world of fantasy; in short, the problem is transposed from Ireland to Transylvania. The book's conclusion offers an explication of why the agrarian novelists deserve to be valued for their unique perception of Ireland in the nineteenth century.

'The most impressive element of the book is its total saturation in its subject matter, the way a large range of novelists and novels have been mastered in depth so that connections and comparisons naturally arise ... [It reveals] scope, thoroughness, integrity, lack of skimping, or over-reliance on secondary opinion [and] exemplary awareness of historical complexity and commendable honesty about its own presuppositions.'

For further information visit www.angloirishliterature.com or you can purchase the book from all good bookshops or on-line at Amazon.