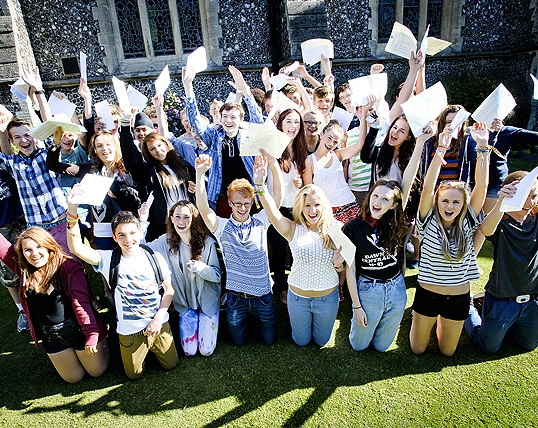 Not to be outdone by the record-breaking Upper Sixth, our GCSE candidates have also enjoyed a record set of results. More than 90% of grades were at A* or A (those grades demanded by leading universities) and, astonishingly, the most common grade of all was an A*.

It was great to see Emma Harris celebrating 11 A* grades on her 16th birthday today, Sam and Annie de Belder sharing 20 A* grades and every English boy or girl sitting Mandarin Chinese getting an A*. There were, of course, many other personal highlights and a lot of very happy and relieved faces.

For those who enjoy their statistics, the historical pattern over six years has been as follows for A*/A:

Once again, these are comfortably the best results in Sussex and place Brighton among the top 5 co-educational schools in England for 5 years in succession.

Richard Cairns, the Head Master is delighted:
"This has been quite a year for the college: the award of England's School of the Year from The Sunday Times and now record results at GCSE, AS and A-level at a time when top grades nationally have fallen. I really am delighted with everyone's results - not just those with a clutch of A* grades but also (and especially) those pupils who found some subjects a struggle but triumphed nevertheless - perhaps with a B grade that seemed impossible only a few months ago.
Congratulations are due to the teaching staff for inspiring so many pupils to give of their very best, to the children who responded so magnificently to the challenge placed before them and to their parents for supporting them every step of the way. Everyone deserves a big pat on the back!"