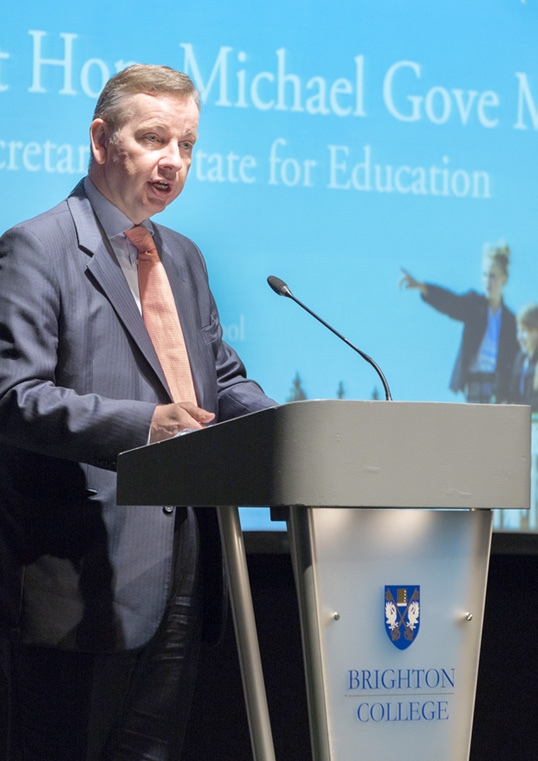 Speech by the Education Secretary, Michael Gove, at Brighton College

The Secretary of State for Education, Michael Gove, visited Brighton College earlier this month and spoke at our education conference.

His speech, which opened with comments about the College itself, has since received extensive coverage in the press. Following these press reports, many parents have asked for details of what he said about Brighton, and I am therefore pleased to attach the relevant extract from his speech for your information.

"It is one of the many pleasures of being Education Secretary that I get to visit outstanding schools every week – and am constantly impressed by the amazing work of so many inspirational teachers.
We have hundreds of superlative independent schools – collectively the best independent schools sector in the world.
And given the quality of the competition, it is a wonderful accolade for Brighton College to be named UK Independent School of the year.
Wonderful, but not surprising.
Because those of us who know Richard Cairns recognise that he is one of the most visionary leaders in education today.
Brighton College’s improvement in the last few years has been breathtaking.
Moving from 147th in The Sunday Times league tables in 2006, to 18th this year and now the highest-ranking coeducational school in the country, Brighton College was described by the judges as “one of the powerhouses of the independent sector.”
And Richard has done what every school leader determined to secure excellence should do. He’s been a curriculum innovator. He’s introduced Mandarin Chinese as a compulsory subject until the age of 14.
And he’s made narrative history, locational geography and the great canon of English literature compelling for a new generation of students with a wonderfully inspiring introduction into the glories of our island story.
He recognises that nothing matters more than improving the quality of teaching.
Over the last six years, Brighton College has aggressively recruited, and generously remunerated, talented individuals from a range of backgrounds, in order to boast, in Richard’s words, “the best teachers in the land”.
He’s been ambitious to spread excellence beyond his own school.
Richard has expanded Brighton College’s reach by taking over other schools, enabling hundreds more children to benefit from Brighton’s unique and award-winning recipe for success.
And, above all, Richard has combined an unflinching focus on academic standards with a deeply held social mission.
As well as expanding scholarship access to this school Richard is leading a consortium of independent schools which are sponsoring a new free school in Newham – the London Academy of Excellence – which will help the poorest students make it to our best universities.
Curriculum innovation, investment in great teaching, spreading excellence beyond just one school, demanding higher academic standards, pursuing a social mission to help the most disadvantaged.
These virtues – which Brighton College embodies – are the virtues which mark out the best in our education system - and they demonstrate that there is enormous public benefit in a healthy and progressively-led independent school sector."