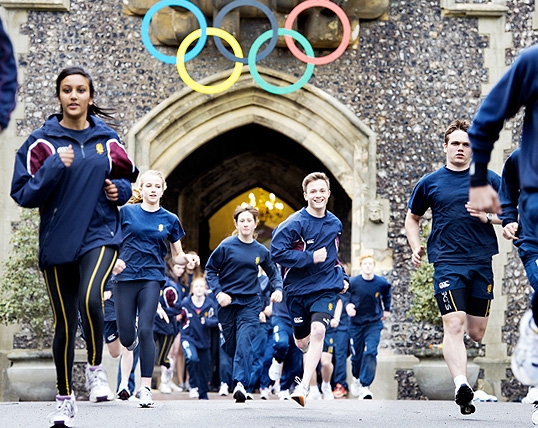 Olympic Week at the College!

As the whole country gears up for a summer of sport, and with London 2012 less than 100 days away, the College had its own Olympic week.

In true Olympic fashion, it started with an Opening ceremony: the Head of School, Sasha Morse, announced Olympic Week officially open, as Deputy Head of School, Alex Kolliari-Turner, paraded the Olympic Torch through Chapel. The Heads of Houses pledged the participants' oath whilst dressed in their House Sports Vests. The rest of the week saw more Olympic themed events, as each House bought into the Olympic Ideal of participation over performance. The A2 Sport Science group presented the History of the Olympics in an enlightening and amusing fashion to the Lower and Middle School on Tuesday.

In DT, pupils designed and made Olympic medals, the 1936 Berlin Olympics were studied in History, whilst in Chemistry, the Lower Third created their own suite of bronze, silver and gold 'medals' as they learned how to change the colour of copper coins.