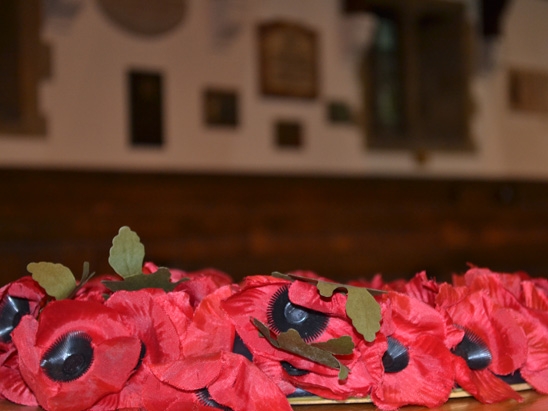 Old Brightonians, including previous members of the Common Room and other ex-Brighton College staff, pupils, masters and parents came together for a moving Remembrance Service on Sunday 13th November.

Houses in attendance were Durnford, Hampden, Heads, Leconfield, School and Williams. Wreaths were laid at the altar and at the 1914-18 and 1939-45 War Memorials by School Prefects and the Chairman Lord Skidelsky (C. 1953-58). A Book of Remembrance was placed on the altar by a member of the Fourth Form, and CCF colours laid by representatives of the three armed services.

Appropriately, for a school on the south coast, the theme this year was the sea; the sacrifice (in some cases the ultimate sacrifice) made by those in the navy, both military and merchant. As always, the service began with solemn rites – the laying of colours and wreaths, and the Act of Remembrance itself, including the reading of the names of those Old Brightonians who died in war – this year those who died in the Second World War and in more recent conflicts. For each name that was read out by the Head Master, a current pupil stood, which was a moving sight to behold. Young and full of life as those past pupils of the College once were they stood in silence as name after name was read, until 179 pupils stood and the Last Post was played. This was followed by two minutes silence.

Music and readings from the Choir and pupils of all ages were enjoyed by all and Old Brightonians who gathered after the Service for a Reception agreed what a moving service it had been.