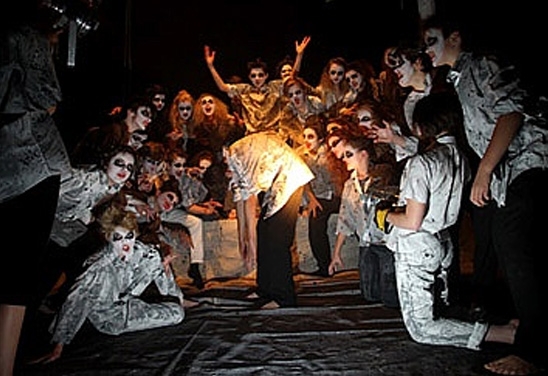 "Grimm Tales" from the Lower School

Conventional seating was dispensed with and instead the audience stood in the middle of the performance space whilst the actors performed the dark fairy-tales around them. The acting was exemplary, with remarkable performances from so many, as Nancy Gladwin and George Oxley, as narrators, led us through this dark world. Congratulations to Dermot Keaney and Harry Ashbee for directing and staging such an original and breathtaking piece of theatre.

"Imaginatively staged, atmospheric but also very funny. School drama at its best, this was an imaginative production thoroughly enjoyed by all, partly because the large number of Fourth and Fifth Form boys and girls involved were so clearly having such great fun."
Mr Withers

"What a magical, fantastical, grimm, macabre piece of storytelling and drama. A night to remember for a long time."
Mr Harrison

"An energetic, accomplished production with every member of the cast and the audience at times, actively involved. A huge success for all those involved."
Mrs Withers

"Grimm by name and grim by nature. Shivers constantly ran up the spines of the audience as ghoulish characters circled their prey in search of poor defenceless victims. Be warned, but above all, be entertained!"
Miss Cody