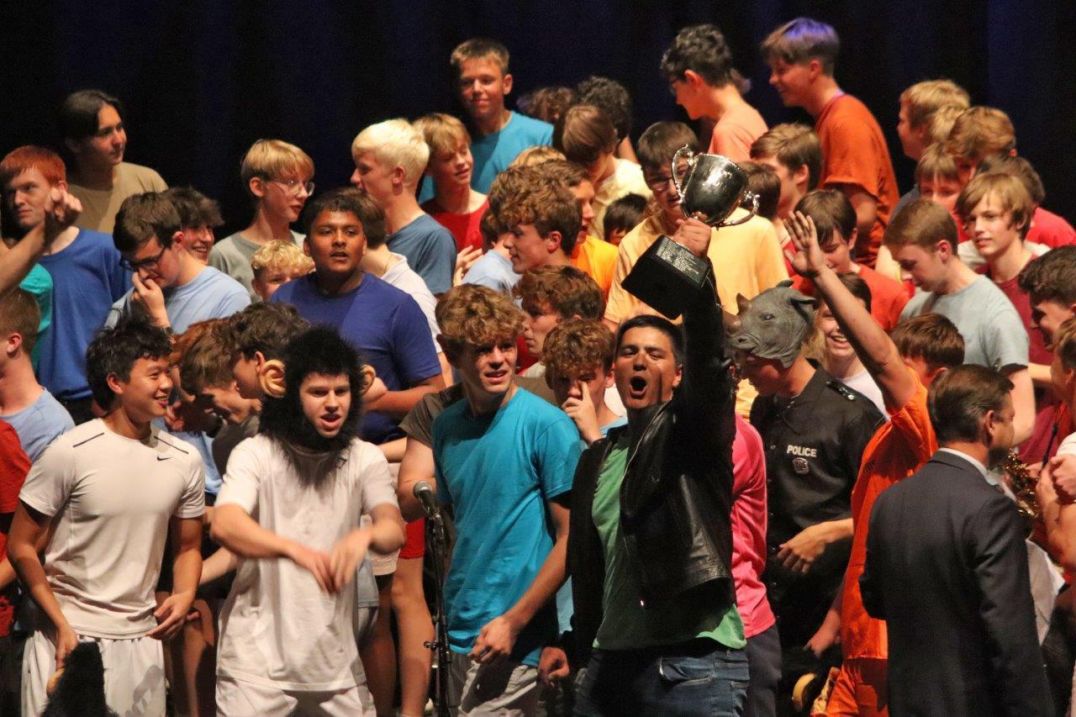 House Song was back, and bigger than ever!

Jaz Sakpoba (Ax. 2019-21) was invited back to adjudicate this year's competition, and takes us through each house's performance...

This year, Brighton College’s illustrious House Song took place at the Brighton Dome, famed for staging the 1974 Eurovision contest, when ABBA won with their song “Waterloo”. The atmosphere was electric, with around 1300 pupils showing up in full costume, ready to take to the stage.

This year’s theme was Soundtrack Classics, and all houses picked a range of sensational classic songs to sing, dance, and play along to on the stage.

The first house to take to the stage was Abraham, with their cover of Katy Perry’s “Hot and Cold”. They performed with fantastic energy and projection, with some great acting skills being demonstrated from the boys: credit to the boys bravely wearing gold dungarees! The performance was thoroughly enjoyable and fun, injecting the competition with great energy from the very beginning, and earning them a well-deserved 3rd place in the overall competition.

Next to perform was School with “Footloose” by Kenny Loggins. What most impressed me was their choreography, with skilled footwork and dance moves matching the upbeat nature of the song, with a highly skilled and professional-sounding band to match.

Head’s’ “Don’t Stop Me Now” by Queen was a timeless classic performed with fabulous energy by all the boys in both their choreography and vocal ability. The band in head’s house was particularly impressive, with the guitar soloist really taking their performance by storm in his spotlight moment.

New’s rendition of “Greased Lightening” introduced a fantastic element of design and visual impact, involving the use of props to physically build the car they sang so clearly and harmoniously about. My favourite part of the performance had to be the standard of vocal ability, with all girls singing perfectly in tune. It was a pleasure to listen to, and so very impressive to watch! It was natural they’d place in the top 5, finishing 4th overall.

Fenwick followed, taking the stage with a confidence and assuredness which promised for a phenomenal performance. Dressed in sports jerseys with dazzling golden chains, they delivered what I deemed the most rehearsed and clean performance with their rendition of “Runaway Baby” by Bruno Mars, with high level and professional choreography and vocals and a confident and highly impressive band to accompany. I most enjoyed how clean both their exit and entrance on and off stage were, giving the impression of a rehearsed dance group, which I believe truly earned them their place as 2nd in the overall House Song rankings.

Aldrich’s choice of song may have been my favourite, bringing ABBA back to the Brighton Dome with their version of “Lay All Your Love On Me”. I particularly enjoyed the acting segment from the boys in wigs in the beginning and was impressed by the attention to harmony. Naturally, my favourite part – and what made it so memorable - were the boys in snorkels and flippers, like in the film Mamma Mia!, which added a fantastic visual element alongside their exceptionally clean-cut choreography, earning them a well-deserved 5th in the overall rankings.

Next up was one of the most visually enjoyable houses, Chichester and “Stick to the Status Quo” from High School Musical. I was drawn in by the four clear social groups, which reflected the original version with impressive proximity. Their projection and commitment to visual craft and stage impact was my favourite part of the performance, with some of the most memorable moments being the various soloists who made their way to the front of the stage, adding an engaging element of narrative to the performance.

Next to take to the stage was Durnford, who, with a range of colourful t-shirts and animal costumes, took the competition by storm with their rendition of “I’m Still Standing” from the movie Sing. The attention to detail in this piece was what made them a clear winner for me, with every member of the house fully engaged in creating a totally ensemble piece, with terrific visual impact and stage craft. From the dancing monkeys to the gorilla father in jail, to the fabulous lead singer, this piece was polished start to finish. Merit must be given to the band, who were fantastic in maintaining the upbeat and fun tempo, and the narrative of the father finding the son was heart-warming and wholesome to watch. It was a pleasure to watch them perform their piece not once, but twice during the competition, and the boys should be exceptionally proud of themselves for such an outstanding performance!

Next up was Seldon, with a fun hip-hop style cover of JLS’ “Beat Again”. The piece was opened strongly by the lead keys player, and was followed by strong choreography including spotlight moments of partner work, and an overall uniformity of costume which resulted in truly effective visual impact. The energy on stage was high throughout, and the girls performed with great energy, and enthusiasm, which was a pleasure to watch all round.

Williams took to the stage with energetic confidence, looking phenomenal in uniform red and black, reminiscent of the colour scheme in The Greatest Showman, which their song choice, “The Greatest Show”, came from. The use of acapella through stomps and claps was unique and engaging, with strong powerhouse vocals and solos setting them apart from their fellow competitors.

Alexander’s “Livin’ La Vida Loca” brought an energy reminiscent of Latin dance to the stage, with impressive partner work, band cohesiveness and vocal tuning and projection. The piece came together with a high degree of professionalism and a powerful sense of ensemble, with the two central partners meriting particular attention for their highly choreographed and well-executed moments together.

Leconfield impressed with a cleanly executed rendition of “Pompeii” by Bastille, arriving in uniform on stage, in black hoodies and joggers, with one boy taking the lead in the centre in white. On top of clean vocals and dance moves, with exceptional use of space and arrangements, were the band, spearheaded by their excellent drummer. Naturally, the highlight of the piece was the use of on-stage lighting using phone lighting, super unique and impressive!

Hampden’s “Love Me Again” by John Newman was characterised by powerful ensemble projection and strong choreography. The boys performed with purpose and certainty, and I was most impressed by the strong unity with their fantastic band.

Ryle’s classic, and popular song choice “What Makes You Beautiful” by One Direction, injected the ending of the competition with energy and fun and a song choice that everyone could clap and sing along to. The applause was rapturous, closed with a powerful ending to what was an exceptional finish to the afternoon.

The Third Form concluded things with a joyful rendition of “Waterloo” by ABBA, bringing it back to the Dome stage with a terrific band, 70s-esque sequins, costumes, and flairs. Congratulations to the Lower School for really driving the competition home and a truly first-class performance!

Snippets of all the performances can be seen via the hightlights on our Instagram page.