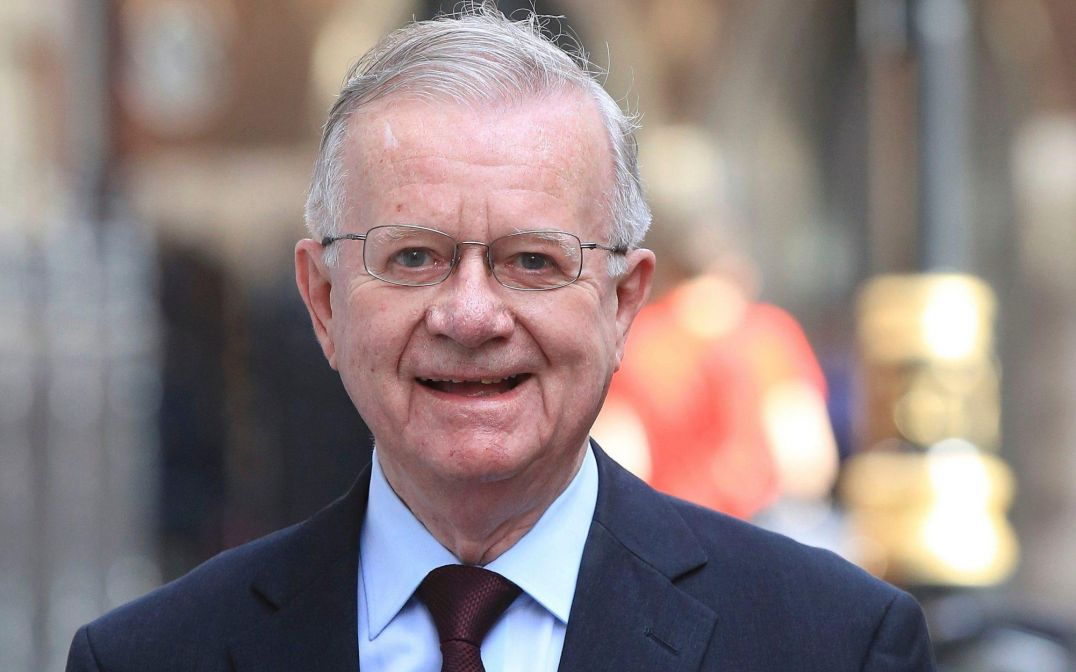 On Friday 27th May, St Margaret's Church, Westminster, was filled with the family, friends and former colleagues of Sir John Chilcot (Ha./Sc. 1952-57) for his memorial service. The address was delivered by Professor Sir David Cannadine, which he has shared for those who were unable to attend the service.

On the first occasion that I met Sir John Chilcot, I blush to recollect that I had not the remotest idea who he was. And the only excuse I can offer for such deplorable ignorance, by turns lame but not wholly implausible, is that in those far-off times, almost a quarter of a century ago, senior civil servants, going about their business discretely, disinterestedly and impartially, were less subjected to the harsh glare of media intrusiveness and political disparagement than they are perhaps, sometimes, and just occasionally today.

John and I had both been appointed to the Advisory Council of the Public Record Office, now the National Archives, and the placement for the quarterly meetings was rigidly alphabetical, which meant that four times a year, for the next six years, Cannadine and Chilcot sat next to each other, and I soon came to appreciate John’s warmth, goodness, decency, charm and humor, and to learn from other people that he was not only a person of great character and substance, but also one of the outstanding civil servants of his generation, or indeed of any other.

He loved language, literature and music; he was limitlessly curious about men and women; he was determined always to see the best in people; and he was vividly aware that promoting the public good required a particular combination of toughness and delicacy. At the Advisory Council, he was often tasked with looking into sensitive issues concerning the possible release of official documents that might cause considerable distress to people still living, and I cannot recall a single occasion when his recommendation was not accepted.

He never talked about himself, but he had been a civil service high-flyer from the very beginning, early on working in the Home Office with Roy Jenkins, Merlyn Rees and William Whitelaw.  Some thought he was lucky to serve with them; they were no less lucky to serve with him.  From the outset of his career, John cared passionately about sound decision-making, good policy work and the demanding but rewarding ethos of public service, he did every job he was given far better than anyone could reasonably be expected to have done, he possessed extraordinary powers of sustained application, and he was undoubtedly the best Permanent Secretary the Home Office never had.

Instead, the Northern Ireland Office beckoned, and at a uniquely propitious time.  By the 1990s, there was a growing sense of exhaustion in the province, and in ways that seem unimaginable today, there was also widespread political good will, not only in Belfast and London, but also in Dublin and Washington DC. But converting political will into a settlement with which all sides were willing and able to live, required exceptional tenacity, persistence and determination. And in the ensuing negotiations, John Chilcot, as Permanent Secretary, played an essential and pre-eminent part – tireless, resilient, unflappable, and with a tenacious determination to get all interested parties to work together.

The resulting Good Friday Agreement was one of the great creative achievements and collaborative accomplishments of British statecraft since the Second World War, which brought peace to Northern Ireland after the traumas, the terror and the tragedies of the troubles; and although it was not signed until John had retired, the Agreement was more his handiwork than anyone else’s. In doing so much to bring it about, he showed what public service was at its best, and what it could achieve. And how ironic it is that we salute the prime architect of that transformative agreement, which had seemed for a time so lasting, at the very time when it appears in serious, perhaps mortal, jeopardy.

John’s late-life activities were so many and so varied that they well bore out the familiar adage that retirement is truly a job for a younger person.  In addition to his work for the Public Record Office, he was (among other things) a staff counsellor to MI5 and MI6, President of the Police Federation, and a member of the Butler Review into weapons of mass destruction.  And in 2009, he was invited by Gordon Brown to chair the inquiry into the issues surrounding the decision by the British government to join with the Americans in invading Iraq in 2003.

For seven years, John led the investigation, undaunted by the scale of the task, unwearied by the time it took, undismayed by media criticism, and unintimidated by those in Whitehall and Washington DC who vainly sought to withhold essential documentation.  And its conclusions were damning: Saddam Hussein was not an urgent threat to British national interests; the intelligence regarding the existence of weapons of mass destruction had been presented with too much certainty; all peaceful options had not been exhausted; the legal basis by which the invasion was justified was far from satisfactory; and the war itself was unnecessary.

Although John was characteristically generous in saying how much his inquiry owed to the labours of his colleagues, it was fitting that it became known as the Chilcot Report.  Extending to six thousand pages in twelve volumes, it will always stand as one of the most important and authoritative state papers ever written. And in his unyielding determination to find out what really happened, and to get to the deep and dark bottom of things, John Chilcot would surely have won the admiration and acclaim of John Bunyan’s immortal creation, Mr Valiant-For-Truth.

There followed two other unique forms of recognition.  At a fringe event at the Edinburgh Festival in July 2016, the entire text of the Chilcot Report was read and declaimed verbatim over several weeks; and John was later elected an Honorary Fellow of the British Academy, for his scholarship as well as for his statesmanship -- an exceptionally rare accolade for a senior civil servant.  I don’t know which of these distinctions gave him the greater pleasure, but both were fitting and both were apt.

For half a century, John Chilcot was, to use a phrase that is regrettably unfashionable these days, but entirely appropriate in his case, a great servant of the British state and of the British public. Indeed, he saw no distinction between those actions and activities, or between those categories and constituencies.  He was also a great servant of the Irish people and of the Iraqi people too, and of no other civil servant of his generation could that additionally be said.

There is one further, final encomium that still awaits. For as we are gathered here today, to celebrate his life, to give thanks for his work, and to honor and cherish his memory, it is surely right and proper that we call to mind those incomparable words with which John Bunyan pronounced his epitaph on Mr Valiant-For-Truth – words that apply, with full force and in equal measure, to Sir John Chilcot himself: “So he passed over and all the trumpets sounded for him on the other side.”