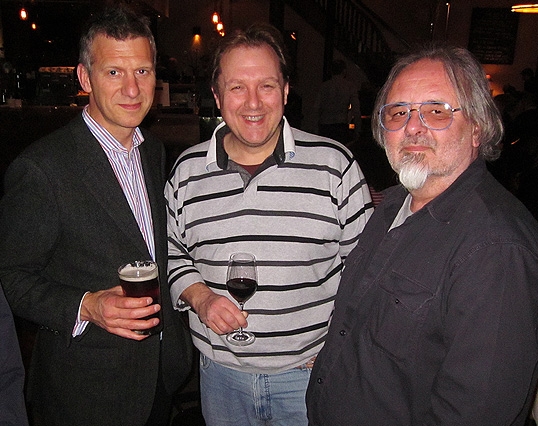 Some of these evenings atract a huge gathering, others a smaller one. This was the latter... but I cannot remember laughing so hard and so long!

For one thing the calibre of attendee was particularly high this evening; Graham Appleton (D. 1953-57) was on especially fine form as he regaled us with an endless stream of hysterical tales of derring do with the recently late Alan Mann (L. 1950-53) whose obituary I had only posted on this site earlier in the day. Alan sounded like and extraordinary man, and we all lamented the fact that we had not met him in person. We particularly enjoyed Graham's tales of deer hunting with Alan by helicopter in Scotland in the 70's...

It was great to meet Peter Kent (S. 1967-69) for the first time, and we were again sorry not to have yet met his father Denis (also an OB) in person; Peter had us in fits of giggles at his father's exploits at school - notably the disassembly bit by bit of an ageing Tiger Moth aircraft that graced the front quad in the late 60's... he has promised an introduction soon!