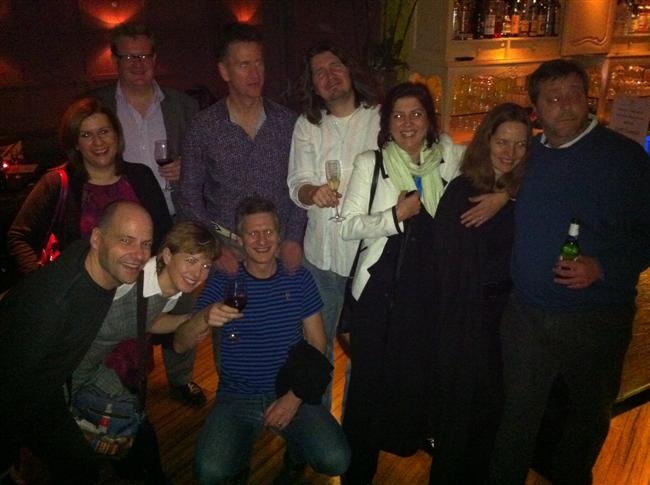 What an evening! Far and away the most successful and well attended London gathering we’ve had so far; several folk had come “out of the woodwork” for the first time in very many years!

I knew the evening was going to be a cracker as soon as I approached Duncan Watts’ (R. 1979-84) sensational new restaurant in Canary Wharf; the end of my quiet and uneventful journey was shattered by a booming yell of “BREMER!” – delivered from the shadows, as it turned out, by the itinerant James "Slug" Simpson (C. 1978-83). James had snuck outside to have a crafty cigarette – leaving a large, disparate and energetic crowd of OBs enjoying Duncan’s hospitality at the bar.

These events often throw up a small gathering of stalwarts and curious “newbies” - and while the London Drinks is always pleasant and worthwhile, this particular evening had already turned into a classic reunion of a wide variety of OBs from across the generations.

Best represented of these generations by far was the sizeable herd of 1983 and 1984 leavers – my lot! This had come as a complete surprise to me (I had only expected to see Adam Belson, Kevin O’Mahoney & Ben Stott (all R. 1979-84)), but Andy Bacon (C. 1978-83) had also corralled a gang of his contemporaries that I have very fond memories of. They included Nicky Trepte, Kirsten Clifton, Colette Lister, Cathy Terrill, Cathy Grant & Bridget MacDonald (all F. 1981-83) as well as the aforementioned “Slug”.

I had a truly wonderful evening, and it seemed everyone else did also – I cannot recommend these evenings highly enough, and can’t wait for the next one!