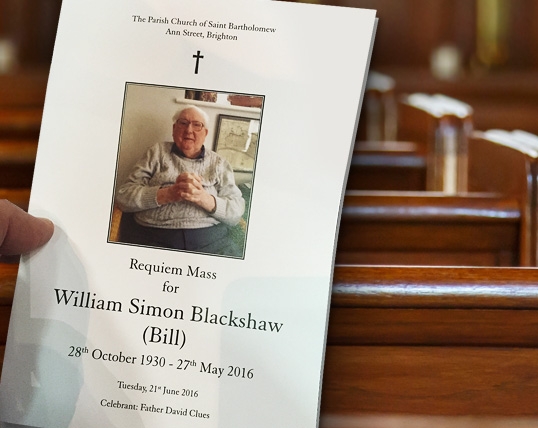 Bill went to prep school at Bilton Grange in Warwickshire, near Rugby. Still going strong and now coeducational. His affection for it was such that he became an industri-ous governor (as he did of 5 other schools in his career) and wrote a history of it in his retirement. And thence to Sherborne in Dorset. His cricket flourished here and he scored 550 runs in his last 2 seasons. He shone academically too (though as a Headmas-ter he claimed never to have had a science lesson in his life) and recalled reading Brown-ing together with his contemporary David Cornwell, who went on to write under the pen name John Le Carre.

And so to Hertford College Oxford as a scholar, where he read first Classical Mods and then Modern Languages. Fortuitously so, for it was after his first year at Oxford and his decision to switch to Modern Foreign Languages, that he spent the long vacation on the Loire to take a crash course in French in Tours, where one Elizabeth Evans happened to be signing on to same course. They sat next to each other in lectures and helped each other with their assignments. Elizabeth might say that her French was better than his; but this is not the place to imply any sort of competition in this or any other aspect of their relationship. A classic English education during the war and a very English ro-mance in its aftermath - that could have come out of a Rattigan play.

After Oxford, National Service with the Royal Navy, when he learnt Russian, and was assigned ‘special duties’. These involved playing cricket. And playing with considerable success. Opening the batting for the Royal Navy against the Army on 6 August 1955, Wisden reported Midshipmen Blackshaw and Brown roused the crowd at Lord’s with an opening partnership of 121 on the 2nd day. And, with that applause still ringing in his ears, to Repton in that September. After one year of being a bachelor schoolmaster, marriage to Eliza-beth in the August of 1956, almost 60 years ago. Bill’s career is very easy to assimilate: 16 years at Repton, with all those jobs of increasing responsibility (what we would now call management experience), Master i/c cricket, Head of Department, Housemaster (of the Orchard); and 16 years at Brighton as, he was proud to point out, the 15th and 2nd longest serving headmaster, after the famous or infamous Canon Dawson,

The Headmaster is the role with which most of us here were familiar with when thinking of Bill. And somehow it’s a role he never left behind. Running a school is a very differ-ent prospect to being an assistant master. Whilst your staff might fret over whether 3 pe-riods of English in the fourth form is really quite enough, or who on earth is going to be scrum half for the U15s now that Wittering has broken his collar bone - the bottom line of the HM’s role is to run a business, which involves keeping the numbers up and the fees rolling in so as to able to pay the staff – and to keep the governors happy. A tall or-der in the modern era with more layers of management to prepare you but 45 years ago the leap to Chief Executive was a considerable one. Bill managed this by a combination of consistent hard work and by having an unwavering sense of what he wanted to achieve in his school. The buildings, and the raising of funds for them; the introduction of girls in 1973 into a male culture, amidst carping from some, who seemed to regard girls as an alien and frightening species; the establishment of music, art and drama as more of a force in the school (not unconnected with the previous point); and the ongo-ing dialogues with Primary School heads about sending their bright children to us under the assisted places scheme in order to raise academic standards. And whilst doing all of these strategic things there was the need to deal with all those myriad things that happen to happen when you are dealing with a staff common room of bright and sometimes sensitive people and an ever-increasing pupil body of teenagers - and ever more de-manding parents. Yes, it was hard work! He approached it with great resolve. Sometimes with toughness; always with an understanding of the greater good.

A large part of his success was that he developed and sustained a true sense of commu-nity as he and Elizabeth had experienced in the country school boarding environment of Repton. The house was the focus of one social gathering after another (which Bill most-ly remembered to tell Elizabeth about beforehand) and he created links with the town - he was a trustee of the Brighton Youth Orchestra, on the committee of the burgeoning Brighton Festival and well-known to the Brighton MPs and local councillors. He was in-creasingly prominent in Sussex Masonry, rising to become Assistant Provincial Grand Master. He brought the outside cultural world into the school too, with Festival exhibi-tions such as a sculpture exhibition in the front quad and Picasso and the Theatre in the Great Hall in May 1982. And just 2 years earlier he himself directed a memorable pro-duction of Chekhov’s The Cherry Orchard. A busy and active life.

It was all the more frustrating for him when a back complaint in 1980 confined him to bed in term time. But business went on as usual: dictation was taken at the bedside; some Cherry Orchard rehearsals took place with the director flat on his back. And I re-member clearly taking a somewhat bemused lady who was a candidate for the School house matron’s job into the house for her interview, where, I explained to her, the headmaster was laid up. As she stepped gingerly over the tiger skin rug on the landing before entering the master bedroom where Bill was languishing, she must perhaps have been casting in her mind what manner of establishment this was which she was seeking employment in. She did get the job.

An active life but a contemplative one too. (L’Allegro and Il Penseroso.) What do you do to relax Mr Blackshaw? He might have been asked at interview. These days at inter-views ‘I go to the gym’ is the eager reply. Bill certainly was an early visitor to the swim-ming pool each morning, but it was in his painting, I think, that he sought refuge from the cares and concerns of this busy life. These watercolours form an extraordinary col-lege archive (unique in any school’s history I would have thought). And they also speak of a most sensitive creator. The skies, the shadows, the moods of the seasons are cap-tured beautifully. Bill and Elizabeth are quite a duo: he the landscape artist, she the por-trait painter.

And so naturally to the spiritual dimension. His personal faith, nurtured in his family and throughout his schooldays, never wavered - even when it was most severely tested. Some of us will remember the grim time in November 1996, when just a day or so after Ben died, Bill steeled himself to come to an evening organ recital in chapel to commem-orate the re-ordering of the organ. Quite a big event, planned for a long time, with Alan Wicks, organist at Canterbury Cathedral - and one that Bill, characteristically, felt he could not and should not miss. When those gathered there saw him coming in take his stall there was a huge and palpable sense of sympathy and support for him - a communi-ty reaching out to him - which I hope buoyed him and all the family.

The chapel was indeed his space: he took his role as ordinary of the chapel very seriously (HMs had also been chaplains from 1919) and invested the services he took with a sim-ple dignity and succinct explanations of the text under consideration - always being aware that first thing in the morning the minds of his target audience were not necessari-ly focussed entirely on the reading in hand. His Sunday sermons, written out in a school exercise book in that very fair hand that he retained to the end, are finely wrought dis-courses (and here we perhaps see the influence of his grandfather) on Pride, Money, Remembrance and that most difficult of challenges, what Trinity Sunday is all about. Of-ten the travails of his hapless L5 French set and their total inability to grasp a basic rule of grammar were recalled to emphasise a point. But here was guidance for us all on how we can lead better lives, be kinder, more thoughtful to each other. And the congrega-tion here at St Bart’s scarcely need reminding how integral he became to the ordering of the services here.

How clearly we can all recall and how much we will miss his physical presence:

Bill died suddenly and very peacefully and painlessly in his sleep in his chair on the even-ing of Friday 26 May. The start of half term; the end of lessons for many schoolboys and girls, and the start of exams. And it is that very peacefulness that I hope Elizabeth, Jim-my, Ellie and Ben, who left us early, can seek solace in. The career that began with read-ing Browning on the playing fields at Sherborne, then meeting Elizabeth in the queue to sign up for the French course in Tours, then playing cricket at Lord’s before beginning his vocation of schoolmastering, ended so quietly at home in domestic contentment.

We will let Shakespeare have the final word.

As Prospero bade farewell to his art and his world at the end of The Tempest, so we bid farewell to Bill as he takes his leave of his world.

Our revels now are ended. These our actors,

As I foretold you, were all spirits and
Are melted into air, into thin air:
And, like the baseless fabric of this vision,
The cloud-capp'd towers, the gorgeous palaces,
The solemn temples, the great globe itself,
Yea, all which it inherit, shall dissolve
And, like this insubstantial pageant faded,
Leave not a rack behind. We are such stuff
As dreams are made on, and our little life
Is rounded with a sleep.