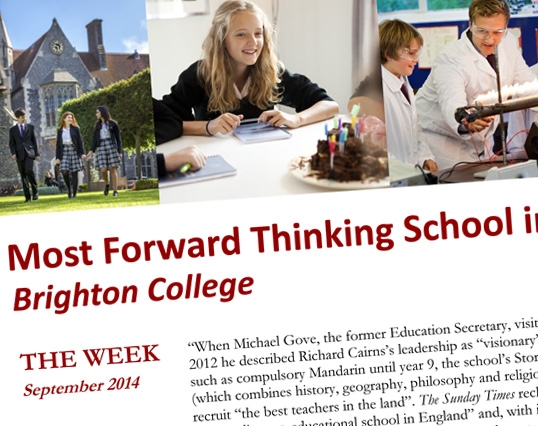 Brighton College is the "Most Forward Thinking School in Britain"

A terrific headline in "The Week" this month - we're delighted & proud to be named the "Most Forward Thinking School in Britain".

"When Michael Gove, the former Education Secretary, visited Brighton College in 2012 he described Richard Cairns's leadership as "visionary", pointing to innovations such as compulsory Mandarin until year 9, the school's Story of our Land course (which combines history, geography, philosophy and religion) and his mission to recruit "the best teachers in the land".

The Sunday Times reckons Brighton College is "the leading co-educational school in England" and, with its increasingly sparkly results, it's perhaps not surprising that applications have trebled in recent years."