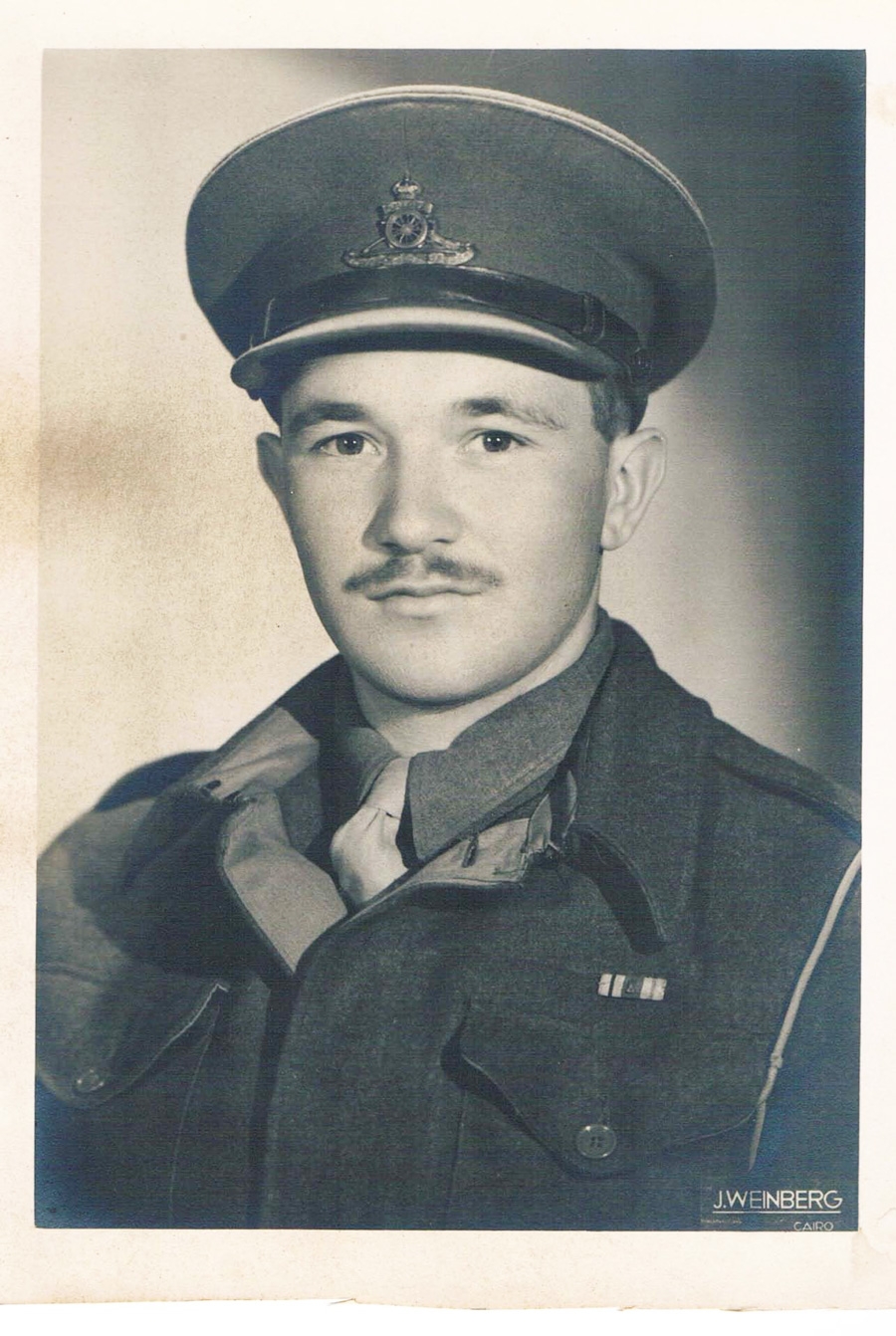 Tony Eeles (L. 1934-39) enjoyed a reputation amongst those who served with him in battle as a brave and selfless leader. He was an enormously talented forward observation officer who used his skills to great effect in both the Second World War and the Korean War. Recommended for the MC on three occasions, he was an irrepressible young officer with a thirst for combat and a remarkably considerate manner towards his subordinates.

Major Tony Eeles (L. 1934-39)  was born in Brighton on 7th February 1921, the elder son of Lt Col Aubrey Eeles DSO. After schooling at Brighton College he followed his father into the Gunners, passing in to the Royal Military Academy for the final, truncated course at Woolwich in August 1939. His course of Gentlemen Cadets stayed there only six days before it was broken up, and he was sent to 122 OCTU at Larkhill for the remainder of his training. In February 1940 he was commissioned and posted to the Ayrshire Yeomanry where he assisted in the regiment’s conversion from horsed cavalry to artillery (as 151 Field Regiment). The Yeomanry officers trained and partied hard. In later years Tony recalled with much joy the mounted sword drill and cavalry charges along the beaches in Scotland. He also remembered with much less glee the exorbitant mess bills raised in a Yeomanry Regiment at the time!

In January 1942 he joined 172 Field Regiment as a captain and in early 1942 he landed with the regiment in Tunisia on 16th January 1943 as part of 128 Infantry Brigade (Hampshires) in 46 Infantry Division. He received his baptism of fire in Hants Gap, Beja, where one of the regiment’s batteries was overrun by a German panzer division as it bought time for the remainder of the Division to stabilise the front. The German attack failed as a result of the battery’s gallant action - quite why 155 Battery was not awarded the honour title Sidi Nzir was an enduring puzzle to him.

On 9th September 1943 he landed with the first waves of assaulting troops at Salerno in Italy, again supporting the Hampshire Brigade. Whilst in combat in Italy he survived several close calls: his Battery Commander was killed by a sniper as he received verbal orders from him on a roadside, and on another occasion an enemy mortar round landed beside him in his trench but failed to detonate. When his battery commander was killed, Tony was elevated to command 153 Battery, and he commanded it for much of the remainder of the war, fighting it up through Italy and into Austria. He also saw service in Greece towards the end of the war. During his service in North Africa and Italy he was put in for the Military Cross three times (two immediate award recommendations). His final recommendation noted that throughout the campaign in North Africa and in the landing and subsequent fighting in Italy he “conducted himself with very great courage and tenacity of purpose”. One of the immediate recommendations was made after he had remained in a forward position which was infiltrated by German soldiers in order to bring down accurate artillery fire on them (and himself). The fire proved effective and the Germans withdrew allowing the position to be re-occupied by the supported infantry. Modesty meant that his favourite incident to recount to his children and grandchildren was altogether more farcical. Ordered forward to reconnoitre and occupy an observation post he found a farmhouse which seemed perfect, offering excellent coverage and with a covered approach. Leaving his party some way short of the building, he moved forward, entered through the front door and proceeded upstairs. Upon entering the bedroom in which he planned to position the OP he found himself face to face with a German officer. Both parties reached for their pistols and fired wildly inaccurate rounds at each other before cutting their losses and hurriedly withdrawing, Tony back down the staircase and the German directly out of the first floor window!

After the war he undertook flying training on Austers but he was clearly too much for his instructors to handle. Having survived numerous close shaves during the Second World War he did not appreciate the restrictions of peace time training – a report noted that he was “over-confident to a dangerous degree”! In March 1948 he was selected to be ADC to GOC in C Western Command, serving Lt Gen Sir Frank Simpson (Montgomery’s old Chief of Staff) for two years, and well enough for him to remain a life long friend (despite his being a Sapper!). This tour included a spell at the War Crimes Court in Germany. After a short spell as Staff Captain Q at 18 Training Brigade RA in Oswestry, he wangled a posting to Korea in September 1950 where he served in the FMA headquarters initially, before joining 170 Independent Mortar Battery RA with which he fought on the Imjin. Here he supported the Northumberland Fusiliers with whom he formed a strong bond. After a year in Korea the battery moved to Hong Kong where he was based in Sek Kong and Stanley. In early 1953 he commenced staff training at the Staff College in Camberley (where in his spare time he started carving in wood, producing a Staff College crest as his first trial piece) and he then moved onto the staff of BRA Scottish Command in Edinburgh. Battery command of The Battleaxe Company (1956-57) followed, during which he prepared them for the abortive Suez Campaign. He served for a brief period in the War Office (MI7) before leaving the Army in April 1958 after the death of his first wife, Betty.

He claimed that he then embarked on a series of enterprises, all of which he had been warned to steer well clear of on his resettlement course; market gardens, game farms and importing wine from the continent. He established the highly successful Wessex Wines Company before settling very happily into the post of office manager for the solicitors Moore and Blatch where he oversaw the firm’s administration in branches spread across Hampshire for many years. Through this period, and into retirement, he honed his carving skills, producing an extraordinary number and variety of high grade carvings which he gave freely to family and friends. He also developed into an outstanding gardener, producing a series of stunning gardens for his family to enjoy.

His first wife, Betty, tragically died in 1957, but he enjoyed a long and exceptionally happy marriage of over 50 years with his second wife, Valerie, who survives him. He is also survived by his three sons, Simon, Philip and Nicholas. His youngest son is the current Director Royal Artillery.

Tony Eeles was a fine officer, courageous and determined an outstanding forward observer (still one of the most dangerous of jobs in the Army) and an inspirational leader. Perhaps it is best to leave the final words to one of his soldiers, Geoffrey Smith, who fought with him through North Africa and Italy: ‘I admired him for his wonderful qualities as a brave, intelligent, quick-witted leader of men. I treasured his company, his coolness in danger, his ability to cope with any situation. He deserved and received the total respect of his men.’

One can hope for no greater accolade from one’s soldiers.