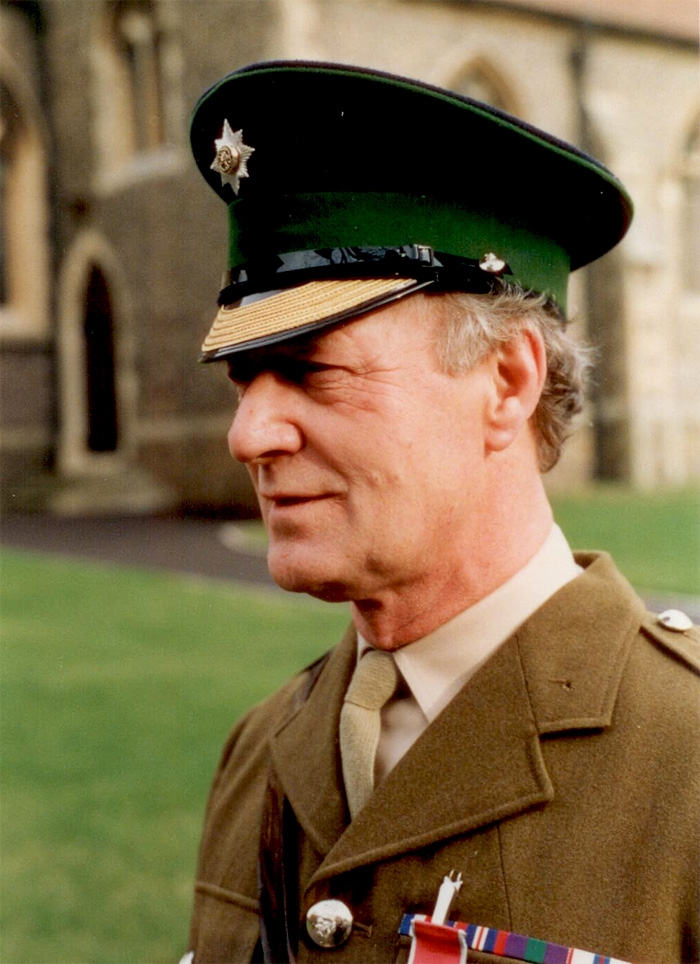 His 22 years in the Irish Guards, culminating in his appointment as RSM and his final posting to commanding Army Youth Teams in Northern Ireland, made him the ideal candidate to become the College CCF’s S.S.I when the post became vacant in 1967 and to revivify a still compulsory cadet corps, which had recently suffered from some of the social turbulence associated with that time. Chris soon restored a pride in the Corps, and impeccable drill and turnout, especially among the Cadre, became objects of admiration. It was therefore quite fitting and a mark of the high reputation that Chris had with the powers that be in the Ministry of Defence that the College Cadet Force was chosen to represent the more than 200 CCFs in the UK at the Queen’s Silver Jubilee Review of her Reserve and Cadet Forces at (the old) Wembley Stadium on June 30th 1997. In recognition of this and his services to youth, Chris was awarded the Jubilee Medal and, later, the B.E.M, both presented to him on memorable occasions at the school.

Chris came into his own at Camp, both of the annual and adventurous training variety, when he was able to persuade cadets to achieve more than they thought possible and demonstrate that military discipline and training did not exclude fun and enjoyment. I still have recollections of how his ambush exercises would be based on his recollections of his own tales of derring-do from his active service in Cyprus, larded with a good quota of his inimitable Irish blarney. While not a man for service bureaucracy, Chris certainly knew how the system worked, and it was a point of honour for him that the contingent should always leave camp with if not more, then at least better, kit and equipment than when it arrived!

One cannot do justice to the memory of Chris O’Connell without recalling the wider pastoral role he played within the College. Beneath his blarney, irrepressible humour and his aspect of the parade ground martinet, there lay the sympathetic and understanding ear, especially to the troubled and unhappy soul, whether boy, girl or member of staff. Indeed, if there had not existed a close and trusting friendship between him and a young LVth former, one of the Day Houses might have been blown up! The boy had found a small WWII bomb on the Downs one weekend and took it to Chris with great pride on Monday morning; Chris summoned the bomb squad, and the bomb was duly exploded on the Home Ground, albeit rather like a damp squib. The discoverer of the bomb was one of the very many boys (and later girls) who needed someone other than his parents or house staff as a listening board and encourager. Chris sometimes acted as a father figure, and there was one head boy, who having lost his own father, looked upon Chris as such and under whose influence rose to having a distinguished, if ‘underground’ military career in the Falklands and the First Iraq War. Indeed, there are currently OBs serving in all branches of the armed service who owe much to Chris’ mentoring and tutelage, and the three Sandhurst Swords of Honour awarded to OBs are a testament to this.

Shortly before he died in January of this year and when not in the best of health, Chris returned to visit the College and his beloved armoury and seek out some familiar faces. Perhaps things and people were not as he could recall, but his memory deserves a place in the annals of the College, which he served in so many ways with distinction and humour for so long.

I am grateful to my former colleagues, Christopher Alderson, Bill Blackshaw, Martin Green, and John Page for sharing their memories of Chris O’Connell with me.