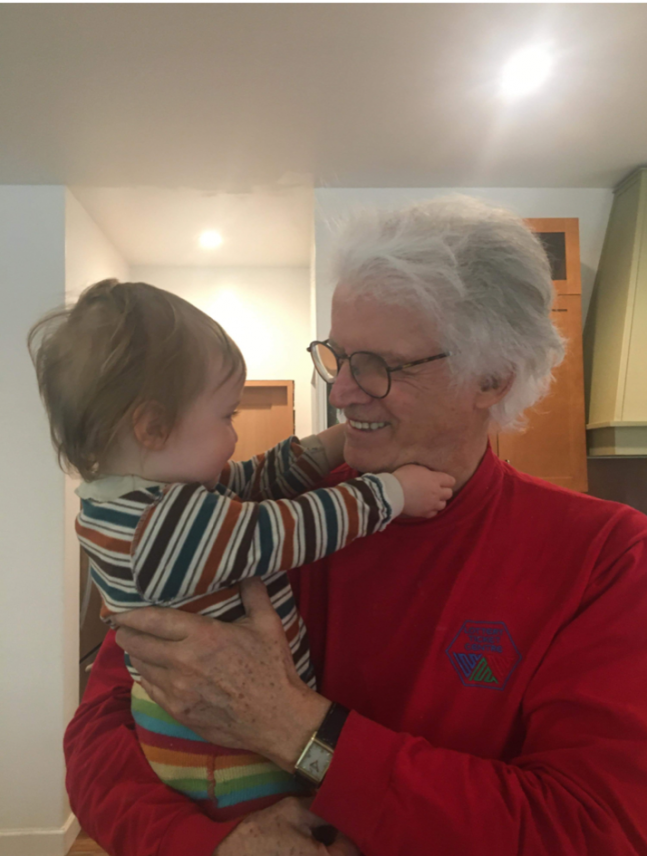 Rowland will be lovingly remembered by all his family, including his wife Emily, his children Rosa and Henry, his granddaughter Zara and his grandsons Jasper and Sequoia (pictured with his Grandfather in this lovely picture).

Rowland's brother, Gerald, has written this piece looking back over his brother's life.

"My brother Rowland Morgan, who has died aged 75, was known to many Independent on Sunday and Guardian readers in the 1990s for his remarkable weekly columns, Index in the former, Digitations in the latter. They were collected in two books, Planet Gauge and Digitations (London, 1993 and 1996). The cover of the second described it, tongue in cheek, as ‘Mind-Blowing Number-Crunchings from the Cutting Edge of Eco-Paranoia’. His statistics, gathered seemingly at random but well-sourced and themed, drew praise from Kingsley and Martin Amis. They reflected Rowland’s enormous curiosity on controversial subjects from warfare to sex and everything in between. He produced a flood of books of statistics, historical stories and puzzles between 1992 and 2005 - at least nine of which were translated into French and another into Estonian. Rowland had a deep pioneering concern about the fate of Planet Earth, which included working for the Green Party for a while.

Rowland was born on 7 July 1945 in Brighton, to Tudor and Dylys Morgan, and educated at Brighton College; Selwyn College, Cambridge, where he read English and French and Bangor University (then U.C.N.W. Bangor). In 1978 he emigrated to Canada with his first wife, but the couple soon parted and Rowland developed his career as a journalist with the Vancouver Sun and editing the Georgia Straight independent paper. He met the sculptor Emily Disher, and they developed a successful series of Then and Now photo volumes about British Columbia, Vancouver, San Francisco, Victoria B.C. and Seattle, published between 1977 and 1979 under his baptismal name Roland. He added the ‘w’ as a gesture to his Welsh roots.

Rowland and Emily moved to the south of France in 1980 where they married and set about restoring ancient houses in and around Uzès, living in an ancient farmhouse where they welcomed visitors warmly. There followed more than ten years living in Twickenham and on Eel Pie Island. As well as his journalism and rich involvement in digital media development, he and Emily ran the 'World One-Day Novel Cup' between 1993 and 1997, which gave first breaks to Jon Ronson, Pat Gray and Maggie Hamand, among others.

Yet Canada’s call was powerful and the couple returned to Vancouver in 2003, now the parents of a daughter, Rosa, and a son, Henry. Rowland turned his attention to the calamity of 9/11, producing two books in collaboration with Ian Henshall: 9/11 Revealed (2005) and Flight 93 Revealed (1996). The books were shunned by the U.S. media, but they asked pertinent questions which are not easily answered.

Thenceforward Rowland enjoyed life in Cowichan Bay, Vancouver Island, with Emily. At first, life was good, especially after he acquired his yacht, Calypso. He became a grandfather of three little ones, whose company delighted him. But his health became fragile, and he died on 21 April 2021 after a major heart attack. He is survived by Emily, his children Rosa and Henry, his granddaughter Zara and grandsons Jasper and Sequoia."