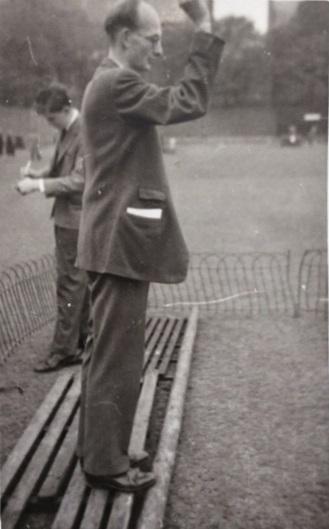 We are sad to announce the death, on 4th December 2020, of Nigel Jaques, who taught Classics and English at the College from September 1958 until January 1962.

The son of an Eton housemaster, he was an Etonian himself, and on completing his degree at Trinity College, Oxford was offered a job by the then Eton Headmaster Robert Birley. But a post was not immediately available, so Bill Stewart snapped up this promising young schoolmaster for the interim period, and Brighton benefited from his services for two and a half years.

Though only a member of the Common Room for this short time (he was of the same period as the long-serving Norman Frith, Dick Crossley-Holland and Peter Perfect) he retained a lively interest in the place, returning for Remembrance services, and notably the Sesquicentenary Common Room Dinner in 1995, attended by some 150 present and former members of staff.

A few years ago he bequeathed to the College archives a cache of papers from his time here, a vivid snapshot of life at Brighton 60 years ago. A meticulously kept mark book was accompanied by programmes of various productions in which he had played the clarinet under the musical direction of Malcolm McKelvey - Pirates of Penzance, HMS Pinafore and Andre Obey’s Noah; a note of thanks from Jill Stewart for his help with some fundraising event, another from the secretary of the Humanist Society, thanking him for speaking at a meeting; and, curiously, a letter written on flimsy airmail paper from a hotel in Istanbul from Sir Alan Pugh (the Chairman of the College) beginning ‘Dear Jaques’ and containing a piece for the Brightonian:‘If you are able to cruise the Mediterranean, take an Italian boat’ he writes to this young man of presumably modest means.

After Brighton, Nigel spent the remainder of his career at Eton, becoming a long-serving housemaster and influential figure in the lives of many. He visited Italy regularly and had a house full of paintings, prints and books. Needless to say, he was forever receiving invitations from former pupils and their families, who had so easily and naturally become friends. He was a dedicated schoolmaster who will be recalled with affection and admiration by those many Etonians, as by those Brightonians whose names feature in that 1960s mark book.

When I saw in my Daily Telegraph on 18th December that Nigel Jaques had died, I realised that it was not only that his Christmas card was late this year, he too was late. We had exchanged such cards for many years, ever since we had sent our son Nathaniel to Nigel at Eton in his last year as a housemaster. Nat and I spanned most of his career and so I wanted to contribute my own memories of him. As Max Boyce, the Welsh comedian would say “I know -`Cos I was there!”

Nigel Jaques came to Brighton College in September 1958. He was still only 22 and after four years of reading classics at Trinity College, Oxford was unable to take up his two years of National Service which had been deferred by his entrance to Oxford because National Service had meanwhile been abolished. I was nearly 19 and had a Commoner’s place at New College, Oxford to read English but it was deferred for a year because of the bulge of applicants between those coming back from two years of National Service and us who were too young to be called up. Michaelmas term 1958 saw me, therefore, in my 4th year in the Sixth form endeavouring to win an Open Award at Oxford under the tutelage of Geoffrey Lees, as Head of House in School House to which Nigel Jaques was appointed as House Tutor. Our regular tutor, Norman Frith, was standing in for a term as Housemaster of Durnford, then boys boarding house 150 yards up Eastern Road, while Reg ‘Jock’ Henderson, its incumbent Housemaster was undergoing serious heart surgery.

Jaques greeted me, “Ah, Cockburn (no Christian names then) I understand you are the House Captain. You'll have to show me the ropes.” “Yes, Sir,” I replied, “but we call them Heads of House!” I still think that was a good start to our relationship! They are to this day, House Captains at Eton. Jaques was accommodated at Saint George's lodge on the corner of College Place next door to the Funeral Directors which was my father’s business. As next-door neighbours out of school, we became good friends, my mother calling him Hattie to the day she died.

By the Hilary term I had left with, thanks to Geoff Lees, an Open Exhibition at University College, Oxford and Frith was back in School House with Jaques as Assistant House Tutor.  This continued for the Trinity Term and Michaelmas 1959. In Hilary 1960 Jaques was appointed House Tutor to the new Housemaster John Rolland in Chichester House, (boys boarding), following the departure of longstanding Housemaster Mr W.H.Lloyd to head up a teacher training college. After five terms, Jaques moved as Tutor to Hampden House for his last term Michaelmas 1961. He left at Christmas and started back at his old school Eton in January 1962, where he thrived until retirement in 1998.