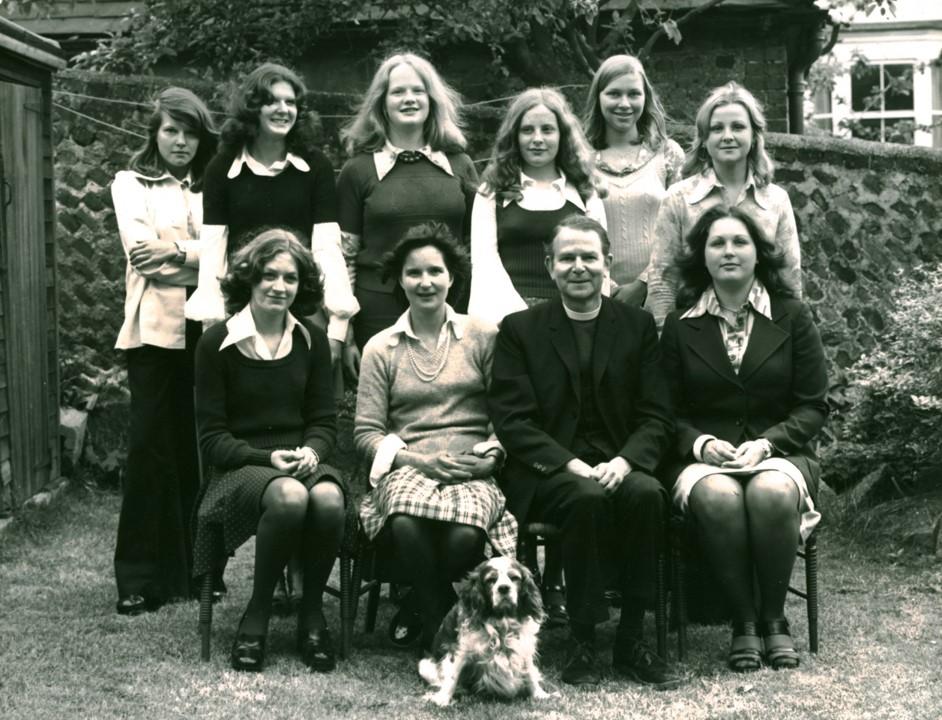 We are sad to announce the Geraldine Hamilton, housemistress between 1973 and 1977, has died at the age of 87.

One of the most abiding images of the history of the college in the 70s is the photograph of ‘The Girls’ House’ in 1974. It was only in 1977 that the name Fenwick was conferred upon them, in honour of Dot Fenwick the long-standing former college matron. Until then, girls were merely designated by a small g in the Roll. Sitting in the centre of the front row, alongside her husband, the Rev Dr Peter Hamilton, the then chaplain, is Geraldine Hamilton, with her Cavalier King Charles spaniel at her feet.

She had a demanding job in those early days of co-education, jollying the girls along, helping them to become integrated into the male-dominated world in which they found themselves, particularly negotiating the challenge of walking as a group into supper in the dining hall, congratulating them on their academic achievements, consoling them when they were upset over some broken attachment or other; and sometimes standing up for them with a member of staff who was perhaps a stranger to what we now know as equal opportunities. She was indeed a mother figure to those pioneering girls and put to good use her experiences with her own three daughters.

If the girls’ only connection with some aspects of school life was tangential in those days ( their only association with games was washing the 1st XV’s rugby kit before a Saturday fixture) under Geraldine their house life in 26 Walpole Road became more and more structured as their role in the school became recognised and applauded, through music, art, and their colourful and cheerful presence around the school. Geraldine was a significant figure in their lives for 4 years and merits a place in the college’s modern history. In 1977 Peter was appointed to a parish and they moved to Frant on the Sussex/Kent border. If any evidence were required of the affection in which Geraldine was held, it came in the shrieks of delight and gales of laughter from her former charges when she met them on returning to OB dinners.

Elizabeth Blackshaw writes:
It is sad to read of the death of Geraldine Hamilton. Geraldine with her husband Peter, the chaplain of Brighton College, welcomed Bill and me to the College in 1971. Geraldine was a most supportive chaplain’s wife, totally loyal to the School, the School Chapel, to the wider community as well as to Peter himself. We had many entertaining lunches in the Headmaster’s House with the Hamiltons following Sunday Services to which Peter had invited interesting and distinguished speakers, mainly from the ranks of the clergy.

Soon afterwards Bill set up the first sixth form girls boarding house, and with no personal experience himself of coping with girl pupils, he was delighted and relieved when Geraldine agreed to become the first Housemistress. Geraldine was highly qualified for the role, from her own experience of boarding school education and also as the mother of three daughters. The house in Walpole Road was equipped and furnished on a shoestring. It accommodated only eight girls. But it was a homely environment and the girls there flourished under the inspirational care provided by Geraldine, always with the backing of Peter, and after the first exciting introduction integrated extremely well into the life of a boys' school. I am sure Geraldine will be remembered with deep respect, admiration and affection by the girls under her care, as well as by myself and other former members of the Brighton College Staff.