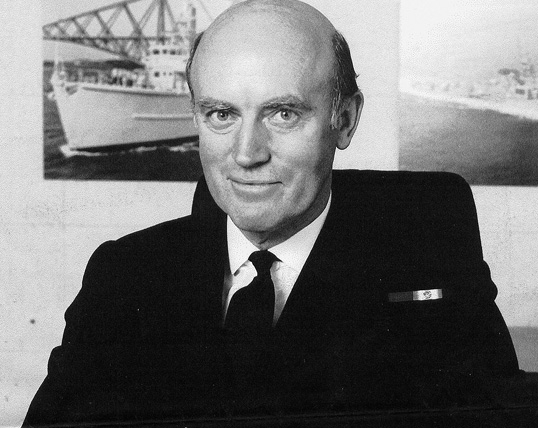 We are sad to report the death of Peter Dingemans, who has died in hospital at the age of 80, having contracted pneumonia. His naval career is aptly summed up in the title his book: 'My Incredible Journey: from Cadet to Commander'. He entered the Royal Navy a year after leaving school and from the outset proved to be an able tactician, notably as an anti-submarine specialist. He had four commands in his career, the peak of which came in 1982 when he commanded with such distinction HMS Intrepid in the South Atlantic.

His connection with Brighton spanned some 60 years. As a schoolboy he was a member of the unbeaten rugby XV of 1951 (only to lose all matches the following year, he ruefully admitted when interviewed in 2012). He served a term as President of the OBA from 95-97 and was on the Board of Governors from 2001-2006. He was also a scholarship trustee. Beyond the college, he served on the Sussex University Council and spent 10 years with Slaughter and May as Head of Payroll, Benefits and Insurances. His wisdom and experience of these diverse worlds he brought to meetings was invaluable.

A tall and elegant figure, he was quietly modest about his achievements. Rather than impress an audience with nautical anecdotes, he preferred to spend time working for local charities or with Faith and their three sons. Asked in that 2012 interview what would most improve the quality of his life, he replied 'a cure for Parkinsons'. He nevertheless bore this cruel affliction with the same fortitude that he displayed in his active life. We send our sympathy to his family.

Dingemans had commanded Intrepid in 1980 and 1981 when he left her in dry dock for disposal under the “Nott” Defence review. After the Argentines invaded the Falklands in early 1982, a British task force sailed from Britain on April 5 and on the same day Dingemans was about to start a new shore job, when he was summoned to resume his command.
Intrepid had fallen into a poor state, slated for breaking-up or even – it was rumoured – for sale to Argentina. “A ship in dockyard hands,” wrote Dingemans, “resembles a filleted fish. You’re left with the bare bones and a dismembered body.”
Ten days later, thanks to the extraordinary effort of Dingemans and his second-in-command, Bryan Telfer, every one of the original crew of 550, bar two officers and 20 men, had been recalled from Britain and abroad, and Intrepid sailed – stored, armed and fuelled for war. This was only possible because of the team spirit which Dingemans had forged in his previous two years in command. For his people, returning to their ship was like a homecoming, seeing familiar, trusted faces with whom they had lived and trained together.
Morale of the highest level was recreated at once, based on mutual trust between colleagues, and, Dingemans wrote, “a cause which we believed in, namely the freedom of the individual, and most importantly knowing that our country was behind us”.
With Royal Marines embarked, Intrepid sailed on April 26, escorting the North Sea ferry Norland with men of 2 Para Bn on board. For the next nine days the ships practised, by day and by night, action stations, defence stations, damage-control drills and abandon-ship drills. On May 8 Intrepid caught up the other amphibious ships and merchant shipping at Ascension Island and sailed south towards the Falkland Islands, carrying some 600 people more than her approved wartime load.
Before first light on May 21 Dingemans’s Intrepid followed her sister ship Fearless into San Carlos Water, where ships of the amphibious task group, under the command of the Commodore, Amphibious Warfare, Commodore Michael Clapp, landed some 4,000 men, their vehicles and equipment. By the next day the British had established a secure beachhead from which to recapture the Falklands. San Carlos was rechristened “bomb ally” as the Argentines subjected it to repeated air attack. Over the next several weeks Intrepid took part successfully in most of the amphibious aspects of the war, and, as one of the last ships to join, stayed on as floating hotel, hospital and supply base and helped to deal with the remaining Argentine forces after victory on June 14.
The citation for Dingemans’s DSO highlighted the fact that he had taken the closest personal charge of his ship’s company and handled his ship magnificently, as well as providing every possible assistance to frigates, aircraft and landing ships: “His example, energy and leadership were of the highest order.”
Peter George Valentin Dingemans was born at Steyning, West Sussex, where his father was a GP, and was educated at Brighton College. His love of the sea started in the Sea Scouts. He entered Dartmouth in 1953, within a few weeks finding himself in a street-lining party for the Coronation.
At Dartmouth he did well, but it was his younger brother, Norman, who later won the Queen’s Sword. Peter’s training included a circumnavigation of South America in the cruiser Superb and a visit to the Falkland Islands, which he would see again 28 years later. Peter Dingemans specialised in torpedo anti-submarine warfare while Norman became a submariner.
Peter’s career followed a conventional path through the 1960s and 1970s, alternating command of the minesweeper Maxton in 1967, the frigates Berwick and Lowestoft (1973–74), and the Fishery Protection Squadron (1977–78), with staff courses and appointments in the MoD.
In early 1982 he had been appointed to a job in PR, but the Falklands conflict changed his career. Instead, with his recent experience, he became Commodore, Amphibious Warfare (1983–85), and on promotion to admiral he was Flag Officer Gibraltar (1985–87) and then chief of staff to the Commander-in-Chief Fleet (1987–90), at which point he was made CB.
On leaving the Navy, Dingemans found ready employment in the City with Argosy Asset Management and then Ivory and Sime, before becoming head of remuneration at Slaughter and May. He also took on a number of charity positions, and, in 1984, became a liveryman of the Coachmakers and Coach Harness Makers.
Dingemans was noted for his calmness in a crisis. He wrote an autobiography, My Incredible Journey (2013), and was motivated by his strong Christian conviction, which he described as the handrail of his life.
He married Faith Bristow in 1961, who survives him with their three sons, one of whom is the Hon Mr Justice Dingemans.

The London Gazette reported on 8 October 1982:

"HMS INTREPID, under the command of Captain Dingemans, was manned up and sailed at very short notice to join the Amphibious Force already on its way to the Falkland Islands. Captain Dingemans achieved all this in a remarkably short time and joined the main Amphibious Forces at Ascension Island and stayed as a vital part of it, with the exception of one brief respite, until the fall of Port Stanley. During the time of the landings, when the Amphibious Force was is San Carlos Water, the ship came repeatedly under air attack. HMS INTREPID was, on several occasions, employed on nightly escorted runs to insert or recover landing craft when the threat of attack from airborne Exocet and surface craft was ever present. Throughout this period, Captain Dingemans took the closest personal charge of his Ship's Company, fought his ship magnificently, as well as providing every possible assistance to Frigates, aircraft and landing ships. His example, energy and leadership were of the highest order."