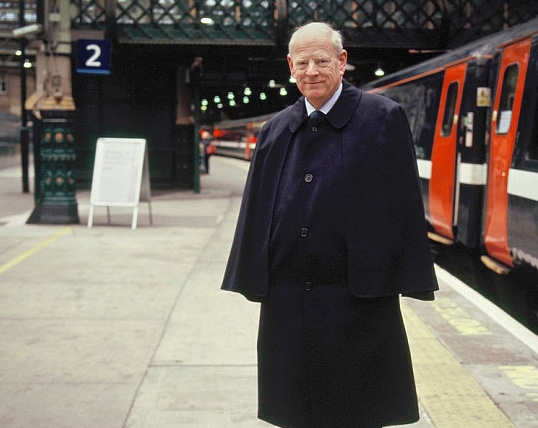 He wrote several definitive books – notably Dow’s Dictionary of Railway Quotations (2006) – and was a driving force behind the construction against the odds of the new-build main line steam locomotive Tornado.

Dow grew up in a railway home and throughout his life championed the London & North Eastern Railway – for whom his father George Dow had been publicity officer – and all its works. Convinced that the originator of the first diagrammatic railway map was not the London Underground’s Harry Beck but his own father, he argued his case in a book characteristically titled Telling the Passenger Where to Get Off (2005).

Before joining the NRM, Dow had never worked for the railways. Trained as a chartered secretary, he had been a key figure in the development and marketing of the Pegasus engine that powered the Harrier jump-jet.

Perhaps his greatest coup, when head of Rolls-Royce’s North American business, was to have a US Marines Harrier land amid bewildered onlookers in the car park of Dulles Airport, Washington. In retirement he wrote Pegasus: Heart of the Harrier (2009) and was an outspoken critic of the Coalition’s decision to retire the aircraft on economy grounds.

Dow the author drew on his own large railway library, and the archive of photographs inherited from his father. But his books gained their unique flavour from the insights he had built up during a lifetime as an enthusiast.

His thoroughness and his wit showed through in the 3,400 entries in Dow’s Dictionary. Throughout its 384 pages, bons mots from the age of Stephenson and Brunel jostle with Dow’s tongue-in-cheek explanations of “anorak” (stemming from the “highly practical garment, with many large pockets for notebooks and food, worn while watching trains”) or “the wrong kind of snow”, BR’s most celebrated legacy to colloquial English.

Dow even found employment for his more recent insights as commercial director of the track renewals company Fastline. His last book to be published – in January – was The Railway: British Track Since 1804, which told the history of the permanent way. His research included an inspection of the track on the Forth Bridge.

But his greatest love – after his family – was the LNER, personified by its pre-war chief mechanical engineer Sir Nigel Gresley. Dow claimed that the initials of the rival Great Western Railway really stood for “Gresley Was Right”.

Recently, as vice-chairman of the Gresley Society, he had been one of the prime movers behind a plan to erect a statue of Sir Nigel at King’s Cross station. The bronze was commissioned, Dow drummed up the necessary funding and the unveiling was put in the diary for the 75th anniversary next year of the locomotive engineer’s death.

The statue also included a duck, standing beside the great man, representing the A4 class Pacific Mallard, which in 1938 set a still unsurpassed record of 126 mph for a steam-hauled train. Gresley himself had kept ducks on his estate.

Gresley’s grandsons felt, however, that siting a waterfowl on the same plinth would “demean” the statue, and after some controversy the Gresley Society agreed to let the duck go. Dow – already suffering from cancer – and two fellow supporters of the project resigned.

Andrew Richard George Dow was born at Hitchin on December 1 1943. His father - himself a railway author and later British Rail’s divisional manager at Stoke – had lined the hall and landing of the family’s Hampstead home with railway coats of arms, and gave both Andrew and his sister toy trains.

Boarding at Brighton College, Andrew took every opportunity to visit railway installations, always wanting to know how things worked. But when he left in 1962 he decided not to join the railways, becoming instead an apprentice with Bristol Siddeley Engines.

From 1975 he headed the team in New Jersey selling the Viper turbojet and the Pegasus – winning orders in India and Spain as well as £1 billion worth of business in the United States. Living in America, Dow and his family criss-crossed the continent by rail.

In 1990 Dow was promoted to head of Rolls’s military business, but two years later he left to take charge of the NRM. Big improvements were under way to make full use of the 17-acre site beside York station, and he set out to make visitors’ experience as modern and refreshing as possible.

Even so, Dow’s dynamism was not enough to overcome inertia and vested interests within the Museum, and after two years he left to join the about-to-be-privatised BR.

Though he kept a connection with the Friends of the NRM, he remained highly critical of its approach. He suggested in 2005 to its parent Science Museum that the York institution be given back its independence.

Dow was a particular critic of the NRM’s handling of the overhaul of Flying Scotsman, still not completed when he died, having fallen eight years behind schedule and run considerably over budget. He also considered the Museum to be preoccupied with the giants of steam, asking in 2014: “Where are the displays on HS2, or the problems with the sea wall at Dawlish, or Network Rail’s extraordinary programme of investment?”

He joined BR in 1994 as contracts manager of its Special Trains Unit and commercial manager of BR Infrastructure Services, the company intended to be floated off in chunks to provide competitive contractors for Railtrack. At BRIS he organised a management buyout of what became Fastline, becoming its commercial director.

When Fastline was sold on to Jarvis in 1999, Dow kept Fastline Films, which made instructional DVDs on track maintenance, and produced several more.

In “retirement”, Dow, from his home near York, put his energies, contacts and experience into helping re-create an LNER A1 class Pacific: Tornado. Built at Darlington though with a German boiler, the £3 million locomotive overcame every financial and technical hurdle to enter traffic in 2008.

Dow was involved with several heritage railways and briefly chaired the company re-creating the Lynton & Barnstaple narrow gauge line in Devon, closed in 1935. He was also president of the Stephenson Locomotive Society.

Andrew Dow married Stephanie Murphy in 1973. She survives him, with their son and daughter.

This obituary is published with the very kind permission of The Telegraph.