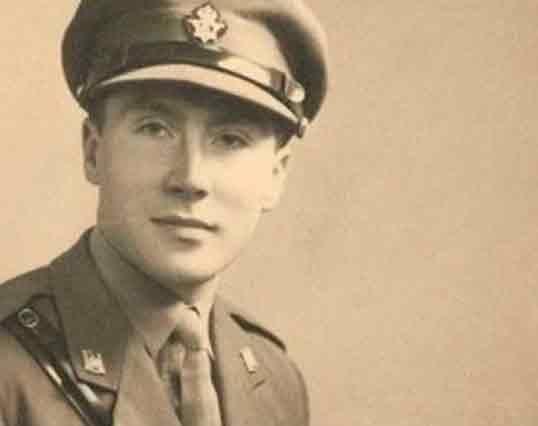 Tony Bray (L. 1939-42), who died on July 2nd 2014 aged 88, was a stockbroker who was identified, last year, as the first serious boyfriend of the young Margaret Thatcher (or Margaret Roberts, as she was before her marriage to Denis Thatcher).

Before Charles Moore published the first volume of his authorised biography of the former Conservative Prime Minister, the line taken by previous biographers had been that, until Denis came along, she had had no romantic friendships with men. This was never likely, as Margaret Roberts had been an undeniably pretty young woman at Oxford at a time when female undergraduates were heavily outnumbered by men, many of whom were servicemen just back from the war.

When Moore asked Lady Thatcher about her early romantic life, she initially maintained the fiction that she had had no boyfriends before she met her husband. But Moore had evidence that she was not telling the whole truth. First, there was her old schoolfriend, Margaret Goodrich, who recalled the young Oxford undergraduate turning up at her 21st birthday party in December 1944 clutching a carnation which “seemed very precious to her” and which had been given to her by an “Oxford boyfriend”. Then there were the letters written to her sister Muriel, which bore witness to an intense romantic attachment to a man named Tony Bray.

Moore tracked Bray down to his home in Sussex and found him happy to speak about the days at the end of the war when he had danced with the future Prime Minister — though he was anxious that his wife, Valerie, who died before the publication of Moore’s book, should not know of his inquiries.

Bray, then an 18-year-old Army cadet, and Margaret Roberts had met through the Oxford University Conservative Association some time in the autumn of 1944 when he was up at Oxford on a six-month military training course. Though short and not especially good-looking, he was, by his own account, “not half bad as a dancer”. Margaret Roberts, who was nearly two years older, he recalled as “a plump, attractive girl in a well-built way” who was always smartly, if not particularly stylishly, dressed. He found her to be “very thoughtful and a very good conversationalist”, and was impressed by her enthusiasm for politics. Though she was “a bit bluestocking”, he liked the fact that she was well-read and enjoyed music. Another reason they got on so well, he felt, was that “she had a degree of loneliness”, which he responded to.

The two had fun together, going out to dances and the theatre. Following the rules of the time, they never slept together. In March 1945 Margaret wrote to her sister about a “marvellous” evening with Tony at the Randolph Ball at which she had worn a blue frock: “[Before going to the ball] Tony hired a car and we drove out to Abingdon to the country Inn 'Crown and Thistle’. I managed to borrow a glorious royal blue velvet cloak which match [sic] the blue frock perfectly.” Tony, she wrote, had presented her with a spray of eight carnations “sent for me from London... I felt absolutely on top of the world as we walked through the lounge at the Crown and Thistle and everyone looked up and stared.” Reminded of the occasion, and of the blue dress, 60 years later, Tony Bray broke down in tears. “It was a very special evening,” he said.

At the end of the Hilary term of 1945, Bray whisked her off for a day in London, which included lunch at the Dorchester, a matinee performance of the Strauss operetta A Night in Venice and a tea dance at the Piccadilly Hotel, before Margaret got the train to Grantham and Bray returned to Oxford. That Margaret Roberts regarded their relationship as serious is shown by her inviting him to stay the weekend with her parents in Grantham soon afterwards.

But it was at this point that Bray began to get cold feet. Still in his teens, he was not looking for commitment, and he thought of their relationship as that of “just a boy and a girl who thoroughly enjoyed each other’s company”. Meanwhile, he found the Roberts household “slightly austere”. During what was clearly a somewhat awkward weekend, he and the Roberts family attended Methodist chapel together. For a public-school-educated boy from a solidly bourgeois background, it was not a jolly occasion.

At the same time Bray was about to undertake full military training at Bovington Camp in Dorset. The following year he was commissioned into the 5th Royal Inniskilling Dragoon Guards and posted to Germany. He and Margaret continued to correspond, but his replies to her letters began to peter out and eventually stopped altogether.

Margaret’s sister Muriel attributed Bray’s cooling off to “snobbishness” about her family; but Bray insisted that, while the Roberts ménage did make him uneasy, it was not because of its relatively modest circumstances, but because of its austere seriousness. He wanted to have fun and doubted that a life with Margaret Roberts would offer it.

Three years later, in 1948, Bray — having returned from military service in Germany and now doing a full degree in Law at Oxford — got in touch with his old girlfriend and the two met on several occasions.

In another letter to Muriel, Margaret, affecting an insouciance that she clearly did not feel, reported that he had given “a full-blooded apology — which I must in all fairness say sounded very sincere”, after which he had “steered the conversation into a lighter vein”. They continued to meet from time to time and in 1949 he sent her a Valentine’s Day card, but the renewed relationship came to an end again that summer. The following year Tony Bray announced his engagement to Valerie Randall, whom he married in 1951.

The story had a curious footnote in the 1970s when Bray, then making a career as a stockbroker, became involved in a study of the housing market and formed the view that it might be a good idea to give council tenants the right to buy their own homes. In 1974 he sent a paper to the Tory Party leader Edward Heath, then in opposition, who suggested that Bray should discuss it with Margaret Thatcher, the party’s spokesman on the environment. She invited him to the House of Commons and he immediately noticed a change in her personality: “She was more the grande dame, aware of her own presence, a little bit condescending.” After making only the briefest of references to their former acquaintance, she got down to the policy, towards which she was very receptive.

When Charles Moore informed Lady Thatcher that he had unearthed the story of her romance with Bray, “She said something like, 'Well, that may have been the case’” but otherwise refused to be drawn.

The son of a businessman, Anthony John Bray was born at Brentford, Middlesex, on April 13 1926 and educated at Brighton College. After leaving school he became an articled clerk to a solicitor.

After graduation, Bray trained as an accountant and went on to pursue a successful career as a stockbroker, moving from Brighton to Coulsdon in Surrey and later to Rustington in Sussex. He remained a staunch Conservative, active in his local party throughout and beyond his former girlfriend’s time at No 10.

A keen traveller, Tony Bray enjoyed family holidays on the Continent and in later years he and his wife made annual visits to Tunisia and Corfu. After his wife became ill he cared for her devotedly until her death in 2006.

He is survived by his four daughters.