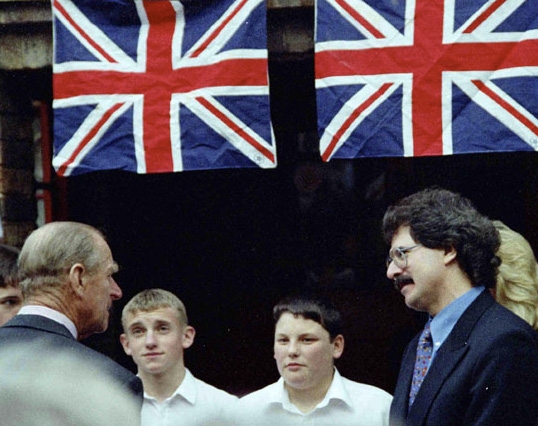 Service of thanksgiving for well-loved theatre star Rick Peckham (A. 1965-69)

It is with great sadness that the OB office reports the death of Rick Peckham (A. 1965-69) just before Christmas. Rick had played with the OB Rugby Football Club in his time, and had kept in touch with many OBs from his days here.

The following article is taken from the Mid-Sussex Times:

Theatre lovers will be among mourners who will celebrate the life of a former leading member of Burgess Hill Theatre Club next week.

Rick Peckham (A. 1965-69), born in 1951, who lived for many years at Birchwood Grove Road, Burgess Hill with his wife Julia, died just before Christmas. He had written for the Mid Sussex Times as a young man before making a business career, but theatre was a strong passion for him and he played a big part in the success of his town's theatre club. After the death of Mid Sussex Times arts writer Mark Gale, Rick, who had moved to the North West, gave a moving and also humourous tribute to him at Mr Gale's funeral at Hurstpierpoint.

Rick had been fighting Motor Neurone Disease and died on December 16 at the Martlets Hospice in Hove.

Family friend and fellow member of the Theatre Club Chris Smith said: "Our deepest sympathies go out to Julia and the families.

"A celebration of Rick's life will take place at his church, St Andrews, Edburton, at 12.30pm on Tuesday the 8th January following a private cremation earlier in the day.

"This is sure to be a very well attended occasion and whilst the family would, of course, appreciate support, it must be stressed that the seating restrictions in this small medieval church are extremely limiting.

"As many of Rick's world wide circle of friends and business colleagues will be travelling from overseas to attend we hope people will understand that, in this respect, they must take priority.

"Regretably therefore only family and invited close friends and guests will be able to sit inside the church.

"Once all other available space in the church has been filled anyone else wishing to follow the service can do so from speakers set up immediately outside."

Mr Smith said parking was also very restricted all those bringing cars should take advantage of the free shuttle coach service operating from the nearby Tottington Manor car park from 11.45am onwards.

Mr Smith said: "Rick requested family flowers only but donations, either to the Martlets Hospice in Hove or to the Motor Neurone Disease Association, would be especially appreciated and these should be sent to Radmalls Funeral Directors, 223, London Road, Burgess Hill, RH15 9QU."

The theatre club will be holding a special evening in memory of Rick on February 2 at 7pm.